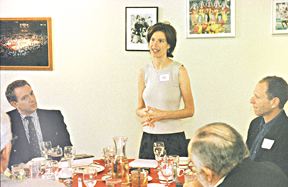 Where do you stage a trial run of your nationwide book tour if you’re a celebrated author living in Los Angeles?

If you’re Susan Faludi, whose latest effort, “Stiffed: The Betrayal of the American Man,” was featured on the cover of the Sept. 13 Newsweek, you head over to the USC Faculty Center for the season’s first meeting of the Los Angeles Institute for the Humanities.

“If this ends up a disaster, I’ll cancel the book tour,” joked the Pulitzer Prize-winning author at a Sept. 17 gathering of 36 institute members.

Her appearance came only four days after the release of the Newsweek article and four days before the launch of a 15- to 20-city book tour.

Such is the rarefied fare that typifies the 1-year-old intellectual meeting ground designed, according to co-founder and Los Angeles Times Book Review Editor Steve Wasserman, “to promote the cross-fertilization of intellectual life in L.A.”

The USC-sponsored institute hosts a twice-monthly luncheon that attracts celebrated authors, academics, artists, museum curators and filmmakers to the Pub at the Faculty Club. Fellows schmooze for half an hour before sitting down to a modest lunch and a 20- to 30-minute presentation by a fellow or an invited guest. A lengthy question-and-answer period follows.

“L.A. is a major cultural center – we’ve got the Getty, MOCA [Museum of Contemporary Art], the Huntington, LACMA [Los Angeles County Museum of Art], USC, UCLA and Caltech – but the problem is, all these institutions lead isolated lives,” said Steven Ross, the institute’s other co-founder and a USC professor of history. “We’re trying to create a climate that brings together an eclectic mix of people.”

THIS IS THE PLACE to hear UCLA theater professor Robert Israel describe the sets he’s designing for upcoming productions of “Fidelio” at New York’s Metropolitan Opera and the Music Center’s “I Capuleti e I Montecchi.”

Or to get the inside scoop from Ronald Steel, a USC professor of international relations and a frequent New York Times contributor, about his much-awaited biography of Bobby Kennedy.

Or to attend the debut book reading for Russ Rymer’s “American Beach: A Saga of Race, Wealth and Memory.”

“We say, ‘You have 20 minutes – what are the ideas you’re wrestling with?’” said Ross, the author of “Working Class Holly wood: Silent Film and the Shaping of Class in America.”

Anybody who wandered into the Sept. 17 invitation-only gathering would quickly realize she was in select company. Syndicated columnist and author Arianna Huffington (“Picasso: Creator and Destroyer”) kibitzed in the Pub courtyard with author, filmmaker and USC cinema-TV associate professor Todd Boyd (“Am I Black Enough for You? Popular Culture From the ‘Hood and Beyond”).

Stephanie Barron, LACMA’s senior curator of modern and contemporary art, whispered at a table with Kenneth S. Brecher, the executive director of the Sundance Institute.

The institute fellows, mostly authors, say they appreciate the opportunity to meet people they might not otherwise.

“If you’re a free-lance writer sitting in your house reporting [over the phone] in your pj’s … you don’t feel connected to a larger structure of people with the same interests,” Faludi said.

The group, which meets the first and third Friday of the month, is modeled on New York’s Institute of the Humanities, which was founded roughly 25 years ago by a group of East Coast intellectuals, including Susan Sontag. The New York group also meets at a large, respected and centrally located urban campus – New York University.

“It’s the glamorous gathering place for academics and non-academic intellectuals,” said Jocelyn Baltzell, who served as associate director of the New York institution for a decade before agreeing to serve in the same capacity for the USC-based group. “We’re the upstart competitor.”

New Institute Hosts a Meeting of Minds at USC