Since Pasadena’s Gamble House became an architectural site in 1966, more than 1 million visitors have toured the 1908 Charles and Henry Greene masterpiece. They come “to appreciate the uncommon mixture of art and craft,” said Edward Bosley, the director of the house. “Few leave unmoved or uninspired by the richness of detail, materials and craftsmanship.”

Five decades ago, the house was given to the city of Pasadena in a joint agreement with the USC School of Architecture, which manages the site. There has not been a book about this National Historic Landmark in more than 20 years, a period that included a major restoration of the house in 2004.

A book studded with 102 pages of engaging images by photographer Alexander Vertikoff has just been published by The Gamble House/USC School of Architecture and CityFiles Press.

Heirs to the family fortune

The Gamble House: Building Paradise in California includes essays that discuss the Gamble family’s role in the design of the house.

David and Mary Gamble, heirs to the Procter & Gamble fortune, commissioned the house. Their youngest son, Clarence, was 14 years old when the house was built, and he was “an astute observer and a witty chronicler of his family’s activities and travels,” as well as sustaining a lively interest in the construction of the home, noted Bosley. His “Line-a-Day” diary and letters are part of archival records recently discovered in his wife’s papers at the Schlesinger Library, Radcliffe Institute for Advanced Studies at Harvard University. 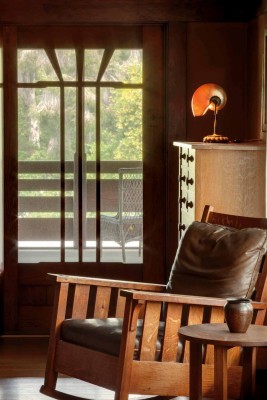 A bedroom in the Gamble House (Photo/Alexander Vertikoff)

In the new book, Anne Mallek, curator of the Gamble House, writes about the family’s history, interests and involvement in the home’s planning and construction. Her essay is enhanced by family photos, letters and vintage images of Pasadena.

Bosley supplies a chapter on the Greene brothers, who trained at the Massachusetts Institute of Technology and were influenced by H.H. Richardson, Japanese architecture and England’s William Morris and the Arts and Crafts Movement.

In Pasadena, the Greenes teamed up with Swedish brothers Peter and John Hall, both excellent woodworkers, to create their distinctive interiors and furniture pieces.

“The most characteristic detail was the rounded surface, painstakingly applied in the Hall woodshop to the outside edges and corners of nearly every piece of wood,” Bosley writes. This added significantly to construction time and expense but, as one observer put it: “[The wood] is like fresh butter or paste squeezed out of a tube — so soft are the surfaces and the corners.”

Ann Scheid, who heads the Greene & Greene Archives at The Huntington Library, gives historic perspective on the design of the home’s garden, as well as the family’s role in developing and maintaining its green spaces. When the home was built, the landscape architecture profession was in its infancy, she writes, so the Greene brothers created their own designs. “We were able to do our best design when we could control a complete landscape and then decorate it, as well as the house,” Henry Greene is quoted as saying late in his career.

Robert Winter, an emeritus professor at Occidental College and a fellow of the Society of Architectural Historians, supplied an essay on “Greene Memories” for the book. The text details his long association with the house and gives background on its active docent program.

The 200-page hardcover book is $60 and will be available from specialty bookstores and museum shops on Sept. 1. It is available online and in person now at the Gamble House bookstore. The store, which has a rich selection of books on architecture and the arts, is located in the home’s original garage at 4 Westmoreland Place in Pasadena.

National board grants the maximum term allowed for bachelor’s and master’s programs.

His voice in design education and leadership will enhance the school’s experiment with new paradigms, dean says.