Established in 1997 by the presidents of the USC, UCLA, California Institute of Technology and the University of California, Berkeley, APRU today connects 45 premier Pacific Rim research universities. Together, APRU universities work to foster cooperation in education and contribute to the economic and scientific advancement of the Pacific Rim. 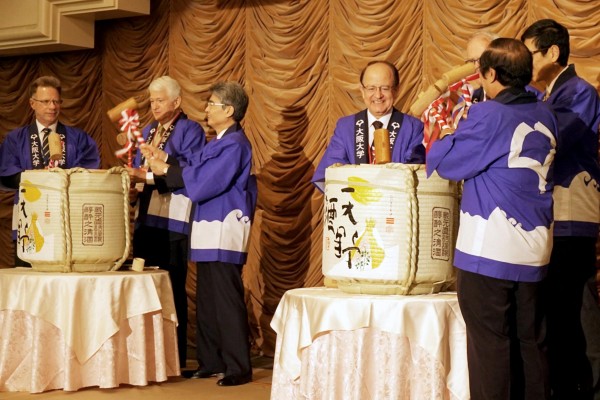 This year’s meeting, themed “The University as an Agent for Global Transformation,” for the first time included a presidential retreat designed to create greater opportunity for leaders to strengthen ties across their institutions.

Nikias stressed that APRU member universities were pioneering transformations taking place across Pacific Rim nations. Describing his vision as APRU’s chair, he added, “I have focused on increasing cooperation among member universities in order to leverage our collective expertise and resources. Our partnerships across public and private sectors support growth and innovation throughout the region, and together, our institutions are natural incubators for the leaders who will confront tomorrow’s most pressing challenges.”

Nikias then traveled to Tokyo, where he met with Japanese Prime Minister Shinzo Abe. A USC alumnus, Abe attended the university for three semesters in 1978, studying English, political science, international relations and history. Nikias presented Abe with a gold-plated alumni card to commemorate his time at USC, and both discussed the need to strengthen academic ties across the region and increase the two-way flow of students between the U.S. and Japan.

USC is proud of its international heritage.

“USC is proud of its international heritage, which includes a history of engagement with Japan and Japanese students dating back to our founding,” Nikias said. “Prime Minister Abe expressed his hope that programs offered through the USC Shinso Ito Center for Japanese Religions and Culture would encourage a growing group of students to learn about Japan, leading to more robust, bilateral exchanges.

“As a university that places tremendous emphasis on providing students with international exposure and global cultural experiences, USC will do its part by widening the scope of these programs and boosting existing ties with Japanese institutions.”

In addition, Abe expressed his appreciation for the benefits of further developing academic cooperation in the Asia Pacific region through APRU member institutions.

This was the second meeting between Abe and this year. In May, Abe returned to campus for the first time in nearly 40 years for a tour that included stops at the USC Shinso Ito Center, Bovard Auditorium and the Von KleinSmid Center, where he attended classes.

Visit to the university he attended in the 1970s wraps up a week of historic diplomacy across the U.S.

Nikias forging closer ties with Japan and the Pacific Rim