Between Shark Week on Discovery this week and Syfy’s upcoming Sharknado 3, sharks are getting plenty of love on TV this summer – but what about the little guys?

“The small things are where it’s at in the ocean,” said David Caron, professor of biological sciences at the USC Dornsife College of Letters, Arts and Sciences, who studies marine microorganisms. Though most are too small to see with the naked eye and less toothy than some other ocean denizens, these creatures are crucial to the ocean ecosystem. Without them, there would be no sharks, no dolphins, no seals, no seafood buffets.

The sea organisms studied at USC include viruses and one-cell bacteria, archaea and protists — and there are a whole lot of them out there. “If you were to line them up like beads on a string, they would make it past the next galaxy,” said Jed Fuhrman, holder of the McCulloch-Crosby Chair in Marine Biology at USC Dornsife. (Just try that trick with a stack of sharks.)

Plus, they get the whole food chain started. Tiny phytoplankton, or microalgae, are the plants of marine microcosm, using sunlight as energy. They get eaten by microbes called protozoa — the microscopic equivalent of herbivores — that in turn become lunch for other protozoa and teensy crustaceans called copepods. Little fish eat the copepods, medium fish eat the little ones … you get the idea.

Every other breath you take is produced by those organisms.

As they harvest sunlight by photosynthesis, phytoplankton also release oxygen, a nice favor to animals. “Every other breath you take is produced by those organisms,” Fuhrman said.

For some microorganisms, acting just like a plant or just like an animal isn’t enough. The protists Caron studies, called mixotrophs, combine photosynthesis with ingestion of other organisms — like miniscule Venus flytraps of the sea.

Caron’s lab has discovered that it’s tough for mixotrophs to manage both kinds of energy intake at once. So they tend to focus on photosynthesis during the day, and then switch their attention to surrounding foodstuffs at night.

To collect these microscopic critters, researchers are forced to endure regular cruises. Caron and Fuhrman jointly run the USC Microbial Observatory, sampling water from the same spot, midway between LA and Catalina Island, every month since 2000. The Microbial Observatory is part of the USC Wrigley Institute for Environmental Studies’ San Pedro Ocean Time Series for oceanography research. 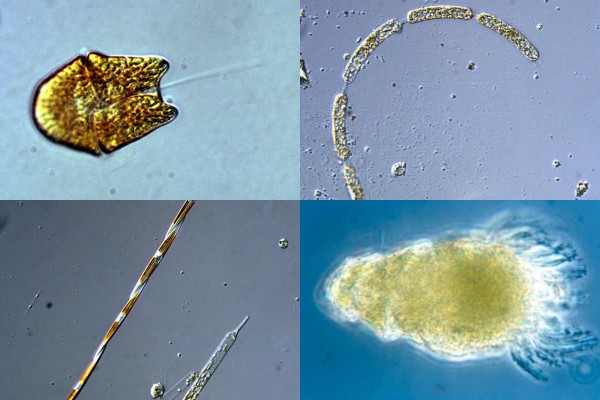 Microorganisms like these pictured on David Caron’s website are key to life in the ocean. (Photo/Caron Laboratory)

What have they learned from those samples? People may think there are no seasons in SoCal, Fuhrman said, but the microbes on the ocean’s surface show that’s not so. Fuhrman sees different kinds at different times of the year, changing with the temperature and sunlight levels. “You can pretty much tell what month it is from what microbes are there,” he said.

And certain microbes have their own version of Spring Break. When the ocean goes from clear blue to murky green, Fuhrman and Caron know they’re looking at an algal bloom. Some of the participating microalgae are harmless, but others make toxins, like domoic acid. Shellfish that feast on the algae wind up full of the nasty stuff, and if they land on your dinner plate, you could suffer amnesic shellfish poisoning, complete with short-term memory loss.

Marine mammals and birds that eat shellfish have the same problem; for example, disoriented sea lions may have seizures and beach themselves. Caron’s lab is studying how these toxic blooms come about, in part by monitoring algae at the Newport Pier every week.

That’s just one of the ways tiny marine microbes exercise their power over the big animals that think they run the planet, though most ocean microorganisms aren’t dangerous to people. What’s more, those microbes have been there for millennia.

A USC scientist digs up information on global climate change by studying oceanic ecosystems and bacteria.

Shark Week gives attention to the big guys, but it wouldn’t happen without the small fry