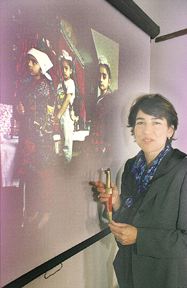 Sikh children were kept out of a school in California because their religion required that they wear a kirpin — a cermonial dagger — like the one being held by Alison Renteln, an expert in human rights law. A decision was made to allow the dagger to be worn once it was rendered harmless.

IN INDIA, PATTING a child on the head is considered humiliating.

Among Sikhs, failing to wear a dagger at all times is believed to incur the wrath of God.

A Gypsy woman who has been touched below the waist by a member of the opposite sex is considered too defiled to marry.

USC political scientist Alison Renteln did, and she thinks more members of the U.S. legal system ought to become more familiar with such folkways.

“People act in a way that appears incomprehensible but makes sense when you understand their cultures and laws,” Renteln recently told a class of 31 veteran law enforcement officers.

Having examined hundreds of cultural defense cases over the past decade, the associate professor of political science is one of the nation’s top foot soldiers in the fight to sensitize law enforcement and officers of the court about other cultures and ways in which their traditions could be misinterpreted.

“She’s clearly the nation’s expert on this issue,” said Peggy Hora, a San Jose Superior Court judge and the past dean of the California Judicial College, which trains all of the state’s new judges. “As the country gets increasingly diverse, it’s incumbent on the justice system to become culturally competent, and we need people like Alison to show us the way.”

SINCE 1993, Renteln has been delivering a unique four-hour class at USC’s Delinquency Control Institute, which provides continuing education courses for police officers.

When she is a guest speaker at law schools, Renteln also tries to raise awareness of the problem among budding lawyers. In addition, she is pressing the state to establish a cultural competency requirement for trial and appellate judges and is involved in the development of cultural competency courses for the judiciary.

“We’ve had a massive influx of immigration to California. We’re seeing more and more of these traditions become a public concern, and we need to pay attention to that,” said Renteln, who studied history and literature as an undergraduate at Harvard-Radcliffe before going on to complete the legal studies program at the London School of Economics and a doctorate in jurisprudence and social policy at UC Berkeley.

CROSS-CULTURAL clashes can sometimes be found at the root of white-collar crime, sexual harassment, child abuse, violations of hunting and fishing regulations – even murder, she contends.

But these cases pose a real challenge in an era when consistent legal guidelines have yet to be developed and longstanding biases tend to favor immigrants who assimilate.

“Liberals and conservatives alike say, ‘We’re all Americans, so we should pay attention to our similarities – not our differences,’” said Renteln, who is also an expert in human rights law. “But to do so ignores the very real rights of these immigrants.”

The daughter of a UC Berkeley professor of folklore, Renteln can’t remember a time when she wasn’t interested in folkways. But the associate professor of political science first became interested in the challenge that other cultures present for the American legal system in 1985, when a suicidal Japanese immigrant was charged with first-degree murder after drowning her two children in the Santa Monica Bay.

“She thought she was doing the humane thing because, according to traditional Japanese culture, it’s considered more cruel to leave children behind with no one to look after them than to take them into the afterlife,” Renteln said.

She enrolled at USC’s Law School after joining the university in 1987 as an assistant professor of political science, reasoning that a legal education would put her in a better position to raise awareness about such cultural clashes. But the need for cultural sensitivity has proven a tough case to make.

“I don’t see any difference between this and claiming that you came from a bad home – it’s just an excuse,” complained an officer from the Northern California community of Hills borough.

Renteln, who has written four scholarly articles on the issue, responded by putting the consequences in terms law enforcement could appreciate. By patting Indian children on the head and inadvertently stumbling onto other cultural land mines, police officers jeopardize the trust and respect of the people they are trying to protect, Renteln said.

At their worst, cross-cultural misunderstandings lead to unjust punishments that tend to get overturned, but only after much suffering and court time, she said.

In 1994, a San Joaquin Valley school district suspended three Sikh children between the ages of 7 and 10 after they violated a policy against carrying weapons to school by wearing kirpins – or the requisite ceremonial daggers of their faith.

While a federal district court upheld the suspension, the decision was overturned by the 9th District Court, which ordered the children back to school, albeit with their kirpins slightly altered for safety purposes. But by that time, the children had missed eight months of school.

Lack of sensitivity can also prove expensive. In 1989, a group of Gypsies in Spokane, Wash., sued the city’s police department for $40 million after officers conducted strip searches on unmarried women suspected of fencing stolen property.

“It’s important to acknowledge that a single mistake can have a wide impact on a community,” Renteln said.