Shortly after he began to treat prostate cancer with androgen deprivation therapy, Rod Shingu started developing belly fat for the first time in his life.

“I was running out of notches in my belt,” said Shingu, a retired hospital administrator who had always been trim.

And though he was spending hours a week on the treadmill, he wasn’t able to halt the fat accumulating on his midsection.

Androgens cause prostate cancer cells to grow. Lowering androgen levels (testosterone and hihydrotestosterone) can cause the cancer cell growth in the prostate to shrink or slow altogether. While keeping the cancer cells in check, though, a number of side effects can take place, including decreased libido, erectile dysfunction, loss of muscle mass, weight gain, fatigue and breast tissue growth. (Source: American Cancer Society)

When he learned that Jackie Kiwata, a doctoral student in the USC Division of Biokinesiology and Physical Therapy, had started an exercise regimen to help men battle the side effects of hormone therapy treatment for prostate cancer, Shingu signed up.

Though not life-threatening, the side effects of androgen deprivation therapy (ADT) can diminish the quality of life for many men as it works to suppress male hormones.

Developing fat and losing muscle mass are common side effects. Some men experience hot flashes and develop osteoporosis and other feminizing effects, including genital shrinkage and breast development.

And while some side effects may subside once treatment is complete, the accumulation of fat and loss of muscle, which can diminish overall physical function, persists even after the treatment is done.

Kiwata knew that many prostate cancer patients need a rigorous program of diet and exercise tailored to combatting the unwanted side effects of hormone therapy to meet their goals.

She designed a 15-week program for men over 50 undergoing ADT and set out to prove scientifically that this course of exercise and protein supplementation can help.

To do so, some study participants work out three times a week with Kiwata and the staff of the Clinical Exercise Research Center on the Health Sciences Campus. Others are only given protein supplements, while some participants do both. There is also a control group.

Shingu had his prostate removed in 2008, went through radiation treatment in 2010 and began ADT in 2012. 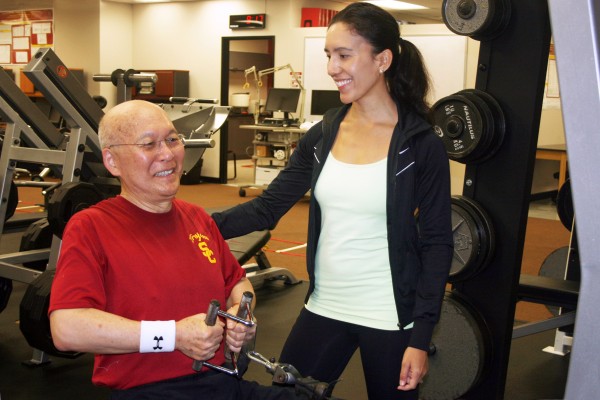 By the time he enrolled in Kiwata’s study in 2013, he learned that ADT might be diminishing both his muscle mass and bone density, in addition to being the source of his weight gain.

Since he started on Kiwata’s exercise routine, which combines cardio and resistance training, Shingu has seen significant changes. He has regained bone density and some of the lean muscle mass he had lost, cutting his body fat from 34 percent to 29 percent.

Losing weight, though, wasn’t the only effect Shingu saw. He says his mood brightened as he felt the stress of the treatment slide away. He even has renewed optimism about his future.

“When I came here, I was completely depressed,” he said, noting that suppressing testosterone makes many men feel dispirited. The weight gain added to the already heavy psychological toll that battling prostate cancer had taken.

We didn’t expect that this would benefit not just their muscle but also their outlook on life.

Kiwata said she has been happily surprised that many of the participants have reported similar mood changes after going through the program.

“We didn’t expect that this would benefit not just their muscle but also their outlook on life,” she said, adding that while her research is ongoing, anecdotal evidence supports that the program benefits both body and mind.

Though Shingu’s stint in Kiwata’s study ended in late 2013, and his ADT ended more than a year ago, he still trains with her three times a week and plans to continue for as long as he can.

“There is no way to describe in words how wonderful this has been,” Shingu said. “She has been my lifeline.”

“She has also turned me into a gym rat,” he said with a laugh.

The couple’s gift demonstrates a commitment to helping the university and continuing a fight against cancer, USC President C. L. Max Nikias says.

The honor goes to exceptional biomedical scientists likely to be among the next generation’s leaders in their field.

There is life after prostate cancer — in the gym