When the going gets tough, the tough … go to Superman School?

That’s the informal name for the rigorous training required to become a pararescueman, or “PJ” (para-jumper). These U.S. Air Force Special Operations Command and Air Combat Command operatives undertake the recovery and medical treatment of personnel in humanitarian and combat environments. Their maroon beret is a symbol of their elite status symbolizing the blood willingly shed by past and current PJs in their efforts to save lives.

The training takes almost two years and is among the longest special operations training courses in the world. Its 80 percent attrition rate is the highest within the entire U.S. Special Operations community.

Jamie Brisbin ’07 was up to the challenge. More than that, he was successful.

After earning his bachelor’s degree in biological sciences at the USC Dornsife College of Letters, Arts and Sciences, he completed a master’s degree in marine and atmospheric sciences at Stony Brook University in 2010. A few months later, he enlisted in the U.S. Air Force.

A man with a plan

“I joined the Air Force specifically to be a pararescueman,” Brisbin said. “It was an opportunity I felt I would not be able to take advantage of later in life, whereas I could always get back into science. I identified very closely with the ideals and purpose of the job.” 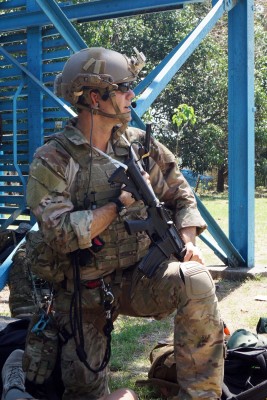 Brisbin in the Phillippines (Photo/ courtesy of Jamie Brisbin)

Brisbin is now part of the 31st Rescue Squadron at Kadena Air Base in Okinawa, Japan. He’s been living there for about a year with his wife, Maggi, who is working on her Ph.D. at the Okinawa Institute of Science and Technology. Their dog, Gnasher, makes three.

“[Pararescue] is an extremely small community within the Air Force,” Brisbin said. “We are a component of special operations forces that are technical experts in personnel recovery. There is an extremely wide range of missions that can include picking up pilots who have ejected in ‘non-permissive’ areas, medevac [medical evacuation] and casevac [casualty evacuation] of injured personnel, civilian search-and-rescue, recovering NASA astronauts, and natural disaster recovery and relief.

We are paramedics who are also trained in parachuting, survival, confined space and collapsed structure rescue.

“We are paramedics who are also trained in parachuting, survival, confined space and collapsed structure rescue, swift-water and technical rescue, mountaineering, helicopter operations and marine rescue and diving. The diving we do is mostly body and weapon searches and recoveries.”

Diving into something familiar

Diving was certainly within Brisbin’s comfort zone. Growing up in Hong Kong and traveling up and down the Asian coast with his family, he was never far from the ocean. Years of surfing, sailing and diving cemented his passion for exploration and marine environments.

It seemed only natural that Brisbin should end up at USC Dornsife, devoting himself to biology, marine science and diving. He also served as vice captain of USC’s varsity crew team, which he said taught him a lot about teamwork — lessons that are integral to his current profession.

During his senior year, Brisbin spent a semester at the USC Wrigley Marine Science Center on Catalina Island, participating in the Catalina Semester program. His final research project investigated the effects of excessive nutrient buildup on soft coral growth. He was also an active volunteer at the USC Catalina Hyperbaric Chamber and served as a scientific diver on several projects.

When he wasn’t in class or at the lab, Brisbin spent most of his time diving. Immersing himself in the kelp forests of Catalina Island quenched his thirst for exploration like nothing else had. He later was selected as the Our World-Underwater Scholarship Society’s 2008 North American Rolex Scholar, which gave him the opportunity to travel around the world for a year promoting marine conservation and stewardship through diving.

Brisbin has positive memories of the time he spent at the Wrigley Marine Science Center and the professors and fellow students he met there.

“It was one of the most enjoyable and influential periods of my life and a fantastic ending to my time at USC,” he said. “I think that meeting and working with smart and inspiring people from all over the world was one of the most valuable parts of my education. The semester I spent at Wrigley has had a huge impact on what I am doing now.”

USC alum is ready to rescue you