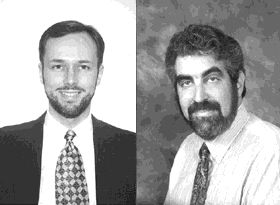 • Merril Silverstein, an assistant professor of gerontology who specializes in the sociology of aging, departed last month for Sweden. Through December, Silverstein will give lectures and conduct research in Stockholm on family and government support to the elderly.

• Daniel C. Lynch, an assistant professor of international relations who specializes in East Asian foreign policy and security issues, departs in May for Bangkok, Thailand. He plans to research oppositional cultures and nationalism in the transition from authoritarian rule.

IN ADDITION, two recent USC graduates and a graduate student have been selected for year-long Fulbright awards.

• Thomas Hall, a Ph.D. candidate in political economy and public policy, left last month for Switzerland, where he will spend a year collecting data for his dissertation on alternative measures of bank fragility.

• Brandon Kohrt, 1998 recipient of a B.A. in psychobiology, left last month for Nepal, where he will spend a year studying jhum-jhum, an obscure neurological condition, with a prominent Katmandu neurologist.

• Lorretta Notareschi, 1999 recipient of a B.A in music, left last month for Hungary, where she will spend a year studying music theory at the Kodaly Institute in Kecskemet.