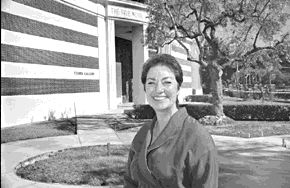 Selma Holo, director of the Fisher Gallery, stands near the landscaped garden area at the gallery’s entrance on Exposition Boulevard. The sculpture honoring the First Amendment will be exhibited in the sculpture garden.Photo by Irene Fertik

WORK HAS BEGUN to install on the USC campus a sculpture celebrating the First Amendment to the U.S. Constitution and recognizing Hollywood writers, directors and actors who were blacklisted in the 1940s and ‘50s.

The sculpture, by American artist Jenny Holzer, will be unveiled during ceremonies Wednesday, Nov. 17, at 4 p.m. outside USC’s Fisher Gallery. After exhibition in the gallery’s sculpture garden, the work eventually will be displayed at other venues around the country and internationally.

According to Margaret Mehring, former director of the filmic writing program in the USC School of Cinema-TV, the unusual project was born in a filmic writing classroom when adjunct professor Max Lamb spoke about the Hollywood 10.

A student, Drew Weinbrenner, told Mehring that he was surprised never to have heard about this period in American history. Her response was to join with Selma Holo, now director of Fisher Gallery, and others to form the First Amendment/Blacklist Project. The project officially began on the 50th anniversary of the 1947 opening of the House Un-American Activities Committee’s investigation of the film industry.

THE PROJECT’S GOAL was to begin an education program and to raise funds for a commemorative artwork. Committee members pledged to raise $250,000 and persuaded Holzer to create a fitting sculpture.

“While Holzer has for several decades been one of our country’s most important artists, she achieved international renown in 1989-90 with her spellbinding exhibition at the Guggenheim Museum in New York City,” Holo said. “No one who saw it will ever forget it. The work was a fantastic liquid crystal sign that wound up the Guggenheim’s spiraling ramp from bottom to top.”

Even today, Holo said, the Hollywood blacklist is a controversial topic on which people of goodwill can disagree. The Holzer sculpture is expected to convey in stone the essence of the First Amendment, encouraging debate and discussion about its meaning:

“Congress shall make no law … abridging the freedom of speech, or of the press; or the right of the people peacefully to assemble, and to petition the Government for a redress of grievances.”

COMPOSED OF stone benches and stone markers, the work will be displayed in a landscaped garden nestled among old olive trees in front of the Fisher Gallery on Exposition Boulevard.

“This beautiful sculpture in a garden setting will provide space and opportunity to people who want to reflect on our constitutional rights as Americans,” said Holo.