By engaging in yearlong Policy Analysis Practicum projects, Master of Public Policy students are trained to conduct thorough analysis for high-profile clients from government agencies, educational organizations, nonprofits and the private sector — “and in doing so, they discover that their work makes a difference,” according to USC Price School of Public Policy Professor Dan Mazmanian.

This year, in particular, the students were able to make a difference on local, national and global levels. 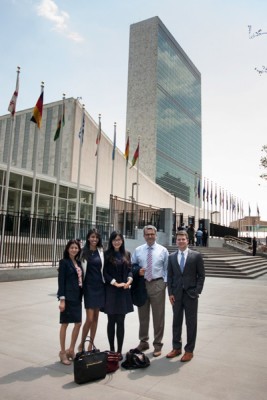 Students also worked with clients from Los Angeles and across the state that included the California Foundation for Commerce and Education, the California School Finance Authority, the California Senate Advisory Commission on Cost Control in State Government, The City Project, Civic Resource Group, the Council for Watershed Health, Innovate Public Schools, the Presidio Trust Group, Price Charities and the Copley-Price Family YMCA, and the Youth Policy Institute.

“What sets apart USC Price’s practicum program from any other in the country is not only the exceptional quality of student work but also the diverse range of projects for very high-level clients,” said Professor Gary Painter, director of graduate programs in public policy, who co-teaches the course with Mazmanian.

One group of students made a difference at the national level, providing solid research about the role of homeownership and home equity in securing retirement income for the Congressional Research Service (CRS).

By analyzing data from 2004 to 2014, the students found that many people possess very little wealth in their retirement accounts, but maintain home equity as a potential source of retirement income. Therefore, the students recommended policies that promote the ability to extract home equity — such as allowing greater flexibility in loan modifications and offering targeted assistance with closing costs.

“I very much enjoyed working with the Price School students,” said John Topoleski, analyst in income security in the income security section of the Domestic Social Policy Division of CRS. “They became engaged with a challenging but important research topic and provided interesting and useful analysis. Their work will help inform Congressional staff and policymakers at the highest levels to understand how to best ensure that Americans have adequate resources with which to enjoy their retirements.” 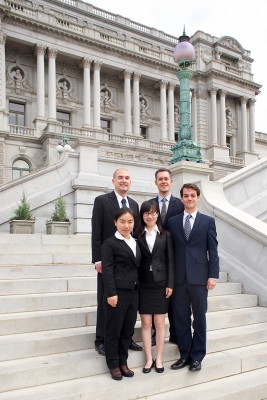 As a result of this experience, student Arthur Bray-Simons III felt inspired to explore consulting opportunities in Washington, D.C.

“Working on the CRS project motivated me to explore consulting for the federal government, and it turns out that I will start working in this capacity in the fall for Deloitte’s federal practice,” Bray-Simons said.

“During our presentation in D.C., I was able to meet several USC alums who I will be in touch with when I move to D.C.,” he added.

Another student group contributed at the state level by analyzing physical education and physical fitness in almost 900 California public school districts for The City Project.

The students found a lower passing rate on the standardized fitness test in districts with a higher percentage of minorities, more free or reduced price meals and lower academic performance index scores. However, non-compliance with California Department of Education physical education law did not seem to correlate strongly with lower passing rates.

“It was a great opportunity to apply the quantitative skill set that we learned in the MPP program,” said student Jenny Power. “Working for a client … helped ensure that our output was grounded in real-world applicability. And it was gratifying to have a client who was so keenly interested in using our final product to further inform their work.”

Cropping up everywhere from Boston to Barcelona and from Seattle to Seoul, innovation districts are high-density urban areas designed to encourage business development by attracting a concentration of companies, universities, startups, incubators, public sector entities, researchers and community groups.

To promote the success of Mexico City’s innovation district, the students recommended the creation of a community business incubator, urban labs, a bicycle share program and the designation of public spaces for murals and street art.

“Working with a client outside the United States was a very good experience for me, and I could say the same for the rest of my group,” said student Jason Patrick Douglas. “We really learned a lot about international business development and how to make people more aware of community development issues.”

Simón Levy Dabbah, director general of ProCDMX, said that he, in turn, learned a great deal from the students.

Their interest in our project gave us the opportunity to receive very important feedback from a group of unbiased people.

“Their interest in our project was very motivating and gave us the opportunity to receive very important feedback from a group of unbiased people with quite a good deal of expertise on the subject matter,” said Levy Dabbah. “They are now part of our Parque de Innovación CDMX project and of a better Mexico City.”

A second student group worked with the Mexico City-based client Fundar. The group made recommendations about increasing the effectiveness of the civilian advisory board that serves as a public space for civil society to engage with the National Migration Institute on important issues.

“After several months of virtual meetings, writing and reviewing of documents and one intensive week of interviewing stakeholders, the students, two of the four bilingual, were able to deliver a report that includes a set of practical recommendations,” said José Knippen, Fundar’s migration project manager. “The findings and recommendations of the report give Fundar strong arguments to push for certain changes on the board that will allow for more effective citizen participation and more transparent migration policy.”

“That class was all about understanding different stakeholders, understanding the policy and political context that goes behind making a change,” Vázquez said.

The team helps the city move toward a cost-efficient supply of electricity.