USC Price School of Public Policy alumnus Tim Collins MHA ’05 led a medical response team to Nepal, where in a span of three weeks the members treated close to 2,200 people who had been injured during the recent 7.8-magnitude earthquake.

Collins, who serves as corporate vice president of operations at Scripps Health, a San Diego-based health care system, coordinated the delivery of aid to communities that hadn’t previously received outside assistance. Working with partners from International Medical Corps (IMC) and Massachusetts General Hospital, the five-person team set up temporary clinics in seven remote, mountainous villages, many of which were accessible only by helicopter.

“For me, it was an opportunity to help people in need and also to bring lessons learned from the tragedy back to San Diego and the community so that we can be prepared for an earthquake,” said Collins, who volunteered for the assignment.

Collins served in an administrative role, doing reconnaissance to set up clinics, coordinating care, identifying sources of water, addressing safety concerns and putting people in the right place. He also used his EMT background in a supportive role by cleaning wounds and checking vitals.

His most memorable experience occurred during the first few days of the trip in the village of Laprok. The village was located hours from the nearest road; most of the ways into the village had been cut off from the world since the quake. Community members told of a man who was critically injured and unable to move for more than a week since his house collapsed. 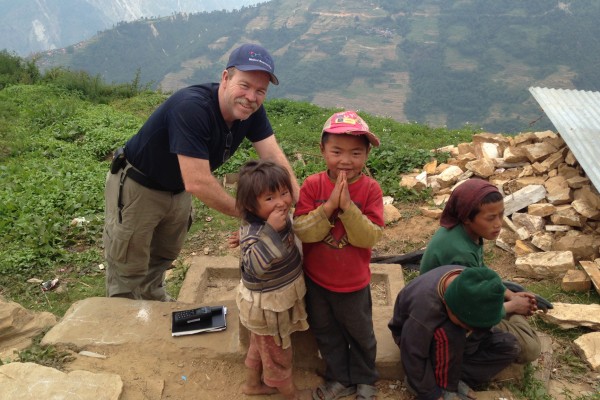 Collins poses with children in one of Nepal’s mountainous villages. (Photo/Scripps Health)

Collins and a physician from IMC ran down a steep 45-degree slope for close to an hour to reach the man, who had suffered a spinal injury. A team that included residents from the community took turns carrying him on their backs up 1,000 feet before finding a gurney. After securing him to the gurney, the team then carried the patient another thousand feet to reach an area suitable for a helicopter to land and pick him up.

“It was an emotional start to the trip that pushed the limits of what we thought we were capable of in order to save the life of a patient who needed our help,” Collins said.

On May 12, Collins and his team were packing up their tents outside a monastery when a powerful 7.3 earthquake struck the region.

The response of the community … is something I will never forget.

“It started with a slow easy roll and ramped up to a heavy roll, unlike the earthquakes we have in Southern California that are more jarring,” Collins said. “We made sure to locate ourselves in a safe position away from buildings and on stable land. There were houses all around us, and the response of the community with people screaming and running out of their homes is something I will never forget.”

Chris Van Gorder MPA ’86, the Scripps Health president and CEO who received his USC Price degree with a focus in health care, established the emphasis on global compassion at the company. Scripps sent medical teams on missions to Haiti after the 2010 earthquake and to the Gulf Coast following Hurricane Katrina in 2005.

“It really begins with Chris, another one of our grads,” said Robert Myrtle, Professor Emeritus at USC Price, who taught Collins in the MHA program and continues to serve as a mentor. “He just believes in making contributions to disaster relief.”

Working toward a common goal

At USC Price, Collins said he learned the value of working with other groups for a common purpose, and he applied the skill to maximize the impact a five-person team could have in Nepal.

“There were a lot of organizations trying to help out in Nepal, and the ones that could tap into the strengths and capabilities of others truly excelled,” Collins said. “At the Price School, with all the different programs and tracks, there was a focus on collaboration and how we should — and need to — come together to act as one team.”

According to Collins, it was also important for him to set an example for his three children.

“I came back with pictures to show them how lucky we are and how we can give back to others,” he said. “My daughter Makenna and I created a slide show together. It was a great way to share my experience in Nepal with her.”

Would the ‘Big One’ live up to the Hollywood hype? Perhaps, but in different ways than the new movie suggests.

USC earth sciences Professor James Dolan tells Seismological Society of America that a major earthquake could trigger large ones on other faults.