A fresh look at a celebrated artist’s life and place in history has received the Robert Motherwell Book Prize — a $10,000 award from the Dedalus Foundation for the author of “an outstanding publication in the history and criticism of modernism in the arts.”

Written by USC’s Megan Luke, Kurt Schwitters: Space, Image, Exile (The University of Chicago Press) explores the latter part of the artist’s life — struggling under the Nazi regime and, later, in exile.

“It’s a beautiful read,” said Kate Flint, Provost Professor of Art History and English at the USC Dornsife College of Letters, Arts and Sciences. “And we’re just so proud of her in the department.” 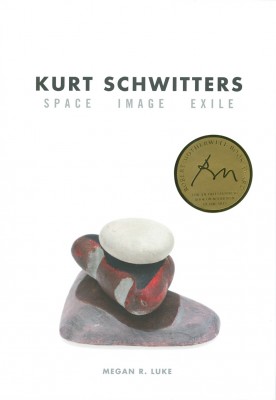 The book is the first for Luke, assistant professor of art history at USC Dornsife, and is a truly ambitious undertaking. Schwitters, a major figure in Dadaism, is considered the father of installation art — pioneering collage work and famously turning several rooms of his house in Hanover into a walk-through sculpture known as the Merzbau during the 1920s and ’30s. That piece is only known to us today through photographs — it was destroyed in a bombing raid in 1943.

On the run from Nazis

Wanted by the Gestapo, Schwitters and his son fled Germany in 1937 — first to Norway, then Scotland and finally England. He continued to create art while on the run, but his work during this period receives less attention than his earlier efforts, in part because it doesn’t fit neatly into popular conceptions of who he was and what he meant to modern art, Luke said.

Scholars tend to think of modern art in terms of revolution and rupture, and it makes for a convenient narrative to see the explosion of World War II as an ending point for Schwitters and the pre-war Dadaism he’s so often associated with, Luke said.

“I’m trying to disrupt some of these institutional ‘-isms.’ They can be useful for introducing this challenging art to students, but they may also obscure how artists can completely change their practices,” Luke said.

Delving into artworks and archives that only survived the war because they were buried in the ground before the Nazis took Norway, Luke pieced together a picture of an artist who remained committed to his experimental approach to making art but was deeply changed by the world that crumbled around him.

You cannot help but have your entire worldview and production change when you’re living out of a suitcase and on the run.

“You cannot help but have your entire worldview and production change when you’re living out of a suitcase and on the run,” Luke said. A life constantly on the move in exile doesn’t lend itself to creating massive walk-through art pieces though Schwitters never lost the sensibility of his earlier works, she said.

While popular conceptions of artists typically paint them as inspired geniuses, operating in solitude, Schwitters enjoyed collaboration. After fleeing Germany, that shifted and he found that he had to “collaborate with his own memory of himself” by recalling his previous creations and connecting to them through his new work, she said.

The book has spawned two book projects for Luke — one in which she looks at the nature of collaboration in modern art and a second in which she investigates the way photography (such as that of the long-lost Merzbau) alters a viewer’s perception of three-dimensional works of art.

Flint credits Luke with an ability to help readers and students understand the way in which artists translate emotions and concepts into two- and three-dimensional works of art and how that art is deeply rooted in the world in which it was created.

“I’m really impressed with how much she cares about her students,” Flint said. “I think she surprises them with how hard she makes them work and how much they learn.”

Luke joined USC in 2011, two years into a four-year postdoctoral fellowship at the University of Chicago. An LA native, she had gone to school on the East Coast and found herself taking jobs back East while she longed to return to her home state.

When the job at USC opened up, she pounced on it, becoming part of USC’s uniquely dynamic take on academia. In particular, she was impressed by her colleagues’ openness and willingness to try new things.

“There’s a lot of trust and engagement, and they encourage people to put new ideas forward,” she said. “If you dream it and believe in it, you can make it happen.”

Luke found out about the Motherwell Book Prize three weeks ago, but had to keep the news to herself until the Dedalus Foundation made the announcement a few days ago.

“It’s just starting to sink in,” she said.

The book describes how Lawrence Halprin shaped American cities during the social tumult of the 1960s.