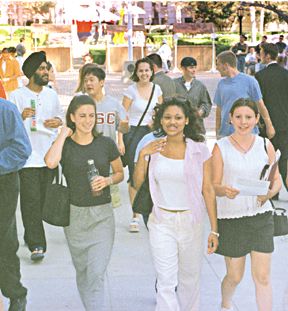 USC freshmen during convocation activities earlier this fall. USC’s student population continues to rank among the nation’s most ethnically diverse: Of the 2,828 entering freshmen this academic year, 46.5 percent are minorities. Enrollment of international students rose 57 percent over the previous year.

USC freshmen, on average, are brighter than ever, university statistics show.

The Class of 2003 entered USC with a better average high school grade-point average than the Class of 2002 – 3.8 versus last year’s 3.7 – according to registration figures from the third week of the academic year.

“A one-year 29-point SAT gain for a class this size is highly unusual,” said Joseph P. Allen, vice provost for enrollment and dean of admission and financial aid.

In keeping with overall university objectives, he said, the freshman class is higher in quality but fewer in number. Out of 24,650 applicants for enrollment in the Class of 2003, only 37 percent were offered admission. That’s the lowest rate in USC’s history. Last year’s acceptance rate was 45 percent.

While USC has grown increasingly selective year after year, the university continues to rank among the nation’s most ethnically diverse. Of the 2,828 entering freshmen, 46.5 percent are minorities, including 365 Latino students and 185 African-American students.

Other notable attributes of the Class of 2003:

• More than three-fourths of the entering students (76 percent) indicated that USC was their first-choice institution. That’s the highest percentage ever recorded at USC in this closely watched marker of campus popularity.

Recruiters credit a heightened awareness of the quality of a USC education.

“The USC undergraduate experience has improved dramatically since we revamped our undergraduate programs three years ago,” Allen pointed out. “In particular, the new general education core program, the new emphasis on interdisciplinary minors, and the new guarantee of smaller classes with senior faculty have resonated with the aspirations of prospective students and their families.”

But if USC’s innovations in undergraduate education have created a surge in interest, it was accelerated by the buzz heard around the nation since Time Magazine/Princeton Review dubbed the university “College of the Year 2000.”

“Turnout at regional receptions for potential applicants is breaking records,” Allen said. “This fall, we’re seeing at least a third more students than a year ago.”

Seems like the competition can only grow fiercer in the years ahead.

“The real payoff to working at one of the hottest schools in the country is in the classroom,” said Morton Owen Schapiro, dean of the College of Letters, Arts and Sciences. “Every year, teaching our undergraduates becomes more challenging and rewarding.”