California can overcome its water woes through conservation, allocation and technology – but it won’t be quick or cheap, Gov. Jerry Brown said Tuesday.

“It’s going to take a lot of money, and you’re going to see it in your water bills,” Brown said at “Water and the West,” a conversation at USC between the governor and Publisher Austin Beutner of the Los Angeles Times and The San Diego Union-Tribune. The event was hosted by USC at Town and Gown on the University Park Campus.

Brown called for a three-pronged approach to California’s water issues: conservation in urban areas, better use of ground water and technological advances. That’s on top of the first-ever mandatory water use reductions he ordered in April. 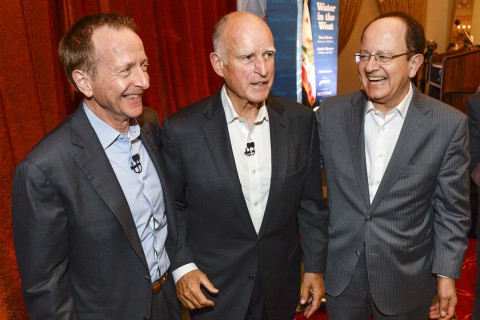 But he acknowledged it won’t be easy: Change comes slowly, and California’s water policies are based on 150 years of history. Add the economic, political and geographic diversity of the state and you have a complex, interconnected issue.

“People talk about how much water almonds take, or walnuts, or alfalfa,” Brown said – but those products bring critical revenue. Even golf courses – notorious for their thirst – are economic catalysts.

“When people say, ‘Stop the almonds, stop the steak, stop this, stop that,’ you’re starting to pick and choose in the invasive way that government isn’t good at, and it would be impossible to forge a consensus,” Brown said.

“It’s not just almonds. It’s people, and how people live.”

Technology will be crucial, Brown said, but it is unknown how soon breakthroughs will come. An example: Desalination plants turn plentiful ocean water into drinking water, but today they’re extremely costly to build and run.

Beutner said that some farmers in inland San Diego County pay $20 – a rate locked in years ago – for an acre/foot of water, about 325,000 gallons. Not far away, water produced at a desalination plant in Carlsbad costs $2,400 per acre/foot.

Despite potential technological advances, Brown said, Californians need to change their behavior: The current drought could end in a year or two – or a decade or two. In the meantime, there’s still only so much water to go around.

“Like every other species, we have to adapt to whatever the environment is that we’re thrown into,” Brown said.

Brown answered a few questions submitted online, including one from a Union-Tribune reader who questioned spending billions on the state’s high-speed rail project when our water needs are so desperate. “We can’t survive without water, but we can survive without the bullet train,” the reader wrote.

Not building the train doesn’t save water.

“Not building the train doesn’t save water,” Brown said. “You can say the same thing about almonds, or steak, or showers.”

In his introductory remarks, USC President C. L. Max Nikias described the water situation as “an issue of concern to all of us.”

Nikias noted that USC researchers are on the cutting edge of technology that uses less energy to reclaim wastewater and desalinate ocean water.

Rodney Swan, who shifted from finance to farming after getting his master’s, focuses on California’s troubling dry spell.

Futurethon at the LA Department of Water and Power teams the USC Annenberg Innovation Lab with creative agency Deutsch LA.