Buffeted by a chilly wind blowing from the choppy gray waters of Southern California’s Salton Sea, a group of USC students stood on the vast inland lake’s southern shore and gazed out across the desolate beauty of the environmentally stricken landscape. Calcified fish skeletons crunched underfoot and the ghostly, blanched trunk of a long-dead tree rose from the murky water.

Led by Jim Haw, professor of chemistry and environmental studies at the USC Dornsife College of Letters, Arts and Sciences, the 16 thematic option honor students from diverse majors were participating in a course on the science of the water-energy nexus in Southern California.

As in the Anza-Borrego Desert to the west, the Salton Sea’s apparently barren vista proved deceptive. A closer look revealed plenty of life.

Dozens of the millions of migrating pelicans and other seabirds that stop here en route to the Pacific Northwest swooped and dove as they fished for tilapia — the only fish that can still survive in the Salton Sea’s polluted and saline-heavy waters. On the other side of Highway 111, evidence of human ingenuity in the search for renewable energy took form in the shape of a geothermal power plant.

“We are looking at water and energy issues through the lens of the Southern California desert, where the effects of a reduced water supply are obvious on the landscape and where a disproportionate share of the transition to renewable solar, wind and geothermal energy will be hosted,” Haw said.

As California experiences an unprecedented drought and recent state-mandated water restrictions, the course could not be more relevant or timely.

Based at a desert research center in Borrego Springs, the group explored the Anza-Borrego Desert and the Salton Sea over a two-week period.

“Many of these students have never seen a desert before,” Haw said. “Now they are empowered to visualize a world with a very limited water budget.”

Anna Duan, a rising junior majoring in health and humanities, said she had gained new respect for the desert environment.

Without intervention, it’s destined to become a major health hazard.

“The course also gave me a new appreciation of water and the Salton Sea, the problems it faces and how it’s not getting much attention from policymakers,” she said. “Without intervention, it’s destined to become a major health hazard.”

Course participants chose their own research focus. Projects were diverse, ranging from the history of California’s complex water rights to the fate of the functionally extinct Sacramento Delta Smelt to a business analysis of real estate in Southern California desert communities. 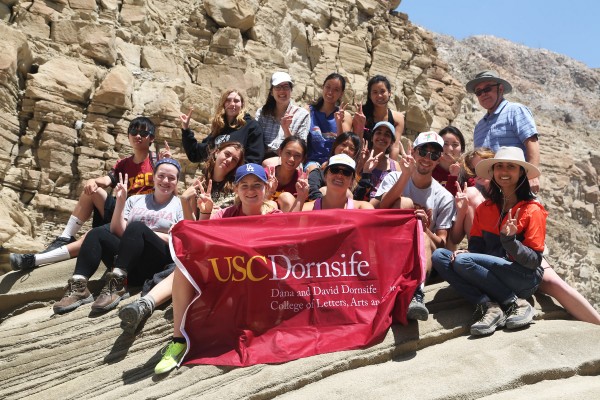 Sixteen students participated in the Problems Without Passports course in the Anza-Borrego Desert. (Photo/Eric Weintraub)

Duan, who plans to train as a doctor and work in public health, opted to research West Nile Virus, first detected in California on the South Shore of the Salton Sea in 2003.

“Every year the virus starts in the Salton Sea, then spreads through Southern California,” she said. “It’s borne by mosquito vectors while birds are the natural hosts. Many birds become seriously ill and some die. Mosquitos then spread the virus to humans who can develop neurobiological diseases, such as meningitis or encephalitis.”

Duan said there is concern that incidences are rising. Her research dovetailed neatly with that of rising sophomore Wendy Xiao, a biochemistry major, who chose to research health risks caused by windblown coarse particulate matter from the Salton Sea’s increasingly exposed lake bed.

“As the Salton Sea shrinks, it exposes more of the lake bed and as winds blow through it, dust storms occur,” Xiao said. “This dust contains agricultural runoff, including nitrogenous waste from fertilizers. This coarse particulate matter is linked to respiratory and cardiovascular diseases.”

Xiao argues that the Salton Sea needs to be controlled to stop it from shrinking until a way can be found to control the dust storms.

People argue we don’t have enough money to restore the Salton Sea. Well, we’re going to have to find the money or we’re going to be paying for the consequences later in terms of public health.

“We can’t let it impact public health like that,” she said. “Economically it doesn’t make sense either. People argue we don’t have enough money to restore the Salton Sea. Well, we’re going to have to find the money or we’re going to be paying for the consequences later in terms of public health.”

However, Duan pointed out that restoration may also carry serious health consequences.

“If we don’t restore the Salton Sea, asthma and bronchitis will increase as the Sea shrinks,” she said. “However, if we do restore it, mosquitos will have more breeding ground, increasing the danger of West Nile Virus. It’s a no-win situation.”

Duan hopes to find a way to effectively control the mosquito population, thereby allowing the restoration of the Salton Sea while avoiding West Nile Virus.

Broad experiences in a unique environment

Guest lecturers included a geologist and an astronomer.

“Borrego Springs is the only Dark Skies Community in California and one of just several in the United States where light pollution is strictly avoided,” Haw said. “So we have some of the darkest nights and very often some of the best conditions for amateur astronomy.”

For Xiao, who fell in love with astronomy in eighth grade, the visit was a dream come true.

“We got to see Jupiter and Saturn and galaxies a couple of billion light years out. It gave me perspective, making me realize how small I am, but not insignificant because I impact other people and the environment every day of my life.”

Haw described the course as a full immersive experience, where students live in the environment they are studying.

“They have additional challenges of living and working together, doing their own meal prep and being responsible for how they conduct themselves in a field station,” he said. “They have all risen to the challenge of performing as young scholars. I’m impressed.

“We are teaching these undergraduates critical skills they can use at USC and later in their professional lives. I want them to have a real boots on the ground, minds in the sky kind of understanding of critical contemporary problems that will shape their experience in California.”

The California drought: What would you ask Gov. Jerry Brown?

USC hosts a discussion of the ongoing water shortage on Tuesday, and you can submit questions for the governor.