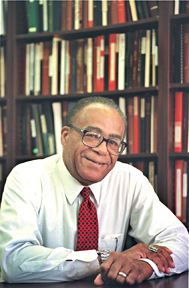 John Brooks Slaughter: “I was impressed with what USC is doing in terms of working with the community that surrounds it.”

John Brooks Slaughter – described by the Los Angeles Times as “one of the country’s most passionate advocates of equal opportunity in education” – has joined the Rossier School of Education as a professor of educational policy and administration.

Slaughter, president emeritus of Occidental College, former chancellor of the University of Maryland, College Park, and former head of the National Science Foundation, is teaching two graduate courses – “The Politics of Diversity” and “Academic Leadership” – at the Rossier School. An electrical engineer, he is affiliated with the school’s Center for Higher Education Policy Analysis.

Slaughter traces his commitment to diversity to being reared in Topeka, Kansas, just before Brown versus Board of Education integrated the public schools.

“I’m committed to the idea that it’s possible to increase academic excellence while at the same time having a strong commitment to equity,” he said. “The most important message I can convey is that we have to be much more sensitive to those goals in higher education.”

Slaughter said he hopes to write about his experiences as president of Occidental from 1988 to 1999 and as chancellor of the University of Maryland from 1982 to 1988.

With a Ph.D. in engineering science from UC San Diego, Slaughter has worked in research and administrative positions at the Naval Electronics Laboratory in San Diego, the Applied Physics Laboratory of the University of Washington in Seattle and Washington State University. In 1980, President Jimmy Carter appointed him director of the National Science Foundation. The following year he delivered USC’s commencement address.

Slaughter left the University of Maryland in the wake of college basketball star Len Bias’ fatal cocaine overdose. Slaughter won admiration for publicly stating that the university had failed Bias and was applauded for firing a popular basketball coach who he felt was not providing the leadership the basketball program needed.

Slaughter joined Occidental in 1988 with the goal of improving the school’s academic standing and racial diversity. At the time, the school – in marked contrast to the community around it – was largely white.

Occidental is now hailed as the nation’s “most diverse” college by U.S. News & World Report, with Asians, African-Americans and Latinos constituting 43 percent of the student body.

Slaughter, a member of the National Academy of Engineering, said he joined USC – despite several other offers – for philosophical reasons.

“I was impressed,” he said, “with what USC is doing in terms of working with the community that surrounds it, which ties in with what we’re trying to do on a smaller scale at Occidental.”

Two USC/Norris faculty members are among seven recipients of academic recognition by the university.