In the spring of 2012, Nick Detrick joined a bone marrow registry by filling out a few forms and submitting a simple cheek swab.

“The whole process took about five minutes,” he said of his experience during a bone marrow drive hosted by the Trojan Knights, a USC spirit and service organization.

Detrick said his desire to become a donor ties into his choice to make physical therapy his profession.

“It’s just in my mentality that if there’s somebody that I can help, I want to help,” he said. “Physical therapy allowed me to combine my passion for being active and learning about the body, as well as helping other people.”

A few months ago, Detrick, now 23, got an unexpected call: He was a match for a patient with cancer and agreed to donate his bone marrow.

“All the doctors I’ve talked to have been on the registry for 10 to 25 years and have never gotten a call,” he said. “It’s really rare.” 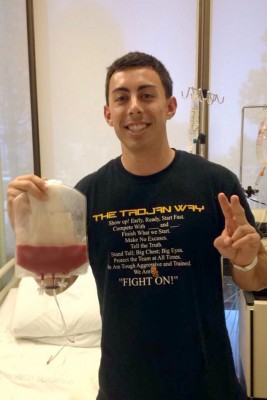 Nick Detrick discovered he was a match for a patient with cancer. (Photo/ courtesy of Nick Detrick)

Once on a registry, the chances of donating are about 1 in 540, according to the nonprofit Be the Match.

Detrick was soon shepherded through a two-month process by Delete Blood Cancer, a nonprofit that promotes bone marrow and stem cell donations. The process included further testing to ensure he was indeed a match and that he was physically able to donate.

As for the procedure itself, “It wasn’t painful at all,” Detrick said. “I got to watch Forrest Gump.”

In the past, donating bone marrow involved a painful surgical procedure in which doctors would retrieve marrow from a patient’s pelvis. Now the more common method, and the way Detrick’s was performed, is called peripheral blood stem cell donation.

For five days before the donation, patients are injected with filgrastim, a drug that moves stems cells from bone marrow into the bloodstream.

When ready to donate, patients are hooked up to an I-V for four to eight hours, depending on their blood pressure and heart rate. Blood is pulled from one arm, passed through a machine that separates stems cells from blood and the remaining blood is returned through a needle in the other arm.

In Detrick’s case, the process was performed at Scripps Mercy Hospital in San Diego with his mom by his side.

Delete Blood Cancer paid for his mother’s flight from her home in Sacramento, as well as for a hotel room near the hospital, Detrick said.

It was a much easier experience than I thought it would be.

“They coordinate everything,” Detrick said of the nonprofit. “They were really accommodating of my schedule as a student. It was a much easier experience than I thought it would be.”

Side effects from the peripheral blood stem cell donation include head or muscles aches — mainly from the filgrastim.

“I felt like I had a hard workout, and my legs felt heavy,” Detrick said. “It’s such a small sacrifice for something that could mean so much to somebody and another person’s family.”

While Delete Blood Cancer keeps the beneficiary of the Detrick donation private, Detrick said he was told the patient has an acute form of leukemia.

“My doctor said because it’s acute, there’s a good chance this could cure them,” Detrick said. “I’m hoping for the best.”

Detrick shares his experience with the hope that more people will join the bone marrow registry.

“It’s really important,” he said. “And it’s not a drop-dead commitment. If the time comes and you do get a call, they’re very accepting … if you decide it’s not for you.”

Those interested in joining the bone marrow registry can request a test kit at Deletebloodcancer.org.

The outgoing president of the USC Alumni Association Board of Governors has served on that board since 2008.

Squishiness has been associated with a tumor’s aggressiveness by researchers.

Breast cancer battle doesn’t keep this Trojan from her degree

Reyna Raya, who graduated from the USC School of Pharmacy on Friday, pursued her degree despite an aggressive form of breast cancer.

It’s a match for a bone marrow donor