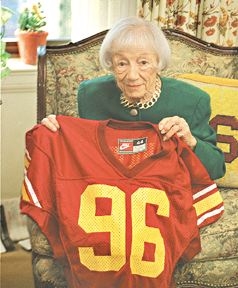 Julie Kohl shows off a new USC football jersey imprinted with her age.

A piece of Trojan history is gone – and it’s likely that most students and many of today’s faculty and staff are not even aware that it’s missing.

Julie’s Trojan Barrel stood for 24 years at Figueroa and 37th streets – a beacon to thirsty USC alumni, coaches and fans after Coliseum events. The venerable ‘SC hangout’s closing in June followed by two years that of nearby Julie’s Restaurant. At different times, both establishments were owned and operated by Julie Kohl.

The Trojan Barrel and Julie’s Restaurant both fell victim to the neighborhood’s changing demographics and to competition from fast-food restaurants and on-campus eateries.

If the Trojan Barrel had not been losing money for years, and if Kohl’s health were better, the 96-year-old proprietress would still be there, chatting up her patrons and instructing her employees on the right way to serve customers.

When USC offered to buy the building to construct a parking lot, Kohl reluctantly agreed. “I’m really sorry I closed it, very sorry,” she said from her memorabilia-filled apartment at the Jonathan Club in downtown Los Angeles. “I enjoyed meeting people, seeing people. The Trojan Barrel slogan – ‘Where old and new friends meet’ – was right on the menu.”

Kohl’s friends are legion. She has known every USC athletic coach since 1941, when she opened Julie’s Restaurant on Flower Street (baseball coaching legend Rod Dedeaux remains one of her favorites). Trojan Band Director Art Bartner and his staff were Barrel regulars, and City Council President John Ferraro, a former USC gridiron star, used to drop by. Current and former USC athletes would come by to say hello and autograph the sports-themed murals painted on the walls by USC art students.

“Julie ran the establishment herself and was there every day, right up until the end,” said longtime friend Rudy Polin. “It was a sad day for her to give it up, but she just felt she wasn’t able to continue to take care of things as they should be. She’s very meticulous.”

Born and raised in Los Angeles, Kohl is the daughter of French immigrants. Her father, Casimir Mazet, owned a French bakery. She learned to make a French dip sandwich from her father’s friend Philippe Matthieu, owner of the historic downtown eatery. Kohl bought Julie’s Restaurant in 1941. Soon she was presiding over a bustling business famous for its outdoor tables set around a swimming pool.

She sold the restaurant in 1975 and quickly opened Julie’s Trojan Barrel a block away, sprucing up what had been a hamburger joint and transforming it into a mecca for Trojan sports fans.

Kohl supported USC athletics and the marching band both monetarily and in spirit. In 1994, she donated more than $100,000 as “seed money” to provide a much-needed home for the band. The new facility in the basement of Stonier Hall was named in her honor.

Kohl was inducted into the Trojan Athletic Hall of Fame in 1995. Every year, she receives from the athletic department a new, regulation football jersey with her age in giant numbers on front and back. Her “97” jersey is on order now.

Kohl threw a party at the Barrel on June 25, her last day in business. Channel 5 covered the event, and the Trojan Marching Band serenaded Kohl with “Conquest” and the Trojan fight song, closing the affair with “Auld Lang Syne.”

Since then, Kohl has been slowed by a mild stroke. For the first time in years, she missed traveling to the Notre Dame football game, but she watched the game on television and is quick to offer an opinion on the results. Kohl still attends home football games in her wheelchair.

The closing of Julie’s Trojan Barrel has left at least two USC units bereft: the marching band staff, which met there weekly for a working lunch, and the geography department staff, which gathered every other week at the Barrel.

In a letter to Kohl last summer, geography professor Curtis C. Roseman wrote: “Having a place like yours for both our serious discussions, and sometimes our silliness, has really helped our group work together. We will miss your place very much.”