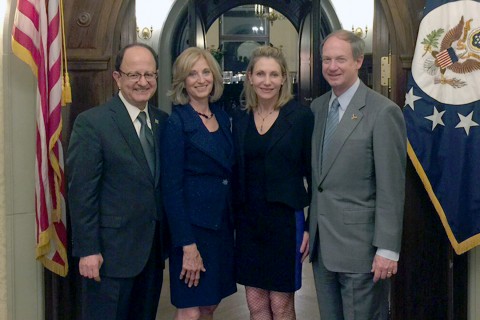 USC President C. L. Max Nikias and his wife, Niki C. Nikias, received a warm welcome on returning to his undergraduate alma mater this week for a special ceremony in front of more than 100 faculty, senior administrators, family and friends.

Nikias graduated from the National Technical University of Athens (NTUA) in 1977 and Tuesday was presented with an honorary doctorate in electrical and computer engineering by NTUA’s vice rector, Dimitrios Papantonis, and dean of the department, Dimitrios M. Tsamakis. Nikias was commended for his achievements as a scientist, scholar and leader, and for being a global Hellenic ambassador. 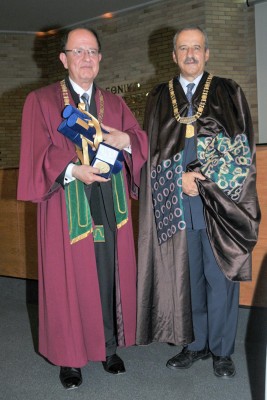 “My time at NTUA represents some of the most important and formative years of my life, and as a result, the university still holds a very special place in my heart. It was a thrill to be invited back, and I was humbled to receive this honorary degree in the company of my esteemed peers, friends and family,” Nikias said.

“NTUA has built a well-deserved legacy as one of the world’s top technical universities. It is a legacy from which I have greatly benefited, and one of which I will always be proud.”

In addition to Athens, the Nikiases visited Germany, where the president delivered a lecture titled “Online Education – Current Realities and Promise for the Future” at the American Academy in Berlin. During their stay in the German capital, the Nikiases were honored guests at a dinner hosted by John Emerson, the U.S. ambassador to Germany, and his wife, Kimberly.

“We were both taken by their devotion and dedication to honorably representing America’s interests abroad,” Nikias said.

Summertime, and the reading is easy

Nikiases wrap up Europe trip with warm reception in Athens