Working alone, a scientist or university can only make so much progress in finding answers to basic questions or new treatments for diseases ranging from HIV to cancer to diabetes. That’s why nearly 300 scientists from USC, UCLA and the University of California, San Francisco gathered in Santa Barbara for a Tri-institutional Stem Cell Retreat.

Hosted by USC from May 17–19, the retreat showcased some of the most innovative projects from the three universities’ stem cell research centers — which were all established with support from Eli and Edythe Broad and the California Institute for Regenerative Medicine (CIRM).

Andrew McMahon, director of the Eli and Edythe Broad Center for Regenerative Medicine and Stem Cell Research at USC, opened the event with a clear articulation of its purpose: “If we want a true measure of success for the meeting, it won’t simply be that we’ve had a good time, but that the scientific interchange between us provides new insights into each of our own specific interests, and new collaborative opportunities emerge as a result.”

Francesca Mariani, the lead organizer from USC, added that these collaborations have the potential to “bring our work at the bench closer to the clinic.”

Holger Willenbring and Hanna Mikkola, the lead organizers from UCSF and UCLA, respectively, both commented on the value of the three institutions coming together to share their research.

The ‘fountain of youth’

Keynote speaker Amy Wagers from the Harvard Stem Cell Institute detailed her quest for the “fountain of youth” by reversing the dysfunction of stem cells in aging tissues such as muscle. 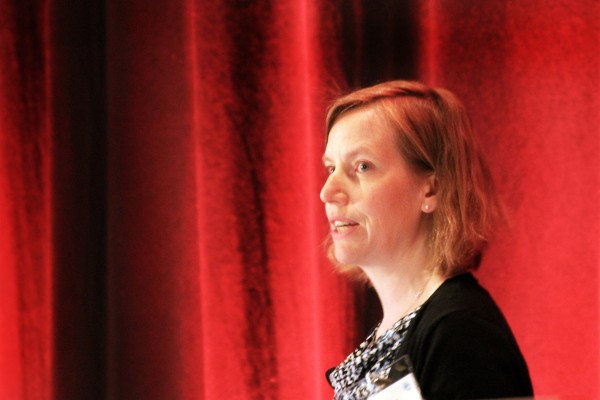 In a striking experiment, Wagers connected the circulatory systems of an old mouse and a young mouse. The old mouse experienced several “youthful” benefits, including a decrease in abnormal heart enlargement and an increase in the regeneration of muscle, neurons and the insulin-producing “beta cells” of the pancreas. Conversely, the young mouse suffered certain ailments of age, including a decrease in the regeneration of muscle, neurons and beta cells. Wagers’ eventual goal is to find ways to use some of these “youthful” blood-borne factors to treat age-related dysfunction.

Throughout the retreat, principal investigators, postdoctoral scholars and Ph.D. students from the three institutions discussed advances relevant to a wide variety of diseases.

As the leading cause of death in the Western world, heart disease was the topic of several talks. USC PI Megan McCain discussed how she engineers micro-scale mimics of human tissues called “hearts on chips,” which enable scientists to study diseases and screen drugs.

Another aspect of the cardiovascular system, the blood, was a popular topic. UCLA PI Donald Kohn discussed curing children with a lethal form of immune deficiency, known as “bubble baby” disease, by correcting the genes in their blood stem cells. Kohn is using the same approach to develop a clinical trial addressing sickle cell disease. His Ph.D. student Aaron Cooper discussed improving methods for gene therapy targeting these stem cells.

Gopalakrishnan commented on the value of interacting with the wider stem cell community: “At least when I’m in the lab, I tend to think about it just from the reprogramming perspective, and it helps us think about other kinds of regenerative models — and there are so many regenerative systems in the human body.”

Continuing the conversation about the body’s sensory organs, USC PI David Hinton summarized the plans for an upcoming Phase 1 clinical trial to treat age-related macular degeneration, the leading cause of blindness in the elderly in the Western world. A partnership with USC colleague Mark Humayun and collaborators at the University of California, Santa Barbara, the California Institute for Technology and the City of Hope supported by nearly $40 million in funding from CIRM, the trial uses stem cells — known as “retinal pigment epithelial cells” — to produce some of the key cells that help people see.

It’s great to meet the students from the different labs that are very active and want to participate.

“This is such a comfortable meeting with a good amount of chances for interaction, and it’s great to meet the students from the different labs that are very active and want to participate,” he said. “Last night, I was so impressed. Everybody was around and talking about their work, and there was a real sense of excitement about the future of stem cell research.”

Tracy Grikscheit, a PI at Children’s Hospital Los Angeles and USC, talked about her work in intestinal regeneration as a treatment for Short Bowel Syndrome, a cause of mortality in infants. UCSF postdoctoral scholar Johanna Schaub discussed how to build a functional liver system from cells called hepatocytes.

McMahon addressed adult kidney repair and its similarities to normal kidney development. Twenty-six million Americans suffer from chronic kidney disease, and many die as a result of the shortage of organs available for transplant.

Cannon and her colleagues have already developed one gene editing tool that could potentially cure HIV/AIDS by introducing a mutation in a gene called CCR5 that confers natural immunity to HIV. Heading into clinical trials, the approach is inspired by the “Berlin patient,” a man cured of both HIV and leukemia through a bone marrow transplant from a donor with a CCR5 mutation.

“This three-institution meeting is really showcasing what powerhouses USC, UCLA and UCSF are and what leaders they are in the whole field of regenerative medicine,” she said.

“It’s a really nice location,” said USC Ph.D. student Marie Rippen. “I was glad to see that a lot of people participated in volleyball, and the hot topics were cool. There are enough breaks that are interspersed, and there’s a good mix of PIs and postdocs that are speaking. So it’s nice to be able to hear somebody talk and then have the opportunity at the coffee break or lunch to go discuss their research with them.”

McMahon concluded the meeting by expressing his hope that the three institutions would repeat the experience next year.

“I’ve learned so much from this meeting,” McMahon said. “It’s a rapidly moving field, so I think we need a retreat next year as well.”