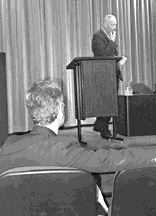 NICHOLAS GARNHAM, professor of sociology and communication at the University of West minster in London, kicked off an international conference on the revolution in education and learning brought on by rapid advances in information and communication technologies. Garnham provoked discussion and debate among the more than 200 conference participants when he disagreed with theorists who believe that the Internet and other new media have created an information-based economy, re placing the industrial-based economy of the 19th and 20th centuries. Garnham said too many people are simply accepting the theory that knowledge-based technologies are the engine driving modern society. William H. Dutton, USC professor of communication, is pictured in the foreground. The Oct. 28 conference, held at USC and the Getty Center, was sponsored by the Annenberg School, the Community Informatics Research and Applications Unit of the University of Teesside/UK, the Getty Center and the Routledge publishing company.

Conference Examines the Impact of the Internet on Society