Tumors come in all shapes, sizes … and squishiness. And it turns out that matters, if you want to know how to treat them.

USC engineers have created a backpack-sized instrument that can gently smush a wide range of materials, accurately quantifying the Young’s modulus — the scientific way to say “squishiness.”

Preliminary testing has found that in general, more aggressive tumors are stiffer, but the complex relationship will require more research, according to the engineers. 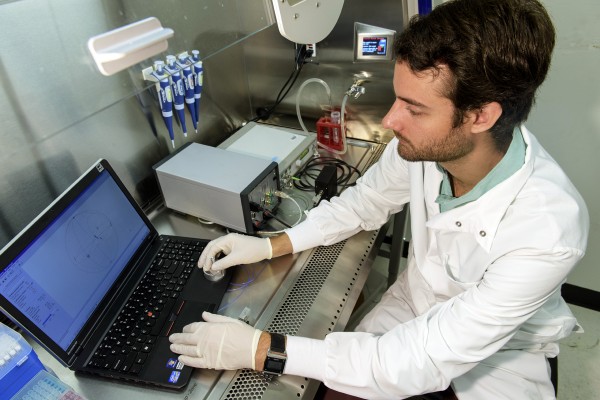 Mark Harrison calibrates the sensor with a sample to be tested. (Photo/Kelvin Kuo)

“The device leaves the sample completely undamaged, which allows researchers to still perform other tests on it,” said Mark Harrison, USC Viterbi School of Engineering graduate student researcher and lead author of the study, which was published by Applied Physics Letters on May 14.

Previous squishiness detectors required time-consuming alignment and were highly sensitive to environmental vibration. To solve these problems, the new device uses fiber optics, taking a cue from the telecommunications industry.

The system squishes a sample on top of the optical fiber, changing the polarization of the laser inside in a predictable way that allows researchers to calculate the Young’s modulus.

“Instruments able to measure a material’s Young’s modulus already existed, but they’re large and require calibration each time they’re moved,” said Andrea Armani, USC Viterbi associate professor and corresponding author of the study in announcing the device, which was created in collaboration with Harrison. “Our device could be carried from hospital room to hospital room and doesn’t need an engineer to operate it.”

Armani, a young global leader at the 2015 World Economic Forum, initially was inspired after a conversation with colleague David Agus, who told her that squishiness had recently been tied to a tumor’s aggressiveness, but he lacked an easy-to-use device for testing that metric.

“This advancement from Dr. Armani is so exciting, as we now have a new dimension of a tumor to measure. We are studying the role of Young’s modulus together with Dr. Armani to help personalize and improve a cancer patient’s care,” said Agus, professor of medicine and engineering at the Keck School of Medicine of USC and USC Viterbi.

In addition to evaluating the device’s role in a clinical setting, there is also increased interest on a more fundamental level: understanding how different types of tumors are related to their mechanical properties. This emerging research field is part of a growing interest in physical oncology — the study of the physics of cancer.

Previous research has placed an emphasis on the chemical makeup of tumors. As such, the majority of current tests to probe the nature of a cancerous tumor focus on its chemical makeup — an important feature to understand, but not the whole picture.

“Physical oncology represents a completely fresh approach to tackling the problem of cancer. It has the potential to provide huge insights as scientists throughout the world try to understand, treat and ultimately prevent cancer in humans,” said Peter Kuhn, professor at the USC Dornsife College of Letters, Arts and Sciences, who helped launch a new peer-reviewed journal on physical oncology last month.

“Given how safe, stable and accurate this instrument is, it could play a pivotal role in both diagnostic and research efforts, providing a rapid method for screening samples,” Armani said.

Armani and Harrison have applied for a patent and will next work with Agus and the team at the Center for Applied Molecular Medicine to test it in a clinical setting. In the future, they also hope to create a more sensitive version of the device that can map the squishiness across tumors.

The research was supported by the Office of Naval Research (N00014-11-1-0910), the National Institutes of Health Director’s New Innovators Award Program (1DP2OD007391-01) and the National Defense Science and Engineering Graduate Fellowship program.

Scientists combine molecules to create a drug that finds and suppresses prostate cancer in mice.

It was purely by accident that Susan Robertson discovered she had kidney cancer. She had been consulting her physician about a separate issue when the malignancy was detected.