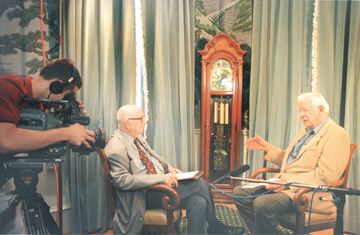 For those who have ever wondered what it would be like if former USC President John Hubbard interviewed James Briscoe about the veteran gate guard’s memories of 30-plus years working on campus, there’s the Living History Project.

After nearly 10 years of gathering the reminiscences of veteran faculty, staff and administrators on videotape, the Emeriti Center has compiled a library of 22 tapes that can be borrowed by future historians or the merely curious (see list).

The list of interview subjects includes two former USC presidents: Hubbard and the late Norman Topping. Others are longtime, distinguished faculty members and former deans; one is a legendary coach. And then there’s Briscoe, who was one of the most recognized employees on campus until he retired last year.

“It’s an exciting list of people,” said Paul Hadley, director of the Emeriti Center and a Living History subject and interviewer himself. “We hope to continue the project indefinitely.”

The project started slowly, without a budget, as the idea of J. Tillman Hall, former Emeriti Center director and professor emeritus of physical education. Hall wanted to preserve on film the memories of longtime USC insiders before it was too late. After the first few filmings proved expensive, the center began looking at less costly alternatives.

Casey Kazlauskas, now a facilities coordinator for the Information Services Division, was then a technician at the former Humanities Audio-Visual Center on campus. “My boss volunteered me for the project,” he said.

After experimenting with different video formats, Kazlauskas settled on super VHS and a one-camera technique. He filmed the interview subject responding to questions in close-up, then filmed the interviewer’s “reaction” shots and an overall scene-setting shot. Then he edited the videotape into a seamless, 30-minute production that has the appearance of an expensive, three-camera shoot.

Now his son, Robert, a junior in cinema-TV, has taken over as the project’s sole cameraman and editor, using the same technique.

The filming is funded for the next three years, thanks to some grants and donations from USC retirees, Hadley said. The center hopes to produce six to eight new videotapes each year.

LAST SUMMER, Hadley interviewed Robert Mannes, former dean of student life. After Robert Kazlauskas set up his equipment in an elegant sitting room at the Widney Alumni House, Hadley began asking Mannes about the changes he’d seen over 45 years as a USC faculty member, including 21 years as dean.

When Mannes came to USC to teach mechanical engineering on a campus “deluged with ex-GIs,” most students were local commuters. Over the years, USC began drawing more ethnic minorities and international students, and housed more students on or near campus. And then, there was the building boom under Norman Topping.

“In the 1960s, when Norman Topping was here, we’d come back from summer vacation and wonder whether our offices would be in the same building, there was so much growth going on,” Mannes said.

Mannes also talked about his decision, unusual at the time, to live near campus. “We have a big, old house, and we could have a lot of students over. I could walk to school, and if there was a program in the evening, I could go home beforehand, or meet my wife here.”

Hadley responded: “I’ve had the privilege of being in your home, and it’s a warm, beautiful place.”

Like many Living History subjects, Mannes has stayed active in retirement, collecting cameras, traveling with his wife, Jeanne, and working with troubled high school youngsters. The couple still live in their 1903 Craftsman house on Severance Street.

Living History videotapes of the recollections of retired USC administrators, faculty and staff can be checked out, free of charge, from the Emeriti Center. To view one of the videotapes, call Madaleen Smith or Mitzi Tsujimoto at 740-8169.