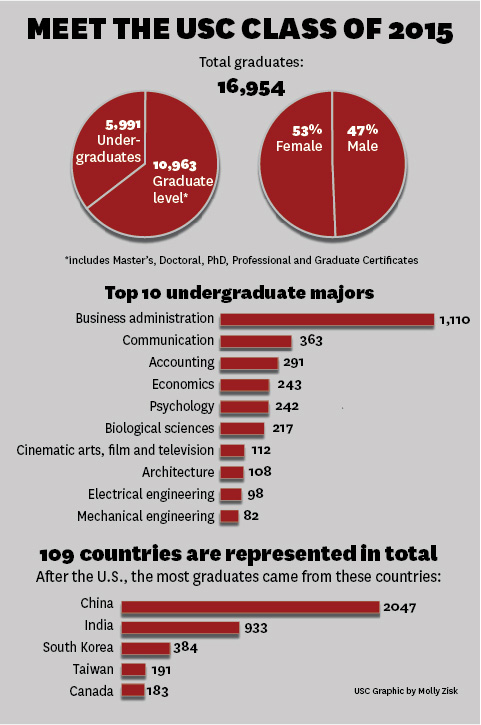 “Bravery,” Hobson told the Trojans, “allows us to push beyond the boundaries that hold us back from living the lives that we want.”

More than 15,000 degrees were conferred to USC graduates, who hailed from each of the 50 states and from more than 115 nations. Despite their varied interests and diverse destinies, Hobson’s advice was applicable to each of them.

“USC has a rich tradition of brave graduates,” Hobson said. “Now it’s up to you to carry on that tradition. Your bravest self will be your best self.”

USC President C. L. Max Nikias lauded the newly minted graduates in Alumni Park, reminding them that “Trojans always seized destiny,” even when skies are gray. (This is the first time in nearly two decades that it rained on commencement day at USC. The last time, in 1996, a reported 0.04 inches of rainfall dropped from the sky.)

“To the bold,” Nikias said, “uncertainty represents a fountain of infinite, creative possibilities pouring out richly for those who are ready to Fight On toward the future.”

It was bravery — coupled with her mother’s love and support — that helped Hobson move beyond the boundaries of cultural stereotypes.

A first-generation college student and the youngest of six children raised by a single mom, Hobson began her career at Ariel Investments as an intern. She became its president less than a decade later. The Chicago-based money management firm has $11 billion in assets under management. 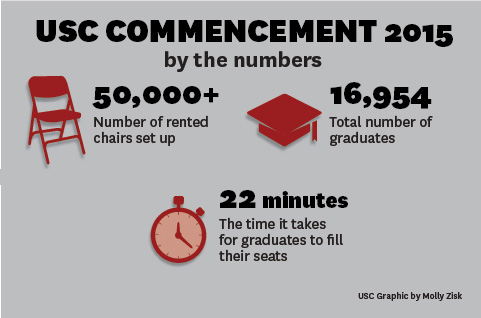 “I hope we can be better at judging people not on assumptions and appearances, but on their achievements and on their actions,” Hobson said. “And here’s how we can do that: Just as how I told you that you can be or do anything, I want you to believe that that’s true of anyone and everyone.”

Bravery enabled 25,000 protestors, on their third attempt, to successfully march on Selma 50 years ago, Hobson said. It’s also how USC students have gone on to accomplish feats large and small throughout their college days.

Hobson was one of six “exceptional individuals” presented with honorary degrees from Nikias. Other recipients were Pete Carroll, who returned USC football to national prominence during his nine-year tenure as head coach, then went on to lead the Seattle Seahawks to a Super Bowl victory in 2014; Kamala Harris, the 32nd attorney general of California; Leonard D. Schaeffer, a USC trustee, holder of the Judge Robert Maclay Widney chair and professor at the USC Price School of Public Policy, and founding chairman and chief executive officer of WellPoint; Michael Tilson Thomas, award-winning director of the San Francisco Symphony and founder of the New World Symphony; and Ada Yonath, a Nobel Prize-winning biochemist who advanced the understanding of ribosomal structure.

I’m confident that the fighting spirit of the Trojan family will never leave us.

Yuen is an aspiring physician who double-majored in biological sciences at the USC Dornsife College of Letters, Arts and Sciences and health promotion and disease prevention at the Keck School of Medicine of USC. He plans to pursue a medical degree at the David Geffen School of Medicine at UCLA in the fall.

“I’m confident that the fighting spirit of the Trojan family will never leave us,” Yuen said. “After all, we’ve made it here to this day.”

It wasn’t long before Yuen and his peers officially became alumni. The graduates, clad in their cardinal caps and gowns, dispersed across the campus, making their way to satellite ceremonies and celebrations that would applaud their successes and societal contributions.

Former Trojan tight end and NFL veteran makes good on his commitment to get a diploma.

We asked graduating seniors to describe how they’re feeling in a single word. Their replies will leave you laughing, proud and inspired.

Novelist Pico Iyer notes the seemingly contradictory nature of life as headliner of this year’s non-denominational event at Bovard.