Gain through loss, moving ahead by staying put — dwelling on these paradoxes illuminated an otherwise stormy Thursday afternoon for those attending the 2015 baccalaureate ceremony, a non-denominational event rooted in the traditions of medieval Oxford.

This year’s program was headlined by British-born essayist, travel writer, novelist and spiritual explorer Pico Iyer, whose latest book, The Art of Stillness, was likened to Thoreau’s Walden by The New York Times Book Review.

USC Dean of Religious Life Varun Soni set the tone with his invocation and welcome to the Bovard Auditorium audience. He related how Shalin Shah ’14, a Peace Corps trainee in Peru last year, had received the news that he had a rare, aggressive form of cancer.

“This is no tragedy,” Shah had written in an email to family and friends. “I don’t even think it is sad in the slightest way, to be honest. My life has been awesome so far.”

The certainty that he would die within the year prompted Shah to make the most of his remaining time, confront life’s deeper purpose and begin to shape his legacy. In a viral article he penned for The Huffington Post under the headline “Thank You, Cancer,” Shah described “what a blessing terminal cancer has been for me.”

After the ashes fall

Later in the program, Iyer built on this paradoxical theme of gain through loss. Introduced by USC President C. L. Max Nikias, the popular TED speaker shared a personal anecdote.

Twenty-five years ago, a wildfire had destroyed his parents’ Santa Barbara home. More than 400 residences were reduced to ashes that day, but in the aftermath, Iyer noticed something interesting.

“Some of the neighbors were traumatized for life: They would never recover. But quite a few others, after a period of adjustment, almost felt a sense of liberation. They had decided this was a chance to remake their lives.”

Some years earlier, Iyer himself had experimented with a voluntary sort of abnegation when he deliberately walked away from his dream life.

“I had a very exciting job writing on world affairs for Time magazine, an apartment on Park Avenue … really interesting colleagues,” he recalled. Sensing, however, that something important was missing, he uprooted himself and moved into “a single room on the back streets of Kyoto, with no private toilet or telephone, and not even a bed.”

Making a living is not the same thing as making a life.

“As soon as I was in this little room, where nobody could call and I didn’t have a computer … I forgot myself, I forgot my time, I forgot where I was, which to me is almost the definition of happiness,” he said. “The days seemed to last a hundred hours.”

While Iyer did not recommend that students in the Bovard audience repeat his experiment, he offered the following insights:

In another revealing paradox, Iyer noted that “the people who are most committed to unplugging from technology and [to] stillness are actually the ones who have created our amazing new technologies.”

He pointed to Twitter co-founder Evan Williams, a passionate practitioner of meditation, and to widespread observance in Silicon Valley of the “Internet Sabbath,” when large numbers of techies “go completely offline from Friday night to Monday morning” to recharge their creative batteries. 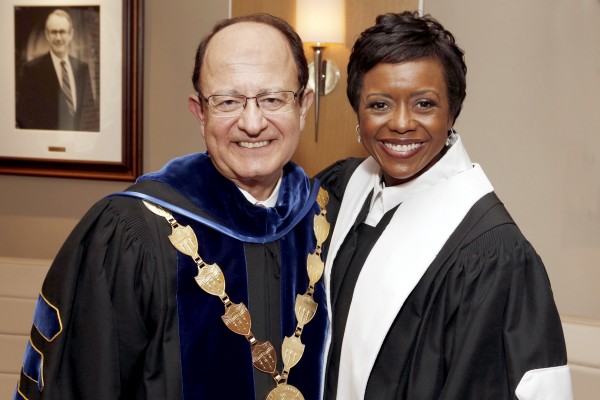 “They know that our wonderful new devices have given us everything except a sense of how to make the wisest use of the devices,” Iyer said. “Just as a car can’t yet teach us how to drive or where to go, so too technology cannot show us where to go or how to be. For that you must look inward.”

Interspersed between prayers, readings and speeches were musical performances by the Trojan Brass ensemble, the USC Thornton Chamber Singers, the four-time international a cappella champion SoCal VoCals and a goosebump-inducing rendition by USC Thornton popular music major Malia Civetz of John Legend’s “If You’re Out There.”

The actor, comedian and Bahá’í follower offered a message of gratitude and introspection, along with moments of humor.