When Alexander Yuen steps to the podium on Friday to give his valedictory address at USC’s 132nd commencement, it’ll be with a sense of trepidation and déjà vu.

The last time he tried this — four years ago, as valedictorian of Elk Grove High School near Sacramento — he’d promised himself never again.

“I’m not the best speaker,” said the self-deprecating young man with a 4.0 GPA and a double major in biological science and in health promotion and disease prevention studies.

He’s more comfortable behind a microscope than in front of a crowd of 40,000 people. But as Yuen’s senior year rolled around, he felt a moral compulsion to speak again.

USC has fostered my growth in so many ways.

“I applied to be valedictorian because my conscience didn’t leave me another choice,” he said. “USC has fostered my growth in so many ways, including in public speaking, that I felt I had to honor the university.”

That sense of duty, honor and humility — qualities one might expect to find in a soldier, not in a future physician — runs deep in Yuen.

Asked why he wants to be a doctor, Yuen replied, “Because it’s the right thing to do.”

For years he’s watched his father, a pulmonary specialist at Methodist Hospital of Sacramento, work with the most critically ill patients.

When he was old enough, Yuen started volunteering in the emergency room and intensive care unit. He sees his own future working in critical care, though his mother — a first-grade teacher whom Yuen describes as “a miracle worker” — would prefer he choose a less emotionally and physically taxing specialty, having seen the toll it takes on her husband.

“It’s hard,” Yuen explained, “working with extremely sick or extremely injured patients. But it’s what we go into the medical profession to do. It’s an honor to serve.” 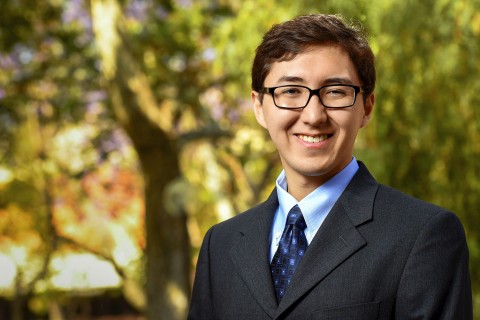 The decision to come to USC was easy. Yuen didn’t apply any place else. He’d been dazzled by the glowing accounts from Harry Khasigian ’70, MD ’74, an orthopaedic surgeon at Methodist Hospital. A summer spent in the university’s Future Physicians pre-college program confirmed everything Yuen had heard.

“I fell in love with USC,” he recalled. “I was introduced to the traditions, like kicking the flag posts. I sat down with George Tirebiter, who reminded me of my own dog. There was an air of tradition and knowledge permeating the entire campus. I absolutely loved it.”

The last four years were packed with life-changing experiences. Through the Freshman Science Honors program, Yuen got to work in the lab of biological oceanographer David Caron focusing on Pseudo-nitzchia, a phytoplankton species capable of causing harmful algal bloom events. Pseudo-nitzschia produces a neurotoxin that, if ingested by humans, causes a condition known as amnesic shellfish poisoning, resulting in severe memory loss, brain damage and even death.

He was shocked to discover how many Angelenos rely on such events for basic care and consultations.

I started realizing the need for doctors to be involved in the community as providers of public health services and information.

“I started realizing the need for doctors to be involved in the community as providers of public health services and information,” he said.

The realization prompted Yuen to add a second major during his sophomore year, in health promotion and disease prevention studies, and to take on leadership roles in APAMSA. He’s been the group’s president for the past two years.

This fall, he’ll enter the David Geffen School of Medicine at UCLA.

“I’m going to finally learn to be a physician,” he said. “Learn the clinical science, interact with patients, be the doctor I aspire to be. And serve Los Angeles for another four years.”

IN HIS OWN WORDS

What’s your best memory at USC?

It was the summer between freshman and sophomore years, and I was a residential adviser in the Future Physicans program. I had started volunteering in Dr. Caron’s lab: He was willing to have me there to see if I would be a good fit. One day they updated the rosters for the labs and I saw that my name was on the list. I got way too enthusiastic! I was taking pictures of it with my iPhone. I did a little dance right in front of the security camera.

What are your favorite places on campus?

When I was a freshman, I would always head over to the Chapel of Silence. Now when I take a walk around campus, I usually go over to the bench by George Tirebiter. It’s probably my favorite location on campus.

What is your biggest regret?

Not getting involved in the many sports and outdoor activities at USC. I’m not the most athletic person, but I wish I’d done more of that.

Are you sad to be finishing?

It’s a bittersweet moment because I know friends and classmates will be dispersing. But staying in LA means I can be connected. I’m definitely going to attend my Ph.D. student’s dissertation defense. [Ph.D. student] Jayme Smith taught me all the lab techniques I have.

What advice do you have for freshmen?

Stay humble. Coming to USC exposes you to different opportunities. If you were to approach these opportunities from the mind-set of someone who had made it, come to USC as a hotshot, then you wouldn’t be able to learn as much.

Artist Joshua Ramirez confronted his own mental illness; now he teaches educators about the issue.

Natalie Tecimer has become an advocate for hearing-impaired children worldwide.