The grounds of The Gamble House, USC, in Pasadena were transformed into a magical array of twinkling lights and farmhouse tables as the USC Architectural Guild gave its 2015 Distinguished Alumni Award to Kelly Sutherlin McLeod ’82, ’83, the architect who oversaw renovations of the historic Greene and Greene masterpiece.

McLeod received her award at the 56th annual USC Architectural Guild Dinner on May 6. Newly installed USC Provost Michael Quick spoke at the event, as did USC School of Architecture Dean Qingyun Ma and architect Martha Ball ’85, the Guild president.

Edward Bosley, the James N. Gamble director of The Gamble House, welcomed Guild members and friends to the 1908 Craftsman home, considered one of the finest examples of residential architecture in America.

He and others noted that since USC took over responsibility for the home in 1966, two USC Architecture students have lived in the National Historic Landmark every year. 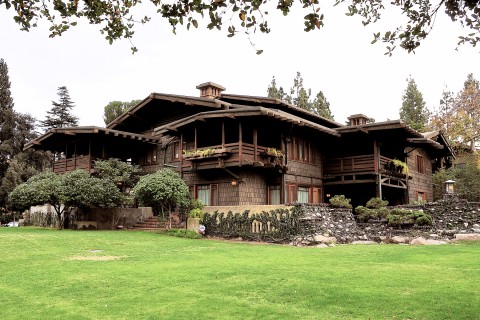 The Gamble House is considered one of the finest examples of residential architecture in America. (Photo/gamblehouse.org)

One of those lucky students during her senior year in 1981 was McLeod — the first woman to be selected. Living there was an experience that planted the seeds for her professional interest in heritage conservation. Two decades later she was the project architect on a $3.5 million conservation and seismic retrofit of the Arts and Crafts structure.

McLeod, the principal of Kelly Sutherlin McLeod Architecture Inc., in Long Beach, has restored several of the most important 20th-century masterworks in Southern California, including works by Charles and Henry Greene, Richard Neutra, R.M. Schindler, Frank Gehry ’54 and Edward A. Killingsworth ’40, as well as the Centenary Restoration of The Japanese House and Gardens at the Huntington Library, Art Collections and Botanical Gardens.

Quick thanked the Guild for its long-standing commitment to USC. The Guild’s financial support is enormously appreciated, he said, “but of equal importance is your role as mentors and advisers, connecting faculty and students with the architecture community.”

Quick noted that McLeod and her firm will lead the renovation architecture on the USC Pacific Asia Museum over the coming years.

“If her work on The Gamble House is any indicator of the quality we can expect, I’m sure the USC Pacific Asia Museum will stand among the most impressive structures in the region,” he said.

Janice Jerde, wife of the late Jon Jerde ’66, the first recipient of the Distinguished Alumnus award 30 years ago, presented McLeod with her commendation.

Before introducing Jerde, Ma paid tribute to her husband, a visionary international architect known for reinventing the shopping center as an experiential and entertainment destination.

During his career, Jerde remained strongly connected with USC Architecture as a teacher in design studios on campus and in France as a member of the school’s board of councilors, endowing an academic chair and establishing the Jon A. Jerde Traveling Fellowship with his wife.

Janice Jerde noted that as an architect herself, she thought it was especially significant for USC to honor a woman in the profession and to have McLeod be the first woman it has awarded this honor.

She serves as a shining example to young female architects.

“Kelly has the trifecta we all want: a notable career, a long marriage and a lovely family,” she said. “She serves as a shining example to young female architects.”

As was noted in a tribute video shown at the dinner, McLeod has brought conservation architecture into the mainstream.

Brenda Levin, president of Levin & Associates Architects, herself a well-known preservation architect, put it this way in the video: “Kelly is a scholar in Japanese architecture, Greene and Greene and midcentury modern. She is able to bridge many worlds, and she is doing it with great skill and talent.”

The video also included admiring remarks from Gehry; Robert Harris, former USC Architecture dean; Christina Yu Yu, director of the USC Pacific Asia Museum; Trudi Sandmeier, director of USC’s graduate programs in heritage conservation, and several others, along with a look at many of her projects. 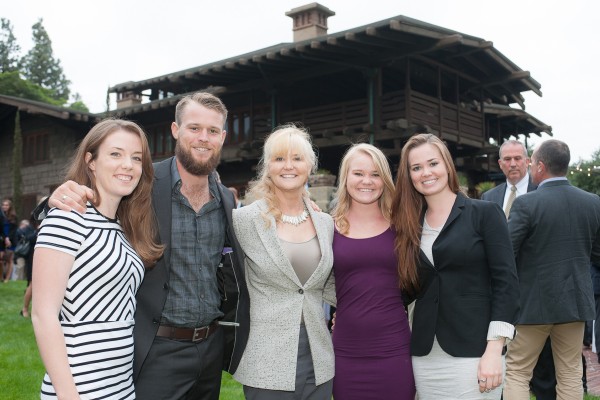 Guild president Ball, of the firm Harley Ellis Devereaux, recounted a few of the organization’s achievements, including doubling the number of members who mentor current USC Architecture students, holding its most successful fundraising golf tournament to date and sponsoring a well-received Career Week on campus that culminated in a sold-out Firm Fair.

Before she turned over the podium to incoming Guild president Daun St. Amand ’76 of RTKL Inc., Ball expressed her hope that the Guild would help USC continue to expand access to first-generation college attendees by creating a new scholarship for an incoming freshman studying architecture who is the first in his or her family to attend college.

“I’d like my legacy as Guild president to be helping give a chance for the future to those coming behind us,” she said.

Record number of firms turn out at USC Architecture fair

Record crowd turns out for this week’s workshops with designers and researchers.

National board grants the maximum term allowed for bachelor’s and master’s programs.

The estate of the late Randell Makinson has given his extensive research papers to the USC School of Architecture.