Bart Simpson will forever have a home at the USC School of Cinematic Arts.

Nancy Cartwright, the voice of that iconic TV character on The Simpsons, commemorated the Fox animated comedy’s 25-year run by creating a bronze statue of Bart’s masked alter ego, Bartman, who first appeared in the show’s second season in the episode “Three Men and a Comic Book.”

The statue is now a permanent installation in the Harold Lloyd Lobby in the Steven Spielberg Building.

At the statue’s unveiling on May 8, Dean Elizabeth M. Daley emphasized the school’s long-standing connection with the show.

“The Simpsons already has roots here at SCA, co-created by close friend of the school and Comedy@SCA master class Professor James L. Brooks, and, of course, produced and distributed by Fox. I’m so excited to extend those ties today and thrilled that Nancy chose SCA to be the permanent home of Bart Simpson.”

That excitement was shared by the voice of Bart herself as she took the stage.

“Twenty-five years ago, as you all know, the world was introduced to this underachiever Bart Simpson,” she reminisced. “He was in the fourth grade and he had just flunked his final exam when he blurted out, ‘Who am I kidding? I really am a failure. Now I know how George Washington felt when he surrendered Fort Necessity to the French in 1754!’ And at that moment, with that little bit of trivia, Bart listened to Mrs. Krabappel as she awarded him with an extra point. To which Bart responded, ‘I passed! I passed! I got a D-! I passed!’

I am quite sure that Bart Simpson does not meet the qualifications necessary to go to such a prestigious and trendsetting university as USC.

“I am quite sure that Bart Simpson does not meet the qualifications necessary to go to such a prestigious and trendsetting university as USC,” Cartwright told the packed crowd in Meldman Family Cinematic Arts Park. “But I also find it deliciously rewarding that USC has welcomed the bust of the Bartman! I am truly touched to introduce him to your campus. And don’t worry, after 25 years, Bart Simpson is still in the fourth grade.” 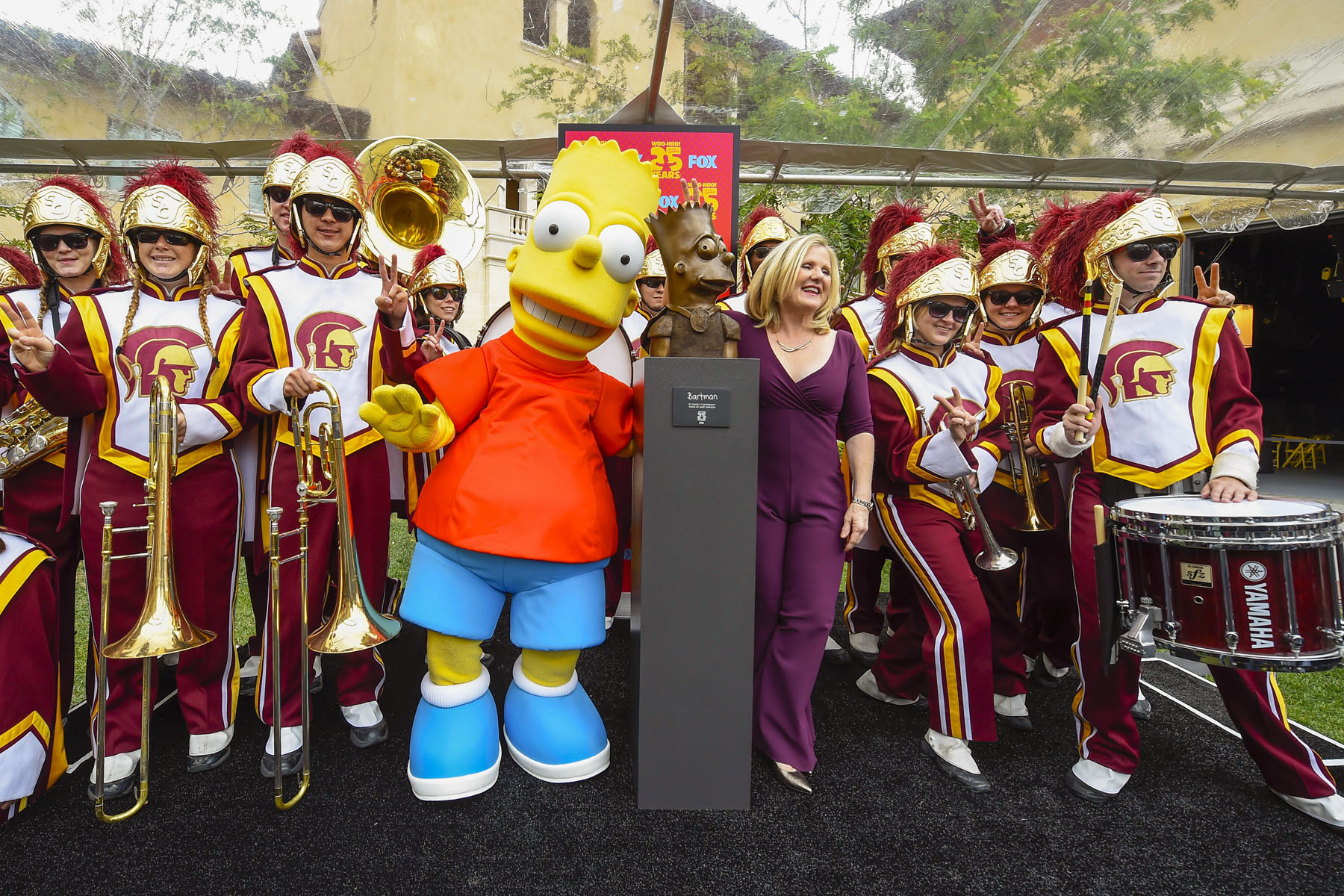 Cartwright celebrates the unveiling of the sculpture with help from the Trojan Marching Band. (USC Photo/Gus Ruelas)

It’s hard to imagine the ascendant landscape of modern animation without The Simpsons. In its remarkable quarter of a century on the air, it has become a cultural touchstone, referenced and revered in every kind of media. Its writers’ room has been a proving ground for countless comedic minds-turned-TV-powerhouses, such as Greg Daniels (The Office), Mike Scully (Parks and Recreation) and Conan O’Brien. Even today, few shows have been as effective at blending sharp satire, slapstick gags and warm family comedy so seamlessly.

Over the years, the show has won all kind of awards and unique distinctions, from earning more than 31 Emmys to being the first animated show ever to win a Peabody Award to having episodes immortalized and discussed in depth in theological textbooks around the world (see: season four’s episode “Bart Sells His Soul”).

Longtime fans of the series praise the show’s wit and adaptability, while some critics may deride it, with no small amount of irony, as the “Worst. Show. Ever.” — a phrase that one of the show’s hundreds of satirical side characters, Jeff Albertson (aka Comic Book Guy), coined and cemented into the pop culture pantheon.

Could TV use a female MacGyver? Here’s how to fix that (sans duct tape)

USC Viterbi collaborates on crowdsourcing competition enlisting Hollywood producers to create a show that would inspire women to be engineers.

Howard Rosenberg’s symposium offers everything students need to know for a career in Hollywood.