With her own game design studio and an award-winning game to her name, Erin Reynolds ’12 has made great strides in the gaming industry since graduating from the USC School of Cinematic Arts. Reynolds recently discussed her time as a student, shared her thoughts on the future of game design and recalled her accomplishments as a game designer.

How did you know that you wanted a career in the gaming industry?

When it came time to start my undergraduate career, I knew I wanted to focus my studies and career goals on something that allowed me to combine art and technology. At first, I actually thought animation might be a good fit for me.

I found myself becoming very interested and involved in visual effects and soon joined USC’s special/visual effects student organization, SCFX. It wasn’t until an SCFX tour of a few game studios that it fully dawned on me that one could actually work in games — I’m not sure why that hadn’t occurred to me sooner. It was immediately apparent to me that this was where my heart truly lied.

How has being an SCA alum impacted your career?

My time with SCA not only taught me about the gaming industry, but also about ways to look at the game and entertainment industry simultaneously from an artistic, technical and business perspective. Guided by my professors, mentors, classmates and fellow alumni, I feel like SCA has uniquely equipped me with the ability to see all the pieces of the big picture. Whenever there are areas that I am unfamiliar with or unsure about, I know that there is someone in the SCA family that I can turn to for help, advice and to help spark new and intriguing ideas. It’s an amazing community — one that I’m always learning from and am so proud to be a part of.

What can you tell us about the rapid evolution of game design? What new and innovative technologies make this progress in the gaming world possible?

Independent of design itself, it is both exhilarating and overwhelming to see how quickly game development software is evolving. Now there are programs out there that allow anyone to quickly translate their game ideas into a prototype with very little in-depth programming knowledge.

What excites me the most about game development tools becoming increasingly more accessible on all levels is that it opens up the door for more people with diverse backgrounds and knowledge bases to tell their stories and share their vision with a larger audience than ever via digital interactive media. It’s a truly exciting time to be a game maker and game player. Over the next few years, I think, due in large part to many of these new game development tools, gaming and interactive art is going to become even more pervasive, impactful and culturally complex than ever before.

What can you tell us about your journey with your studio Flying Mollusk? 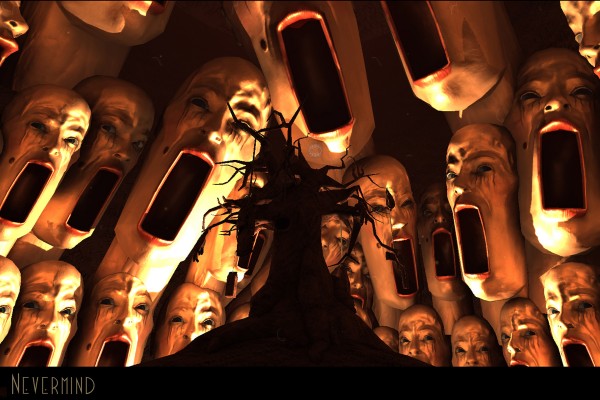 Nevermind is a first-person biofeedback-enhanced horror adventure game that gets more challenging as you get more frightened. (Image Courtesy of Flying Mollusk)

The journey toward founding Flying Mollusk has been very exciting. I’ve always been drawn to the creative aspect of game making and, naturally, that is where most of my experience in the industry was. However, there is an infectious spirit of entrepreneurship in the Interactive Media & Games division of SCA and while I originally never really had any ambition of starting my own studio — I guess some of it must have rubbed off on me while at school.

Your company’s first game, Nevermind, adjusts the difficulty level of the game in response to the degree of anxiety the player exhibits. How can players apply their experience playing this game to their day-to-day lives?

Nevermind is a horror adventure game that places players in very uncomfortable and intense situations. Essentially, it is helping players become more mindful of when they start to experience feelings of fear or stress and, from there, habituate or build a sort of emotional muscle to help stay cool and collected when those feelings start to emerge. Ultimately, we hope this helps players be more prepared to deal with those everyday stresses in real life that we all face — leading to a happier and healthier life all through what we hope is also a fun and engaging video game.

As a game designer, how do you hope your games impact its players?

I’m driven by a desire to explore how games can engage users and benefit them in lasting ways — whether it’s helping people learn a new skill, building awareness and empathy around an issue or cause or simply inspiring players to consider a different perspective on the world — all through the magic of play and adventure. Games have the power to do amazing things; I hope my games can play a small part in doing just that.

What professional accomplishment are you most proud of?

One of the first projects I was involved with as a student in SCA was a game called Trainer. Guided by Marientina Gotsis [who went on to be a major part of Nevermind], a team of students across the USC Games program and I developed a game intended to help inspire children to be more excited about exercise and smart eating choices.

Trainer went on to be honored at the White House as the grand prize winner in the “Apps for Healthy Kids” competition initiated by Michelle Obama. That was a pretty amazing moment because to me it was a major sign that the power of video games was starting to be recognized by major players outside of the game industry. It was both validating and inspiring — hopefully it also serves to inspire others.

As commencement nears, an inventive senior looks ahead to his career in interactive games.

Cinematic arts alum looks at the future of game design