With hundreds of colleagues and friends looking on, Michael Quick was formally installed as USC’s provost and senior vice president for academic affairs on May 6.

Quick, professor of biological sciences in the USC Dornsife College of Letters, Arts and Sciences, had served as interim provost since Dec. 1, 2014. 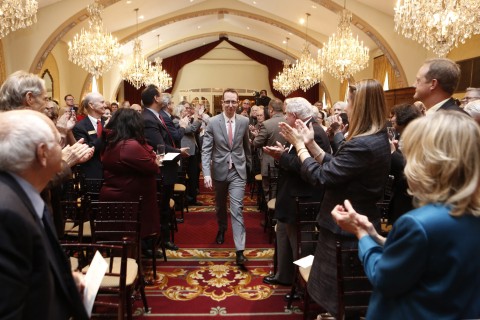 Michael Quick arrives at his installation as USC provost at Town & Gown on May 6. (USC Photo/Steve Cohn)

In introducing Quick, USC President C. L. Max Nikias noted that the USC provost — a position Nikias held before becoming president in 2010 — must be deeply engaged in all areas of the university, from research to classroom instruction, and from the arts to, of course, administration.

“It is very rare to find all of these skills in a single person,” Nikias said, praising Quick as being ideally suited — and named — for the job. “Provost Quick is renowned for being a quick study with a quick wit.”

Quick thanked everyone who had helped and supported him at USC, including trustees, university leadership, faculty, staff and students. He also expressed appreciation to Nikias for being a tutor, a calming influence and a role model. He noted the president’s fund-raising prowess and added, with his typical sense of humor, “I promise to match that with my tremendous fund-spending prowess.”

Then he laid out an ambitious vision for USC, in which the university proves itself as “the great private research university whose singular focus is on serving the global public good.”

He said USC is in the right place at the right time — on the Pacific coast as the age of the Pacific is under way, in one of the world’s great megacities in an era when people globally are migrating to cities. USC also has an incredible faculty and students, he noted, with generous alumni and friends. But with privilege, he said, comes responsibility.

Quick set out these goals:

“I want to work with you to be the one university that does all of these things,” he said. “It is our moral obligation.”

Quick replaces Elizabeth Garrett, who in September 2014 was named Cornell University’s 13th president-elect. She’ll be the first woman to lead Cornell when she takes office in July. Garrett was among the dignitaries at Town & Gown on the University Park Campus for Quick’s installation.

A neuroscientist, Quick was recruited to USC in 2002 from the University of Alabama at Birmingham as associate professor of biological sciences, and was subsequently promoted to professor and vice dean for research at USC Dornsife. He eventually rose to become USC’s executive vice provost and vice president for academic affairs before taking the helm as provost.

The new provost “possesses the rare combination of abilities, experience and knowledge that will best serve our large, complex and very ambitious research university.”

USC Board of Trustees elects international executives as new members

William McMorrow and Heliane Steden bring their business acumen and leadership to their new roles.