Prime Minister Shinzo Abe of Japan could not leave the U.S. without returning to USC.

Abe stopped at the University Park Campus on his way to Los Angeles International Airport on May 2, after a week of historic diplomacy that included a state dinner at the White House and the first address by a Japanese prime minister to a joint session of Congress.

It was Abe’s first time on campus in almost 40 years. He spent three semesters here in 1978 studying English and taking courses in political science, international relations and history.

On this visit, Abe strolled around a campus transformed by recent growth with the leader responsible for much of that growth, USC President C. L. Max Nikias.

We are so proud to count Prime Minister Abe among USC’s most illustrious alumni, as his many accomplishments bring tremendous honor to the university.

In honor of Abe’s visit, Nikias presented the prime minister with a USC letterman’s jacket inscribed to “Shinzo Abe.”

“We are so proud to count Prime Minister Abe among USC’s most illustrious alumni, as his many accomplishments bring tremendous honor to the university,” Nikias said.

“We are also proud of our university’s long and storied relationship with Japan. Japanese students were among USC’s first classes in the 1880s, and we have had a Japanese Student Association on campus since 1910.” 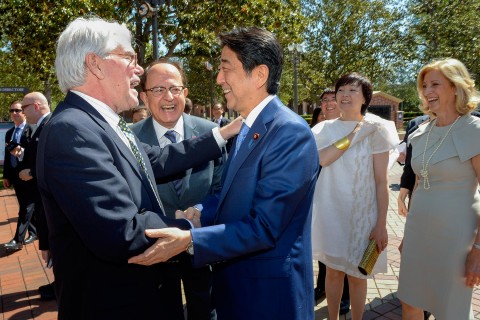 Abe also met with staff and faculty at the USC Shinso Ito Center for Japanese Religions and Culture, and reconnected with old professor Thomas Johnson, who now teaches at the Naval Postgraduate School in Monterey and came to greet his star student.

Abe’s visit held special significance for the Shinso Ito Center, one of only seven institutes for Japan studies at American universities. Founded in 2011 under director Duncan Williams, associate professor of religion in the USC Dornsife College of Letters, Arts and Sciences, the center seeks to promote the study of Japanese religions and culture at USC and in the broader community of Japan studies.

“It’s a good moment to have a prime minister visit a Japan center and encourage an optimistic future for Japan studies. It’s an important historical visit,” Williams said. “USC is one of those schools that has had a long and enduring relationship to Japan.”

Abe is not the only Japanese prime minister to have attended USC. Takeo Miki, who led the country from 1974 to 1976, was a student at USC in the 1930s.

The gift will enhance the center’s mission to promote the study of Japanese religions and culture at USC.

Workshop organized by the USC Shinso Ito Center for Japanese Religions and Culture offers insights to scholars, curators and collectors.

A new major in international relations and the global economy prepares students for such careers.

Building a bridge across the Pacific

As political and economic focus shifts from Europe and the West toward the emerging powers of the East, the 21st century is being dubbed “America’s Pacific Century.”