The recent USC Thornton Jazz Orchestra concert at Ground Zero Performance Café was an experiment of sorts, designed to test the latest technology in hearing protection for musicians, while raising awareness about issues such as noise-induced hearing loss.

Part of the Musician’s Wellness Initiative at the USC Thornton School of Music in collaboration with the Keck School of Medicine of USC, the two-day event in mid-April featured concerts and symposiums in a harmonious blend of entertainment and education, suited for both musicians and music lovers alike.

“What we’re trying to do is increase the consciousness that a long career in music fundamentally relies upon the health of your instrument, which is your body — and particularly your ears,” said Chris Sampson, vice dean of the Contemporary Music Division. 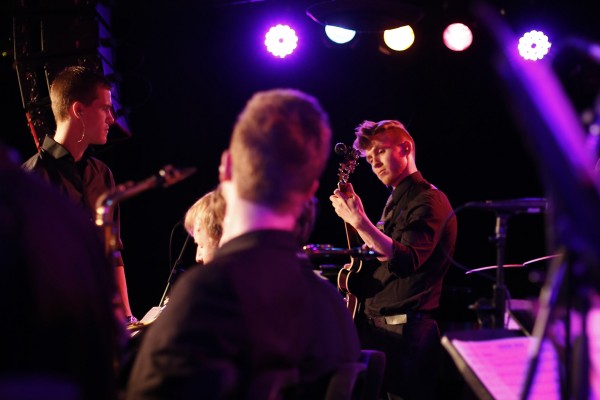 The concert was sponsored by a company that developed electronic earplugs for musicians. (Photo/Danny Wirick)

The concert on April 16 was sponsored by Etymotic Research Inc., which developed the electronic MusicPRO earplugs for musicians with which the entire ensemble performed. The earplugs allow for normal listening when volumes are safe, automatically providing sound reduction when volumes go up to dangerous levels.

“Big bands can be rather loud, especially sitting in the midst of trumpets and brass when they’re really pumping,” said guitarist Frank Potenza, chair of the Department of Studio/Jazz Guitar. “So it’s an interesting experiment and this initiative is hugely important. I’ve known enough people that have damage from being in bands that play loud amplified music and have suffered painful consequences. If that’s avoidable at all, I’m in that line and suggest everyone else get in it, too.”

Considering that the din in an orchestra pit can rival that of a motorcycle and a rock concert is often as loud as an ambulance siren, musicians of all genres are at risk for hearing loss.

“I’ve suffered from tinnitus and have been living with it for 25 years now,” said drummer Peter Erskine, director of Drumset Studies at USC Thornton. “Protecting my hearing now is more important than ever.”

Erskine wants the next generation of musicians to know they don’t have to lose their hearing.

“Advanced technology like this enables you to still be creative and enjoy making music and not play yourself into an early hearing disability,” he said. “Safe hearing, it’s kind of like safe sex.”

Nathan Johnson, a second-year graduate student who plays trumpet with the USC Thornton Jazz Orchestra, gets it. Though he has been reluctant to wear earplugs in the past, he’s also become more aware of the consequences of not doing so.

“In a big band, a lot of times I sit right next to the drummer, so my right ear will start going first,” he said. “I go to a lot of live shows, sometimes loud ones, and I’ll leave and my head hurts, my ears ring.”

Johnson said he wished he’d had the Etymotic earplugs for a recent gig with The Temptations.

Johnson felt like this was the right time and place to raise awareness.

“Most of us want to be performers. We want a long career,” he said. “We should be exposed to this research while we’re here. If we don’t learn about it now, where will we learn about it?” 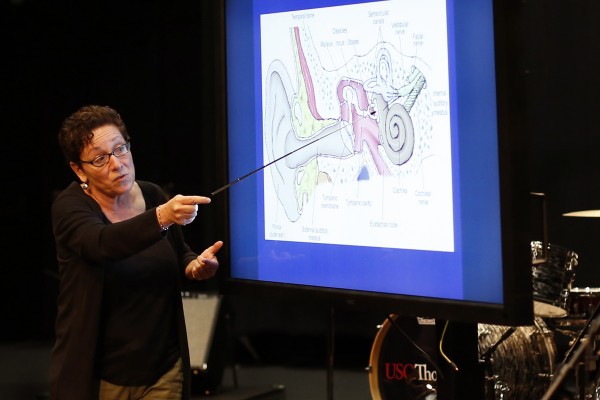 Hearing health wasn’t the only focus of the Musician’s Wellness Initiative — Cynthia Munzer of the Vocal Arts and Opera department hosted an educational performance event to coincide with World Voice Day.

Bringing together singers and vocal health experts, the event examined the extraordinary physiological forces that shape the human voice — and the challenges of keeping those elements in peak physical condition.

“The voice is an extension of the body, and we have to promote wellness of the body,” Munzer said. “It’s important to see the lungs in action and to see the vocal chords working together.”

In between performances by the CreSCendo Vocal Jazz Ensemble, the Apollo Men’s Chorus and excerpts from two operas, audiences enjoyed lectures by Keck School of Medicine of USC otolaryngologists and lung specialists, including a startling video of an opera singer’s vocal chords in action — from the inside.

For both musicians and health professionals, the Musician’s Wellness Initiative presented opportunities for education and collaboration. As Munzer noted, however, it was also an opportunity to celebrate musical artistry and all of the work that comes with it.

“USC and Thornton regard our voices so highly,” Munzer said, “so why not have a celebration of performance?”

Trojans help the singer-songwriter with the release of her first new album in 10 years.

Enjoy the music, but guard your ears