Growing up in Incheon, South Korea, the family of Soonja Choe PhD ’85 was very poor. Her mother never went to school and her father had a limited grade-school education. Choe was just 12 years old when he died, leaving her mother to care for five children.

It was her family’s misfortune that inspired Choe to pursue a singular goal.

“To overcome our poverty, I knew I had to get an education,” she said. “That was the only way I could help my family out of it.”

Decades later, crowning a 28-year career of teaching and research at Inha University, Choe took office as its 14th president on Feb. 25. She is the first woman to hold the position in the university’s 61-year history.

The secret of success

The secret of her success, she said, is simple: a lifetime of diligence and hard work.

Choe entered Inha University as an undergraduate student in 1971. Though she dreamed of studying journalism or philosophy, at that time chemistry and chemical engineering were the booming majors as Korea developed a new industry in petrochemicals. Building on her high school aptitude in math, chemistry and physics, she took the practical route and enrolled in the chemical engineering program.

She was one of two female students among 700 in the program, and six months later, the other woman left.

Undaunted, Choe completed her bachelor’s degree and started looking for an industry job that would allow her to support her family. However, at that time in Korea, there were virtually no such opportunities for a woman. So she came up with a Plan B — teaching chemistry to secondary school students for four years. She contributed her entire salary to her family.

Eventually wanting to do something for herself, she decided to pursue a master’s degree abroad. With $200 in her pocket, Choe came to Los Angeles and gained admission to the USC Viterbi School of Engineering to study chemical engineering. With limited English, she supported herself by working on the weekends at a supermarket. She used her earnings for tuition and sent the rest back home to Korea.

“I avoided Korean students so I could learn English better,” she said. “Whenever I was in line at the store or the bank, I would listen to people around me speaking and try and understand what they were saying. I came home so tired at night!” 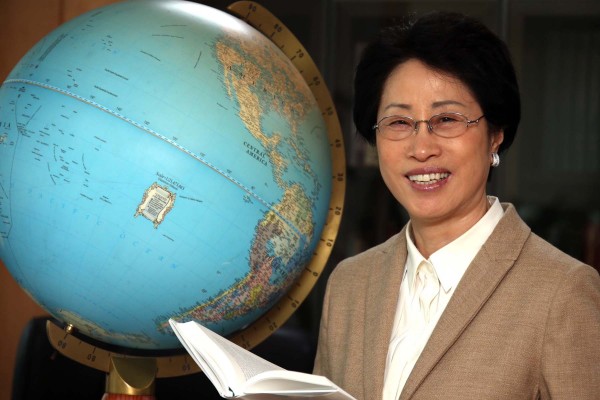 In 1983, Choe received a full fellowship from the Department of Chemistry at the USC Dornsife College of Letters, Arts and Sciences, where she decided to pursue a Ph.D. in chemistry. Her adviser was John Aklonis, now-retired professor of chemistry and former executive director of the USC Loker Hydrocarbon Research Institute. She worked as both a research and a teaching assistant in general chemistry.

“John Aklonis was very special,” Choe recalled. “He’s such a nice person, and he was an excellent lecturer and always tried to help and encourage his students.”

The two remain friends today. Though unable to attend her presidential inauguration ceremony, Aklonis created a video address to be played that day in which he emphasized her resilience and strength, her diligence and ethics, and her efforts to combat gender discrimination.

Soonja Choe is a remarkable woman.

“Soonja Choe is a remarkable woman,” Aklonis said. “She excelled as a USC student and postdoctoral fellow, made significant contributions to education and polymer science as a faculty member at Inha University, and has led great advances for women in sciences and engineering in Korea.

“I can’t think of anyone who would have been a better choice for the 14th president of Inha,” he said.

Choe completed her Ph.D. in 1985 and since 1987, she has taught and conducted extensive research in Inha University’s Department of Chemical Engineering.

In Korean society, people still think women are not interested in science and engineering. I know women can do as much as men do.

“I love teaching students, especially female engineering students,” she said. “I teach STEM subjects — in Korea it’s called STEAM: science, technology, engineering, arts and math. I have mentored many female students and talked to high school students about opportunities in Inha’s College of Engineering. In Korean society, people still think women are not interested in science and engineering. But I don’t think so. I know women can do as much as men do.”

So what is her approach to teaching young female scientists?

“I believe the human spirit is developed by education and training. I want my female students to be both strong in spirit and strong mentally. So I give them opportunities to do things by themselves. The results are wonderful, much more than I expect. That’s the best part — every time they bring a new perspective and I learn something from them.

“I’ve realized that sometimes education is letting students discover on their own,” she said. “This gives them pride and builds their confidence.”

In 2002, Choe received the Order of Science and Technology Merit from the South Korean government for her academic achievements and contribution to the development of chemical engineering. She served as president of the Korea Federation of Women’s Science and Technology Associations, and in 2006 she was the first woman to obtain full membership in the National Academy of Engineering of Korea.

Choe has served as chair of the government’s Committee for Gender Equality in Faculty Appointment of Universities/Colleges since 2013, and she is also director of the WISET (Women in Science, Engineering and Technology) Regional Agency of Incheon. She has 33 patents registered with the Korean Intellectual Property Office.

In her new role at Inha University, Choe wants to emphasize high-quality education while encouraging students to know themselves and their passions.

“A crucial role for a university is fostering global frontiers. As president, I will do my best to enable students to realize their personal dreams — and become leaders who contribute to society and the economy — through learning in an outstanding educational environment.”

While proud of her objective success, Choe recognizes that there are other less tangible means of achievement in life that are equally important. The job market in Korea is very competitive, she said, with only 50 percent of college students finding work following graduation. They are anxious to get jobs and work hard to do so, but many don’t have a passion for their work.

“I’d like our students to understand why they are doing what they’re doing and what their purpose is as a human being. I want them to pursue their dreams and see a bigger world — getting a job is just one aspect of their lives.

“When I started out, I wanted to have a job,” she said, “but I am also committed to living a life of justice, ethics, freedom and connection with others.”

USC’s WiSE program is an investment in the advancement of scientific fields.

The message to the dozens of school-aged girls was simple — with hard work and diligence, they can achieve meaningful and successful careers in science, technology, engineering and math.