Albert “Skip” Rizzo, director of medical virtual reality at the USC Institute for Creative Technologies, received the Pioneer in Medicine Award from the Society for Brain Mapping and Therapeutics (SBMT) and Brain Mapping Foundation.

The award, presented at the society’s annual meeting last month, recognized Rizzo for his role in the field of virtual reality medicine and his impact on treatment of patients with a range of clinical health conditions, including stroke, brain injury, autism and post-traumatic stress disorder.

Rizzo, who is also a research professor at the USC Davis School of Gerontology and the Department of Psychiatry and Behavioral Sciences of the Keck School of Medicine of USC, conducts research on the design, development and evaluation of virtual reality systems for clinical assessment, treatment, rehabilitation and resilience.

“Brain mapping … is the study of the brain from imaging all the way to the molecular, cellular and behavioral levels,” said SBMT founder Babak Kateb. “Professor Rizzo has utilized brain imaging, metadata/patient clinical records, VR simulation technology and has created therapeutic systems for patients with neurological disorders. This is truly pioneering brain mapping and therapeutic techniques in action and at its best.”

Rizzo began exploring the use of virtual reality technologies for neurological conditions and disorders when he worked as a rehabilitation therapist in the early 1990s.

“I was working with young men who had suffered traumatic brain injuries,” Rizzo said. “As a result of their injuries, they had difficulty staying motivated to do intensive, repetitive, cognitive rehabilitation exercises, but they did not want to put their video games down.

I realized then that we could harness emerging virtual reality and game-based systems to improve engagement with therapy and diagnostic tools.

“I realized then that we could harness emerging virtual reality and game-based systems to improve engagement with therapy and diagnostic tools. That is where I have focused all my research efforts to date, and it is an honor to be recognized by the SBMT and the Brain Mapping Foundation.”

Rizzo is known for his work developing a virtual reality exposure therapy for treating post-traumatic stress disorder that is currently being used at more than 50 sites, including Veterans Affairs hospitals, military bases and university centers. The Bravemind system has been shown to produce a meaningful reduction in PTSD symptoms in a number of initial trials; additional randomized controlled studies are ongoing. 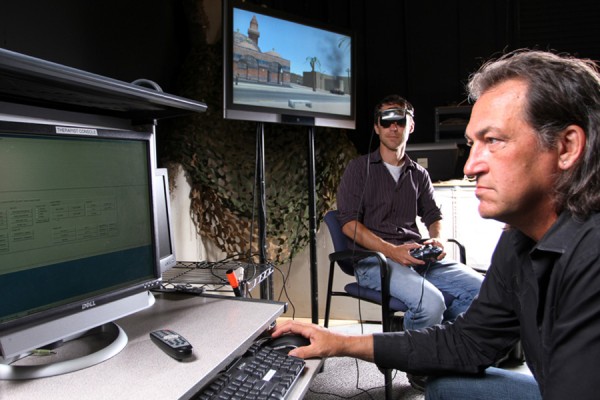 Other research efforts include exploring the use of virtual human interviewers and artificial intelligence technologies to identify indicators of psychological distress such as depression, anxiety and PTSD; using story-based virtual reality scenarios to build coping skills and resilience; and using virtual human role players to help students on the autism spectrum to prepare for job interviews.

“Skip Rizzo has been one of the most influential leaders in the application of virtual reality to neuropsychiatric disorders, bringing together researchers from diverse backgrounds and nations through the sheer force of his personality and vision, to provide superior methods of treatment to countless individuals suffering from mood and anxiety disorders, posttraumatic stress and phobias,” said Michael Roy, a professor of medicine at Uniformed Services University and an SMBT chairperson.

The Society for Brain Mapping and Therapeutics is a nonprofit for basic and clinical scientists interested in brain mapping, engineering, stem cells, nanotechnology, imaging and medical devices to improve the diagnosis, treatment and rehab of patients with neurological disorders. The Brain Mapping Foundation provides funding to members of the society.

This year’s conference — described as the largest convention ever organized on the topic of brain mapping — featured close to 1,000 attendees and 550 speakers. Rizzo gave one of 10 keynote talks.

“The committee was truly impressed with the pioneering work done by Professor Rizzo,” said Vicky Yamamoto, co-chair of the award committee of the Brain Mapping Foundation, executive board member of the SBMT and a cancer scientist at the Department of Head & Neck Surgery at Keck School of Medicine. “Virtual reality is the way of the future for medical device and drug development and testing as well as brain mapping and therapeutics. Dr. Rizzo is truly ahead of his peers in the field.”

Three alums offer a studio with a reputation for creating some of the most transcendent virtual experiences in their emerging market.