USC Stem Cell researcher Justin Ichida has marshaled the expertise of pharmaceutical company Sanofi and startup DRVision Technologies, along with $1.5 million in federal funding, to find new drugs in the fight against amyotrophic lateral sclerosis, or Lou Gehrig’s disease.

ALS patients suffer from the death of the cells that transmit signals from the brain to the muscles, called motor neurons, leading to progressive paralysis and usually resulting in fatal respiratory failure within three to five years of diagnosis.

The three-year grant comes from the Department of Defense. Each year, the DoD funds two ALS Therapeutic Development Awards because military veterans are more likely than civilians to suffer from this fatal disease for reasons that are not yet understood.

“The awards are intended to either identify a new drug target or candidate for ALS, or to take an existing one further into the clinic,” said Ichida, an assistant professor in the Department of Stem Cell Biology and Regenerative Medicine and director of the Choi Family Therapeutic Screening Facility at the Keck School of Medicine of USC. 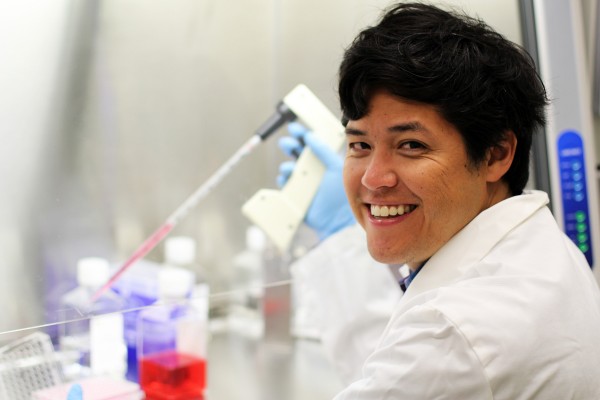 Ichida has developed a way to pre-screen drug-like compounds on cells from patients with the most common form of ALS. (USC Photo/Cristy Lytal)

Working in his lab, Ichida has developed a way to pre-screen drug-like compounds on cells from patients with the most common form of ALS. To accomplish this, he directly reprograms patients’ skin cells into motor neurons, which demonstrate the disease’s signature degeneration.

He then puts these reprogrammed motor neurons into a robotic screening machine, which exposes them to drug-like compounds and captures microscopic movies of the results. In his pilot screening of 800 compounds, Ichida found four that kept these motor neurons alive in the Petri dishes — and eventually could do the same in patients.

With the new grant and industry partners, Ichida will scale up his efforts starting in September. He’ll screen 2,000 U.S. Food and Drug Administration-approved drugs in his laboratory. Sanofi will screen an additional 40,000 drug-like compounds — contributing much of the work in kind, while receiving only a small amount of grant funding.

DRVision Technologies will design software to analyze the resulting microscopic images for signs of improved motor neuron survival — a task that postdocs could handle for 800 compounds, but not for 42,000.

“In the preliminary data, Justin’s lab successfully used our software to track these motor neurons,” said Sam Alworth, director of marketing and sales for DRVision. “So my understanding is that it’ll be an issue of scaling that up. This collaboration with USC falls into the category of applied research and development where we use and expand our tools in collaboration with a leading scientist to solve a particular problem.”

If the funded study reveals viable “hits,” expert chemists at Sanofi may develop these compounds into safe, effective drugs that are stable in the blood and possess other key prerequisites to testing in a human clinical trial.

Sanofi’s leadership originally became aware of Ichida’s research thanks to an introduction by USC Stem Cell Program Director Qing Liu, who is managing the project.

“At least for us, the opportunity to work with USC has been fabulous,” said Paul August, who serves as director and discovery biology department head at the Sanofi Tucson Innovation Center. “The quality of science that we see advancing at USC has been fantastic. Justin’s such an easygoing faculty member; he’s open to new ideas and he’s very innovative in terms of thinking about other ways to look at the same problem. Working with Justin has been fantastic, and it just lends itself to additional interactions in the future with USC.”

Ichida and his industry partners aren’t screening compounds at random. They know that patients with the most common form of ALS and frontotemporal dementia have a specific mutation in which their DNA contains hundreds of extraneous repetitions of a gene called C9ORF72. This mutation impairs the function of their motor neurons.

“There’s basically almost 100 percent certainty that the gene expansion happened once, and everybody’s a descendant of that person,” Ichida said. “This happened several hundred years ago in Scandinavia. So in Northern Europe, 50 percent of familial ALS or more is from this one mutation, and in North America, it’s still pretty common.”

The importance is that it’s going to be one of the first examples of taking a patient-specific disease model from stem cells and using it to discover drugs at a pharmaceutical scale.

In light of this mutation, the team chose to screen compounds for their potential effects on motor neuron functions related to the C9ORF72 gene.

Ichida believes that partnerships between academia, industry and government can accelerate the development of new treatments for patients with ALS and other fatal diseases.

“The importance is that it’s going to be one of the first examples of taking a patient-specific disease model from stem cells and using it to discover drugs at a pharmaceutical scale,” he said. “And specifically for ALS, the fact that Sanofi’s involved means that if they do find something, they’re going to want to develop it. So I think it has a really high chance of getting to patients, if we find something interesting.”

Teams will test drug candidates with the potential to help patients with cancer and bone fractures.