One in three Americans has high blood pressure, a long-term constriction of arteries that can lead to coronary heart disease, heart failure and stroke.

Using a sophisticated X-ray analysis, a U.S.-German team of scientists revealed the molecular structure of the angiotensin receptor AT1R, an important regulator for blood pressure in the human body.

The work could fast-track the development of new medications with fewer side effects, according to Vadim Cherezov, lead researcher and professor at the USC Dornsife College of Letters, Arts and Sciences. 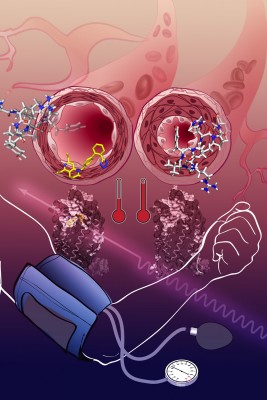 Illustration of the effects of angiotensin
(Photo/courtesy of Katya Kadyshevskaya)

Angiotensin receptor AT1R, when activated by the hormone angiotensin, triggers two major signaling pathways inside of cells. One of them, mediated by G proteins (a family of proteins that act as switches and transmit signals through cell walls), causes the constriction of blood vessels, leading to an increase in blood pressure. Another pathway, mediated by arrestin, confers a number of beneficial effects.

Doctors regularly prescribe drugs, known as angiotensin receptor blockers, that turn off both pathways, which prevents the constriction but also has side effects, such as dizziness, headache, drowsiness and elevated levels of potassium in the blood.

“It’s like using a two-by-four to kill a fly. Yes, it works, but perhaps a more refined approach could achieve the positive results without many side effects by only blocking the G protein pathway while keeping the arresting pathway active,” Cherezov said. “To do so, you need to understand exactly how and where drug-like molecules bind to the receptor and what conformational changes they produce.”

The researchers created crystals of the receptor in complex with an angiotensin receptor blocker. Then they used the world’s most powerful X-ray laser to zap the crystals with flashes of energy strong enough to produce diffraction patterns.

By interpreting those patterns, the scientists were able to piece together the receptor’s structure with a resolution of 0.29 nanometers — an atomic scale, showing precisely where the drug molecule is bound.

“Despite its medical relevance, the structure of this receptor was unknown up to now,” said study co-author Cornelius Gati of the Center for Free-Electron Laser Science at Deutsches Elektronen-Synchrotron in Germany.

“The data show the exact structure of the binding pocket and the interaction with blood pressure drugs binding there. This provides new insights into the mode of action and facilitates the development of new drugs,” he said.

The findings appear in the journal Cell. The scientists said they hope that the exact knowledge of the molecular receptor structure can help to design tailor-made blood pressure drugs with fewer side effects.

“Our work represents a first step in this direction,” said Cherezov, who next plans to continue study on this receptor and another, closely related receptor.

The research was funded in part by the National Institutes of Health.

Zeroing in on a silent killer