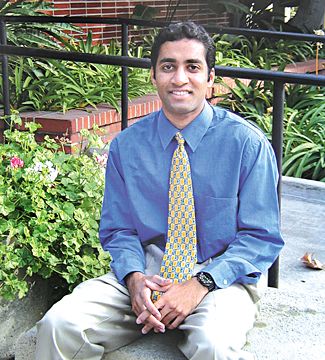 Jacob Chacko’s “ability to focus on the task at hand has a lot to do with his success,” said Albert Herrera, a professor of biological sciences and a mentor to Chacko, above. “He obviously has very good time-management skills — plus he’s a very congenial and likable person.”

Success not shared is failure, Jacob Chacko’s mother frequently told him as he was growing up.

The message apparently stuck. In his nearly four years at USC, Chacko has generously shared his wide-ranging intellect, leadership and athletic skills on campus – and his energy as a volunteer working with public school students off campus.

His success at these varied tasks has been rewarded with a Marshall Scholarship that will pay his expenses for two years of study at Oxford, starting next fall. A senior who will graduate in May with a double major in biology and gerontology, Chacko is one of only 40 undergraduates nationwide chosen for the scholarships.

“With his combination of scholarly achievements, leadership and extracurricular activities, Jacob has personified dedication to his own development, the university and the surrounding community,” wrote Michael L. Jackson, vice president for student affairs, in a letter nominating Chacko for the award.

THE HONOR IS “mind numbing,” said Chacko, who has been interviewed as a result by newspapers from India to his South Bay hometown. Last year, after a summer spent studying literature and philosophy at Cam bridge University, “I realized that I’d love to go to England and study again,” he said. At Oxford, he’ll study politics, philosophy and economics – which make up one degree, known as PPE.

When he returns to this country, he’ll enter medical school at USC or UCLA. A Trustee Scholar who was accepted into USC’s baccalaureate/M.D. program, he is guaranteed admission to USC’s Keck School of Medicine.

“My first love is medicine. I want to become a physician and practice in a clinical setting – but eventually, I want to get into policy-making,” said Chacko, who has a minor in health policy and management. “I have so many interests right now.”

One of them is soccer. Chacko was a starting forward and midfielder on the USC men’s soccer team until he tore a ligament in his right knee during a game last year. He is still rehabilitating the knee but dreams of playing varsity soccer at Oxford.

“Whether he’s playing soccer, or conducting research or serving as a resident adviser, he’s very focused,” said Albert Herrera, a professor of biological sciences who Chacko said has had a “big influence” on his academic career.

Under Herrera’s direction, Chacko is finishing a research project on neuromuscular junction remodeling in frogs – applying tiny amounts of snake venom (“It scared me to use it at first”) to block the activity of certain brain synapses and see how use can change the brain’s structure. The project won a 1999 Dean of Research Award for Excellence in Undergraduate Re search.

“His ability to focus on the task at hand has a lot to do with his success,” Herrera said. “He obviously has very good time-management skills – plus he’s a very congenial and likable person.”

Those qualities have led Chacko, who has a 3.97 grade-point average, to earn dozens of awards for leadership and scholarship. A resident adviser in his dorm since his sophomore year, he was selected last fall as one of 11 campus-wide “senior RAs.”

BUT HE IS MOST PROUD of two awards sponsored by the student honor group Order of the Torch. In 1997, he won the order’s Freshmen Recognition Award; then, in November, he was named “Mr. USC.” (Order of the Torch picks a male and a female undergraduate – “Ms. USC” – each year to be student ambassadors for USC at academic functions, fund-raisers and student events.)

“The university has given me so much over the last few years, and now I get to talk about USC to others,” he said.

AS A YOUNGSTER, Chacko had solid role models for hard work and achievement. His parents, who were born in the Indian state of Kerala, emigrated to this country in the early ‘70s. His mother, Leela, is an emergency room physician; his father, K.M., is a mechanical engineer and CEO of T&K Mechanical of Torrance. They live in Rancho Palos Verdes.

Taking his mother’s aphorism to heart, Chacko has been an active volunteer with the Family of Five Schools since coming to USC. As a freshman, he became a tutor for USC’s Joint Educational Project and Neighborhood Academic Initiative. Last year, he helped organize a leadership academy for Foshay Learning Center students, and he is now organizing a free, weekend soccer camp for local elementary students that will begin in the spring.

“I’ve always enjoyed mentoring others,” said Chacko, who helped coach an under-14 boys soccer club team in his home community. But volunteering with students who live near campus – most of them from struggling or working-class families – has been especially meaningful, he said.

“The students I work with have overcome a lot more obstacles than I have,” he said. “The students in the leadership academy, for example, have had such terrific accomplishments – it’s very humbling.”