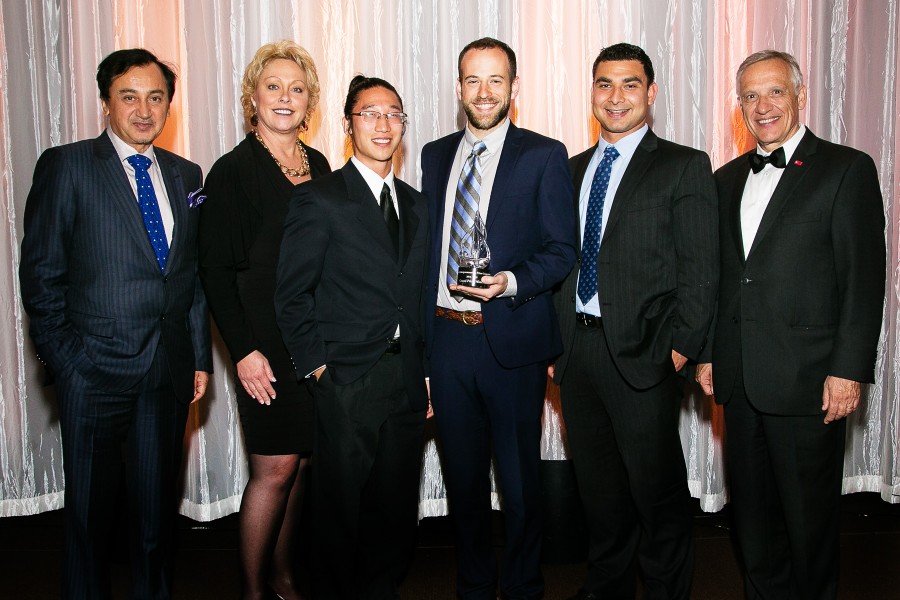 And the winner is …

At the 37th annual Viterbi Awards, the engineering school’s growing strength in innovation was showcased with the announcement of the winners of the Maseeh Entrepreneurship Prize Competition.

“We think of this event as the Academy Awards for USC Viterbi startups,” Dean Yannis C. Yortsos said.

Suspense mounted at the April 16 soiree at the Beverly Wilshire Hotel as about 500 members of the Trojan Family waited to see which team would take home the grand prize, along with the $50,000 that went with it.

Fairborz Maseeh, the namesake whose $1 million endowment created the competition, read the names of the three finalists in descending order.

RadioSon Corp. took home the bronze, which came with $10,000 in free legal services. The team has developed a forward-looking, intravascular ultrasound-imaging catheter that makes it faster, safer and easier for vascular surgeons to navigate through blood vessels to treat peripheral arterial disease.

Second place and $15,000 in legal services went to AesculaTech. The startup has developed AesculaGel, a sustained drug-delivery platform with a thermo responsive hydrogel, primarily for the treatment of glaucoma. By delivering medication to the ocular surface continuously for 90 days, AesculaGel ensures better patient compliance than eye drops and other existing treatments.

The grand prize, plus $20,000 in legal services, went to Brain Injury Research Strategies Inc. The startup is developing a portable hardware and software platform capable of delivering a five-minute concussion assessment test that uses eye tracking to measure neurocognitive health. In the United States, athletes suffer an estimated 300,000 concussions every year. Many return to play too quickly because of misdiagnosis, risking further neurocognitive damage.

“Just being here is so exciting,” said the company’s Brian Robinson, a biomedical engineering Ph.D. student at the USC Viterbi School of Engineering, moments after winning. “It feels amazing.”

Other stars shined brightly at the Viterbi Awards.

Liveris is chairman and chief executive of The Dow Chemical Co., a global leader in specialty chemicals, advanced materials, agrosciences and plastics. Last year, the company posted $58 billion in sales.

A believer in the importance of advanced manufacturing to preserving America’s economic primacy, Liveris wrote the acclaimed Make It in America: The Case for Reinventing the Economy. He sits on the board of directors of IBM, serves as vice chair of the Business Roundtable and is a member of the U.S. President’s Export Council.

Al Jaber, a USC Viterbi alumnus with a bachelor’s in chemical engineering, received the Global Leadership in Engineering Award. Recently appointed as minister of state of UAE, Al Jaber represents and supports the UAE government and its interests in domestic and international affairs.

He has led the UAE’s efforts to diversify its economy away from hydrocarbons and toward a more innovation and knowledge-based economy.

Under his direction, Masdar City has begun taking shape. This burgeoning low-carbon, low-waste urban development will be powered by renewable energy. Over time, Al Jaber envisions Masdar City becoming a global clean-technology cluster, where tech developers, academics, entrepreneurs and companies would come together to develop renewable energy and green technology.

Al Jaber was recognized as a “Champion of the Earth,” the United Nations’ flagship award that honors visionaries and leaders in the fields of policy, science and entrepreneurship. He was also appointed an honorary Commander of the Most Excellent Order of the British Empire by Her Majesty Queen Elizabeth II. Al Jaber said USC Viterbi would “always hold a special place in my heart.”

A successful venture capitalist, in 2005 he co-founded Northern Light Venture Capital, a leading China-focused venture capital targeting early growth-stage opportunities. Northern Light has about $1 billion in committed capital and has attracted leading institutional investors from around the world.

Previously, Deng co-founded NetScreen Technologies, which subsequently went public on NASDAQ and was later acquired by Juniper Networks in 2004 for $4.2 billion. Ernst & Young named him Entrepreneur of the Year in 2002.

Looking at Yortsos, he said, “Without you and all these other USC professor(s) giving me a hard time and all those sleepless nights … I wouldn’t be here tonight.”

A catalyst for entrepreneurs

USC Viterbi’s growing entrepreneurial prowess took center stage for much of the night at the ceremony. Yortsos told the audience how USC Viterbi hopes to become “a catalyst for entrepreneurship and innovations that will fuel the economic growth of Los Angeles, the United States and the world.”

Toward that end, the dean said, USC Viterbi launched the Viterbi Startup Garage, Southern California’s only venture accelerator for engineering student-led companies. As a reflection of the quality of businesses coming out of the engineering school, five startups from the inaugural Garage have raised more than $6.6 million in follow-on capital.

And then there’s the Maseeh Entrepreneurship Prize Competition.

Founded in 2010, the business plan competition provides budding businesses with mentoring from investors and industry experts. This year’s competition had a record 50 teams competing for 16 spots. For the first time, each team received a $2,500 grant from the National Science Foundation to canvass potential customers around the country to learn their concerns and how they might address them.

The competition has given rise to several exciting companies.

I humbly predict that it will be engineers that will solve many of the grand challenges of the world.

In January, the Orange County Register featured 2011 winner Abtum in a cover story about startups moving into a new business incubator in Irvine. The company makes a tunable radio frequency duplexer for mobile handsets that offers significant performance and cost improvements for long-term evolution-enabled products.

“As an engineer and entrepreneur myself, I humbly predict that it will be engineers that will solve many of the grand challenges of the world,” said competition director Peter Beerel, an associate professor. “And at USC, we want Viterbi engineers to lead the way.”

Brace yourself for a better way to straighten teeth

ComfortCorrect is poised to alter the orthodontics market.