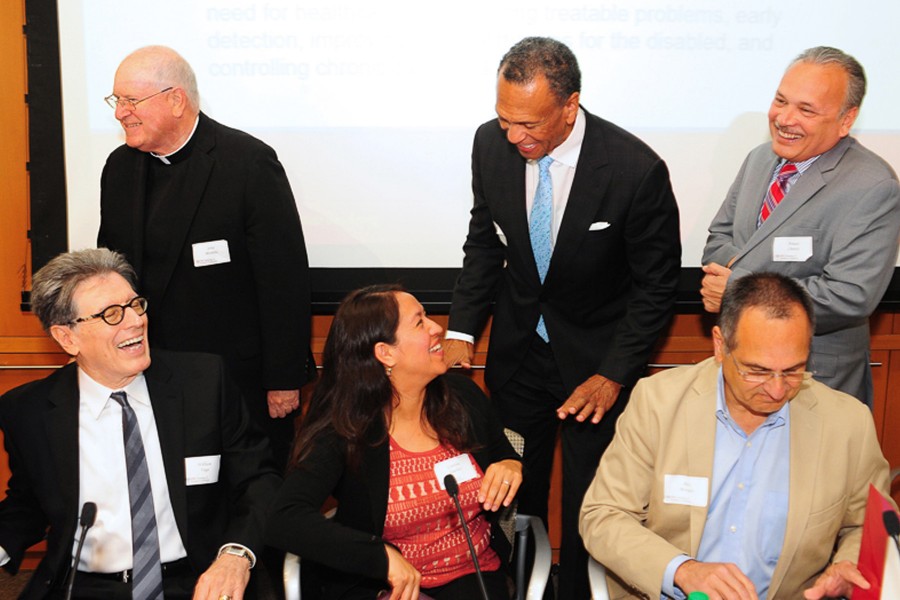 The release of the 2015 USC State of the Neighborhood Report prompted more than 100 community leaders, neighborhood groups, and USC faculty and staff to gather on the University Park and Health Sciences campuses for an in-depth review of its findings.

The report, a baseline used to measure impacts and outcomes going forward, focused on the current state of the communities surrounding UPC and HSC in five key areas: economic stability, education, health and health care, neighborhood and built environment and social capital. It examined such disparate measures as access to child care and the number of banks in the area, as well as a host of other community issues that will take the entire community to solve.

“We are all trying to get it right, said Provost Professor William Vega, executive director of the USC Edward R. Roybal Institute on Aging at the USC School of Social Work, who was a senior adviser on the report. “This is all part of a larger movement, a revolution on how health is related to the community.”

Improving the lives of others

The report is the product of an 18-month effort led by Hortensia Amaro, the lead author and associate vice provost for community research. Amaro enlisted the nonprofit civil rights organization Advancement Project and convened a community advisory board and faculty task force to examine the state of USC’s neighborhoods.

“We have incredible privilege at this university. We have faculty that are second to none. We have students, people, staff, alumni, parents who are passionate about this university. We have all the assets to do what we need to do. And it is our responsibility to act on all of that privilege,” USC Provost Michael Quick said. “I look forward to working with all of you and all of our partners across the community to make a difference.”

While the core mission of USC is to educate students and perform research, improving the lives of people, particularly the people in nearby communities, is equally important, said Senior Vice President of University Relations Thomas Sayles.

This is a truly engaged university. This report will help us think about our priorities now and in the future.

“This is a truly engaged university,” Sayles said. “This report will help us think about our priorities now and in the future.”

The report noted that truancy is down and graduation rates are up in the study areas surrounding each campus. But reading by the third grade is lower than average in Los Angeles, the report showed, and child abuse allegations are higher.

“While a lot of work needs to be done, we’ve made a lot of progress,” Sayles said. “It is clear USC cannot do this alone, but it is also clear USC is doing and will continue to do its part.”

The report emphasized that place matters, said Provost Professor Manuel Pastor, director of the Program for Environmental and Regional Equity. Pastor is also co-director of the Center for the Study of Immigrant Integration.

“We need to resist looking for a silver bullet and take a holistic approach,” said Pastor, a senior adviser on the report.

Amaro said the report will guide efforts to create positive change with recommendations specific to each of the communities surrounding their respective campus.

The report found that the area around HSC, for example, is a bank desert. There are .5 banks per 10,000 people in the area, compared to 1.9 in the city of Los Angeles.

In the UPC study area, where the USC School for Early Childhood Education administers Head Start programs for more than 500 families in South Los Angeles, more than 21 percent of children had access to a licensed child care provider, 1 percent higher than the city average. High-quality child care is not only connected to a child’s development, but it also allows parents to be involved with the child’s school, have stable employment and be engaged on a civic level, Amaro noted.

Yet even when more services were available, residents often were not able to identify the resources, said Chris Ringewald, a research manager for the Advancement Project. He called for more outreach from city offices, nonprofit groups and USC to the populations they’re trying to serve.

“Why does USC focus on what’s going on in the neighborhood? Because they want to partner” with us, said Morales, who led a $22 million campaign to build Magnolia Place Family Center in South Los Angeles. “This is a statement from USC. This report is a framework for a strategy” to change the community, he said.

Women lead a call to action as part of a Health Sciences Campus partnership funded by the Good Neighbors Campaign.

Two workshops show teens how to bring about change and plan for college.

State of the Neighborhood Report offers proposals for surrounding communities