There was no honeymoon period for National Basketball Association Commissioner Adam Silver.

In his first year on the job, he banned a longtime owner, oversaw the sale of two franchises in record-making pacts and signed a series of huge TV deals.

Silver spoke on April 8 with David Carter, executive director of the Sports Business Institute, based at the USC Marshall School of Business, to discuss the present and, more importantly, the future of pro basketball at the Commissoners’ Series.

He’s taking the league to the next level.

“He’s taking the league to the next level,” Carter said, “and he’s making it look almost easy.”

Silver told Carter why his transition into the commissioner’s role might appear so effortless — he had, in effect, been training for the job for 23 years, he said.

After some years as a litigator, Silver left the legal profession in 1992 to join the NBA as then Commissioner David Stern’s right-hand man.

“He gets all the credit for any smooth transition,” Silver said of Stern. “In all my years working for him, he gave me access to everything. It is very rare in this day and age for someone to get this kind of opportunity.”

The SBI ranked Silver atop its list of the 50 most influential people in sports business in 2014. Sports Illustrated named him executive of the year. He was also recently named one of the 100 Most Influential People by Time magazine.

Digital media has been good for sports, he said. 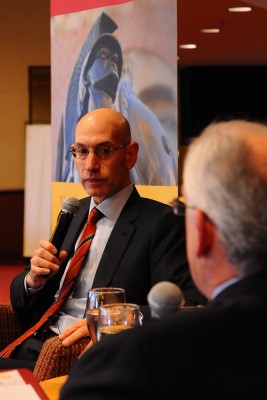 Mobile platforms mean live sports can be streamed anywhere in the world, he said.   A case in point is Oklahoma City Thunder forward Kevin Durant.

“He has a global fan base,” said Silver, adding that some of the most league’s ravenous fans are now in India and China. “With digital media, basketball is available to millions of fans,” he said. “It’s truly a global league.”

Broadcasters now buy rights to the league across all platforms, which increases the reach and value of premium sports content, he said.

That helps explain the recent headline-making $24 billion media deals the NBA reached with Turner Broadcasting and ESPN, which represents a new reality for major league sports as global entertainment.

“What we’re seeing is an enormous increase in consumption,” he said. “And mobile technology is what makes that possible. All these new platforms are only going to increase the value of our rights.”

The longtime head coach will be honored on April 26 at USC’s Galen Center.

She’s the third USC women’s player to be so honored, joining Cheryl Miller and Cynthia Cooper.

The Trojan Olympian will be formally inducted next summer in Tennessee.