True or false? In 1915, the Ottoman Empire perpetrated a genocide against the Armenian people that left more than 1 million dead and hundreds of thousands in exile.

If you answered “true,” you are in agreement with world opinion and leading historians. But if you’re a Turkish nationalist, you probably answered “false” — either because you don’t know any better or because you feel compelled to repeat official state policy.

Armenians and Turkey: A night of films

USC’s Institute of Armenian Studies will host a night of award-winning documentaries and short films exploring the complex ties between Armenians and Turks. Films are subtitled in English.

That, in a nutshell, is why a hundred years on, the Armenian Genocide remains a hot-button issue.

Today only 9 percent of Turks say the wholesale massacres, mass deportations and death marches ever happened. Many have no idea ethnic Armenians ever lived in Turkey.

April 24 marks the centennial of the Armenian Genocide. On that day in 1915, authorities rounded up and sent to their deaths 250 Armenian intellectuals and community leaders in Constantinople — the first of many such arrests.

Salpi Ghazarian, director of the USC Institute of Armenian Studies at the USC Dornsife College of Letters, Arts and Sciences, shed light on this dark, still-unresolved chapter.

After 100 years, world opinion is unequivocal: The Armenian Genocide was real. Does Turkish acknowledgement really matter?

It matters because it would mean the government of Turkey recognizes that the actions of the Ottoman authorities were criminal. That’s an important recognition of serious human rights abuses and crimes against humanity. Acknowledgement is hugely important for very pragmatic, on-the-ground reasons, too. For centuries, the Ottoman and Turkish governments have solved every major domestic political problem with violence. That’s unacceptable and a source of deep concern for Armenians living next door, in the Republic of Armenia. Beyond that, the Turkish leadership can’t keep calling my grandmother a liar.

What do you mean? 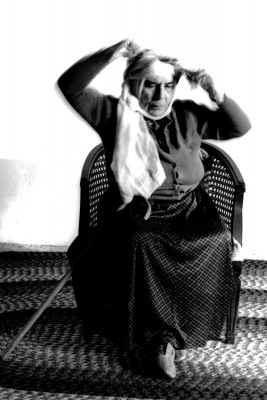 My mother’s mother was kidnapped on the deportation route. All she remembered was her name because her mother screamed it as they carried her away. She thinks she was about 5 when she was taken. Some Bedouin tribes, Arab tribes and then Turkish tribes took her in. During her early teens, she was sold into marriage to a much older Armenian man. She ran away from him with her young daughter, my mother, and they took shelter in refugee camps and orphanages in Syria. Years later, I taught my grandmother to read. She would pick up an Armenian newspaper and read the death notices with envy: “Look how fortunate they are,” she’d say. “They at least know where they were born and when.”

Everything about me, good and bad, I can trace back to my grandmother. And much of it is painful. To have caused that kind of lifelong suffering to survivors of the genocide and to us — their children and grandchildren — and then to deny it all, and say this is fabricated history? That, too, is criminal.

Why don’t the Turks just say “The Ottomans did this. We’re not the Ottomans?”

Exactly. At the very beginning of the Republic of Turkey, they actually put dozens of regional governors and the generals who perpetrated the genocide on trial in Istanbul, and most were found guilty. These were documented Turkish trials. But soon after, the Kemalist government moved to create a national narrative of immaculate conception, a homogenous republic based on the premise that there are only Turks in Turkey. There are no minorities: “How could we have killed Armenians? There were no Armenians here.”

Of course. Armenians were an integral part of the culture, fabric and economy of Turkey. Grand edifices — the Dolmabahçe Palace along the water — were built by Armenian architects. Photographers, educators, tailors, merchants throughout the country were Armenian. The linguist who created the new Latin version of the Turkish alphabet was Armenian. The guy who first recorded Turkish ethnographic music was Armenian.

How could so much history be forgotten?

It’s partly due to the fact that the Ottoman past, together with its alphabet, was discarded to create a new Turkish narrative.

Two years ago I went on a bus tour with a Turkish foundation director and two documentary filmmakers. We went to universities in Eskişehir and Ankara. This was an amazing experience for me. We showed two films about the Armenian Genocide, orphans and survivor memories. The filmmakers spoke, we answered questions. It went on for five hours, and the students in the audience didn’t move. You could read their faces, see the questions in their eyes. It went from “Oh my God, these things happened?” to “Really? How come I didn’t know about them?” to “Who’s been keeping this from me?” to “Am I somehow responsible?” and “What do you want from me?” These were students at the top universities. They were not hostile. They were a complete tabula rasa.

Some Turks in the southeast and east — in regions where Armenians were once a majority — know well what happened. When we go to visit and explore there, they’ll say things like “Do you want to see your church?” Or they’ll offer you fruit and say “Eat. It’s yours.”

It isn’t just Armenians who are affected by this rejection of identity and memory, but Turks, too. It is estimated that some 2 million people in Turkey have Armenian roots. Slowly, as grandmothers and grandfathers are dying, they are confessing to their families that they were originally Armenians, made to convert and change identity as children. Their descendants deserve to have their identities respected and accepted. Accusing someone of being Armenian is a serious insult in Turkey today. That foments further violence.

Do you think this will be resolved in our lifetime?

Yes. Turkey will get there because Turks will demand it, not for the sake of Armenians, but for their own sake: Because they want a country that’s democratic, that’s open about its past, that’s not built on lies or crimes, but is willing to acknowledge that we were all a part of that country.

Some of the best scholarship surrounding the Armenian Genocide, its causes and consequences, is produced by Turks, Kurds, Israelis, Germans and many others who recognize the importance of this critically important topic. The taboo has been broken by Armenians who live in Turkey — especially by public intellectual and newspaper editor Hrant Dink, who was assassinated there in 2007. The foundation named for him encourages further study of the role of Armenians in the Ottoman Empire and in the Republic of Turkey, with an eye toward bringing better understanding between the peoples involved.

Somber ceremony includes Russian, French presidents and dignitaries from around the world.

The director of USC’s Institute of Armenian Studies recounts a dark, unresolved chapter of Turkish history.

A hundred years after the Armenian Genocide