Video games for health are not just for fitness gamers who’d rather stumble through Zumba alone than with a judgy gym rat.

Clinicians and game developers at USC are teaming up to advance and validate video games for rehabilitation, a segment in the games-for-health industry that is helping stroke patients, paraplegics and others regain their dexterity through play.

The USC therapists and technicians have teamed to develop Mystic Isle, a game that quantifies and tracks patients’ movement in space as they tackle a series of rehab exercises.

Mystic Isle is being played in clinics all over the world as patients recover from the physical and cognitive effects of stroke.

“The neat thing is that this game has come from us, the clinicians. USC has all of these really great technologies, so it’s great that we can collaborate and make something really fantastic,” said Rachel Proffitt, an assistant professor in the USC Mrs. T.H. Chan Division of Occupational Science and Occupational Therapy who leads the Game-Based Rehabilitation Lab at the USC Institute for Creative Technologies.

This weekend, Proffitt will present the role of occupational therapists in software development during a poster session at the American Occupational Therapy Association’s 95th annual conference in Nashville. 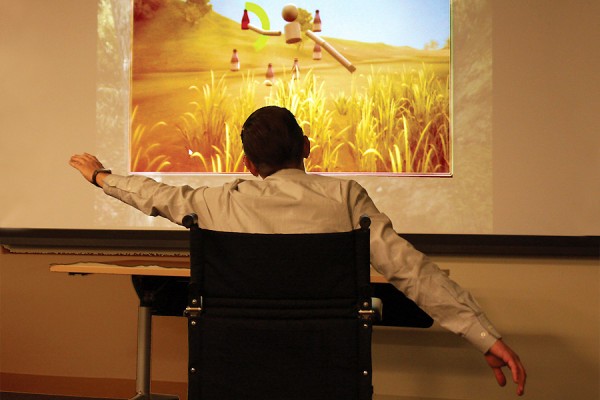 Mystic Isle is designed to improve performance and participation for people in rehab. (Photo/Rachel Proffitt)

“A lot of institutions are starting to recognize that treating these patients needs to be an interdisciplinary effort. And I think that’s what we tend to do well here at USC,” Proffitt said. “I work with people in engineering, physical therapy and in gerontology.”

Returning solders and veterans are among the populations that stand to benefit from Proffit’s research, which is funded in part by ICT’s contract with the U.S. Army Research Lab.

The Game-Based Rehabilitation lab is just one USC facility in which interdisciplinary games-for-health projects are underway.

The USC School of Cinematic Arts is also home to the Creative Media & Behavioral Health Center at USC. There are several other cross-discipline collaborations among faculty who are working in health games research at the Keck School of Medicine of USC, the USC School of Social Work and the USC Annenberg School for Communication and Journalism.

Virtual reality games are great in that they motivate physical therapy patients who might not exercise as well, or at all, without the games as a guide. But Proffitt is quick to point out that games for rehab, while fun and engaging, should actually work.

“When the Wii came out, therapists were like, ‘Let’s use it! Let’s go!’ but we didn’t really understand how best to use it or why,” Proffitt said. “We have this term: active ingredient. We’ve used games in VR, but we haven’t really stopped to determine the exact components in virtual therapy treatment that lead to change.”

Proffitt is part occupational therapist, part game developer — a personification of interdisciplinary research that USC is known for in biomedical and health informatics.

A lot of companies and researchers have put games out into clinical practice before running realistic trials.

She is also one of a few researchers in leading occupational science programs in the United States who is working to validate video games for rehabilitation.

“A lot of companies and researchers have put games out into clinical practice before running realistic trials,” Proffitt said. “Sometimes they run a trial on a very specific population — people who are post-stroke with no aphasia or cognitive deficits who have perfect vision at age 60. But when you bring the game out into the real world, there’s often a problem of translating it to the more heterogeneous population of people after a stroke who do have aphasia and cognitive defects.”

The player’s body is calibrated to the game, and the clinician predetermines the patient’s specific physical and cognitive goals, customizing the level of difficulty for each goal. The game can incorporate memory tasks and attention tasks, requiring the player to add numbers, sort things by color or choose an opposite word.

Every person has their own unique set of games that work for them. And that’s how we do therapy.

“Every person has their own unique set of games that work for them. And that’s how we do therapy,” Proffitt said. “It’s client-centered care.”

Unlike off-the-shelf fitness games, Mystic Isle can be played sitting or standing, making it usable for patients in wheelchairs.

Patients can be in a tall kneeling position, reaching out for virtual objects while on their knees. They can stand on foam or a hard surface; they can sit on a bouncy ball and play. Gameplay is paced in a way that players with cognitive deficiencies won’t be overwhelmed.

The goal is to ensure that the patients are “successful and have fun and enjoy it. So it’s not too hard, it’s not too frustrating. It’s not too easy and boring. And it’s at what we call the ‘just right’ level of challenge in occupational therapy,” Proffitt said.

As the patients are immersed in play, the Microsoft Kinect console is collecting data and recording the XYZ coordinates of each joint at 30 frames per second.

“Traditionally, when I have somebody doing exercises, I can watch them and get sort of an idea of how I think they’re doing, but I don’t have those exact numbers and measurements unless I stick them in a motion-capture lab,” Proffitt said. “But this is not just a static range-of-motion measurement with a goniometer in the clinic, where I have to have them hold their arm up for 10 seconds while I adjust everything. These are dynamic movements that the game is tracking.”

The comprehensive data is a key feature of the game, allowing therapists to have a replay of the patients’ performance to chart their progress and to make data-driven decisions on tasks for the next session.

My thing is using these fun, motivating ways to get people to get up and be active.

“This could be something that somebody plays at home and their clinician could have a version in the office,” Proffitt said. “The Kinect could transmit data online and clinicians could monitor their patients’ progress.”

Mystic Isle isn’t ready for the market yet — it’s still being used in clinicians’ offices for feedback and development. The game has been explored by patients throughout the country — from Long Beach to New Jersey — and around the world from Brazil to Germany.

“My thing is using these fun, motivating ways to get people to get up and be active,” Proffitt said. “Gaming can be a way to get them to want to do their therapy because it’s fun and they know they’re getting better.”

Alan Jette, professor of health policy and management at the Boston University School of Public Health, discussed a rapidly changing environment in the profession of physical therapy.