It is April 1975, and Saigon is in chaos. At his villa, a South Vietnamese army general is drinking whiskey and, with the help of his captain, drawing up a list of those who will be given passage aboard the last flights out of the war-torn country. Among them are the general and his compatriots, who escape Vietnam to start a new life in Los Angeles. They are, however, unaware that the trusted captain is a conflicted Communist sympathizer who is secretly observing and reporting on the group to a superior in the Viet Cong.

Published on April 7 to coincide with the 40th anniversary of the fall of Saigon, USC Associate Professor Viet Thanh Nguyen’s first novel The Sympathizer (Grove Press, 2015) tells the story of the captain. The title character is a man who was brought up by an absent French father and a poor Vietnamese mother, a man who went to a university in America, but returned to Vietnam to fight for the Communist cause.

The novel is my revenge on all the stories about the Vietnam War I grew up with ….

“The novel is my revenge on all the stories about the Vietnam War I grew up with that were always portrayed from an American point of view,” said Nguyen, associate professor of English and American studies and ethnicity at the USC Dornsife College of Letters, Arts and Sciences.

He noted that from Hollywood films and American novels to what he read about the war in college, Nguyen believed that these accounts offered a very particular kind of American story that didn’t capture what he heard from his own family and from the Vietnamese people he knew in the United States.

So Nguyen set out to write a novel that tells the story of the war from a different perspective, one that takes into account both the winners and losers on the Vietnamese side.

The result is a gripping spy thriller, an astute exploration of extreme politics and a poignant love story. Exploring a life between two worlds, Nguyen’s book also examines the legacy of the Vietnam War in literature, film and in the wars we are still fighting.

The book has already attracted considerable attention. Selected as an Amazon Best Book of the Month for April, it was reviewed on the front page of The New York Times Book Review on April 2.

Seeing both sides of the story

As the son of Vietnamese immigrants who escaped the fall of Saigon to come to America, Nguyen experienced a childhood that was steeped both in the culture and the history of the war. 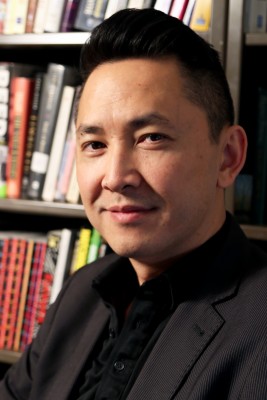 I’ve been thinking about the Vietnam War all my life.

“I’ve been thinking about the Vietnam War all my life,” said Nguyen, who was born in Vietnam. “I started watching things like Apocalypse Now and reading books about the war when I was 10 or 11.”

So when his agent encouraged him to write a novel, he didn’t have to look far for the subject.

“I knew immediately that I wanted to write a novel about a spy because I thought a spy story would be a good way to tell this history in an entertaining way. Much of this novel is based on things that really happened, so it was a matter of finding the character that would allow me to string together these events in the plot,” Nguyen said.

His choice of a protagonist was also driven by his desire to tell a story about divisiveness that was not in itself divisive.

“I needed a character who could see all issues from all sides,” Nguyen said. “A character who is committed as a Communist spy but who is also aware of the tragic situation he finds himself in. He doesn’t see things as right versus wrong as so many people did. Instead, he sees things as right versus right because he can sympathize not just with his own side, but also with his enemies.”

Nguyen’s unnamed narrator-protagonist is a spy divided between worlds, literally because he is half-French, half-Vietnamese, but also ideologically because he is a Communist who has spent a lot of time in the United States, has many American friends and knows American culture. He also has many South Vietnamese friends and understands their motivation.

Nguyen’s novel is thus the story of a man of two minds, someone whose political beliefs clash with his individual loyalties. Both a cerebral thriller and a social satire, it compels the reader to look at the Vietnam War in a different light by focusing on characters and stories with which many Americans are not familiar.

Philip Caputo, writing in The New York Times Book Review, compares Nguyen’s skill in portraying the ambivalent personality of his central character to that of Joseph Conrad, Graham Greene or John le Carré. In its final chapters, Caputo writes, “The Sympathizer becomes an absurdist tour de force that might have been written by a [Josef] Kafka or [Jean] Genet.”

Much of the book was a response to Heart of Darkness and part of it was a parody of Apocalypse Now.

“All of them, with the exception of Genet, I thought about a lot while I was writing the novel,” Nguyen said. “Much of the book was a response to Heart of Darkness and part of it was a parody of Apocalypse Now, so there was a whole chain of references going back to Conrad. I read Greene’s Quiet American when I was in college and wrote a thesis about it.”

An interrogation sequence in Nguyen’s novel was inspired by Kafka’s short story “In the Penal Colony.” As for le Carré, Nguyen said his book owes a lot to genre fiction, thrillers and spy stories.

Nguyen’s own life story, in particular his early childhood, is dramatic enough to be the basis of a novel of its own. Born in Vietnam, he was 4 years old when his town was the first seized by the Communists. His father, Joseph Thanh Nguyen, was in Saigon at the time and his mother, Linda Kim Nguyen, fled the family home with Nguyen and his older brother, walking more than 100 miles to Nha Trang, the nearest port town.

From there they managed to get on a boat to Saigon, where they were reunited with Nguyen’s father. Forced to flee once again when Saigon fell to the Communists, the family sailed to Guam before being flown to a refugee camp in Pennsylvania.

Subsequently separated from his parents and his brother, Nguyen was sent to live first with one American sponsor and then with another.

Nguyen remembers it as a traumatic time. “It probably only lasted four months, but I was just 4 years old and being apart from my parents felt like an eternity.”

Nguyen’s parents had been successful merchants in Vietnam but had to start again from scratch when they arrived in the United States. Once they found employment, they were able to reunite the family and spent a few years in Harrisburg, Pa., before moving to San Jose, where they opened one of the city’s first Vietnamese grocery stores.

Nguyen got his first taste of writing fiction when he won a prize in the second grade from the San Jose Public Library for a story titled “The Adventures of Lester the Cat.” He continued to write sporadically throughout high school and while studying English and ethnic studies at the University of California, Berkeley, where he also earned his Ph.D. in English.

“I wanted to be a writer but wasn’t focused enough in college, and that’s why I decided to become a critic first,” Nguyen said. “That focus gradually developed in my early years as a professor, and by the time I got tenure, I was ready to write fiction with much more dedication.”

The Sympathizer is destined to become a classic and redefine the way we think about the Vietnam War and what it means to win and to lose.

“The Sympathizer is destined to become a classic and redefine the way we think about the Vietnam War and what it means to win and to lose,” Boyle wrote.

Nguyen began by writing a two-page synopsis that became the road map for the book.

“I knew the general arc of the novel before I started writing, except for the ending,” he said. “I just had to trust myself that once I got there, I would be able to figure it out.”

Every day he got up, wrote for a four-hour stretch and then went to the gym and ran.

“Running was crucial,” Nguyen said. “Even though I had a road map for the novel, it still felt as though I was driving along a dark road. The headlights only showed so much of the path ahead, but the running would propel me forward and I could see more and more of where I was heading.

At night I couldn’t wait to go to sleep so I could wake up in the morning and start writing again.

“At night I couldn’t wait to go to sleep so I could wake up in the morning and start writing again.”

It took him two years to write the book. After the first year, his wife, Lan Duong, announced she was pregnant.

“Our baby’s arrival became the deadline for completing the book,” said Nguyen, who finished the first draft two days before his son, Ellison, was born.

If readers take away one thing from his novel, Nguyen hopes they reflect on the idea that nurturing a single-sided viewpoint is what draws us into conflict and war.

“To be capable of seeing things from multiple points of view,” he said, “to be capable of being sympathetic, not just with our friends but with our enemies, is perhaps not enough to prevent wars or to change the world, but it is certainly necessary if we want those things to happen.”

Alumna turns up heat on climate change in Vietnam

A candidate in the professional doctorate program at the USC Price School of Public Policy is taking steps toward finding a solution to climate change in Vietnam.