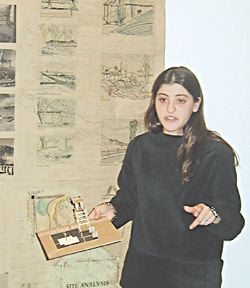 Dganit Shtorch, a graduate student in the Historic Preservation Architecture Program, proposes rebuilding the wooden guard towers that once stood at the Manzanar World War II internment camp. USC architecture students are working with national park officials on plans to develop the historic site as a park.

In 1945, the U.S. War Relocation Authority closed Manzanar and sold all but one of its structures for scrap – nearly erasing every tangible reminder of the World War II internment camp.

But if a USC student gets her way, the wooden guard towers that once loomed over the Inyo County facility will be rebuilt to commemorate what Manzanar meant to the 11,400 Japanese-Americans who were interned there following Japan’s bombing of Pearl Harbor on Dec. 7, 1941.

“I can’t think of a single structure that would more clearly represent the invasiveness of the camp experience,” said Dganit Shtorch, a graduate student in the Historic Preservation Architecture Program. “The internees could do nothing without being observed.”

Shtorch’s proposal is just one result of a collaboration between USC architecture students and the park officials in charge of the 840-acre Manzanar site, which Congress designated as a National Historic Site in 1992. The National Park Service’s Manzanar Advisory Commission has been charged with coming up with plans to develop the site as a park.

In preparation, the students made several trips to the camp site near Death Valley at the foot of the Eastern Sierra. They also visited the nearby Eastern California Museum in Independence, where relics of the Manzanar camp are housed.

“We were fortunate to get in on the ground floor of a project of such historical significance,” said Breisch, director of the School of Architecture’s Historic Preservation Program. “It gave our students a rare opportunity and the freedom to explore.”

“For a practicing professional, this would be a very nice commission – the chance of a lifetime,” said Stein, director of the Landscape Architecture Program. “An exercise such as this clearly demonstrates to students that a successful architectural project must intimately relate with its cultural and natural environments.”

In addition to the plan for reconstructing all eight guard towers, the students’ recommendations included:

• Restoring the fruit orchards that gave the area its name. (Manzanar is Spanish for apple orchard.)

• Restoring flower and Zen gardens planted by the internees.

• Preserving the only building remaining from the internment era – an auditorium constructed by the internees themselves.

• Highlighting the drama of the site’s chief draw today – an obelisk commemorating the internees who died in the camp.

These proposals impressed Richard Stewart, a member of the Manzanar Advisory Commission. “You have given me a lot of insights into what we’re dealing with,” he told the students following a Dec. 15 presentation.

Stewart, who chairs the commission’s subcommittee devoted to site interpretation and development, hopes to persuade fellow commission members to allow the students to make a presentation to the full body. He also hopes the National Park Service will someday display the students’ site plans, architectural drawings and scale models in the Manzanar park.