How you can help

You can help support #TEAMjeff’s efforts by making a donation or buying a #TEAMjeff T-shirt (all proceeds benefit Jeff Julian and his family). To find out more, visit the #TEAMjeff website.

The words hung over the Rose Bowl Aquatics Center pool: “I believe. I’m strong. I’m ready. I will win.”

Uttering the mantra was Jeff Julian ’97, the Rose Bowl Aquatics head coach. But the swimmers hearing it weren’t there for competition and the words weren’t a battle cry.

Instead, the collective group known as #TEAMjeff – 200 swimmers gathered around 10 Olympians – was there on March 8 to raise money for Julian, 40, a non-smoker who two months earlier took to social media to inform family and friends that had been diagnosed with Stage IV lung cancer.

Swimming pools have always served as an extension of home for Julian, with teammates, coaches and friends earning “family” status. At age 5, Julian joined the Arcadia Riptides, his first foray into competitive swimming, a journey that would continue to Industry Hills Aquatics Club and Walnut High School with accolades acquired along the way, including eight-time CIF champion and All-American status in multiple events. 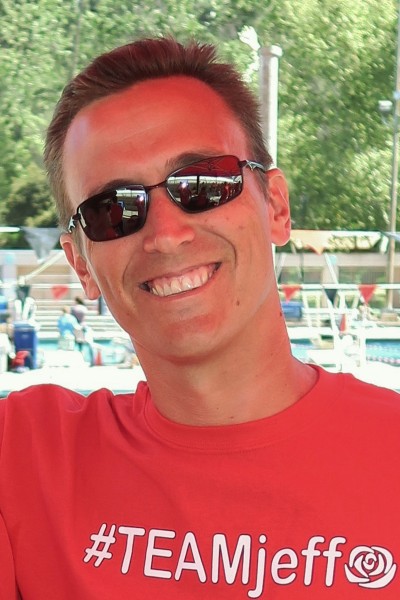 Later he would marry Kristine Quance, captain of the USC women’s swim team.

“From the time we were 11 years old, we were always at the same meets and in the same pools,” Quance-Julian said. “It wasn’t until our senior year at USC, though, that we started dating.”

After graduating from USC, Julian became a business development strategist. Heeding his true calling, he joined the staff of Rose Bowl Aquatics and later became its head coach, in 2004. There, his swimming family continued to grow.

Julian’s revelation about his cancer diagnosis served as a call to action to the close-knit swimming community. Before the March 8 fundraiser that began being called the “Olympic Swim Clinic,” Julian’s buddies — many of them former USC swimmers — joined him in Pasadena for a weekend. That didn’t surprise Casey Barrett, who shared a lane with Julian at USC from 1993-95.

“Swimmers are a tribe,” Barrett said. “It’s part of our identity. We speak the same language and have the kind of friendships where, even if you haven’t spoken in a year, you pick up right where you left off.” Reiterated Julian, “My teammates from four years of swimming at USC have been best friends throughout my life.”

After learning about Julian’s cancer, a member of that tribe – four-time Olympian Jason Lezak – sprang into action, mobilizing the swimming community.

Despite the 30 Olympic medals represented at the event, it was Julian who most impressed Lezak: “You can see the pain he’s in and hear about some of the setbacks, but remarkably, Jeff puts a positive spin on things.”

As a Trojan, you know you can always turn to that family. Feeling that bond was very humbling.

Krayzelburg found Julian’s positivity to be infectious. “What people took away – words of wisdom, inspiration and strength,” he said. “As a Trojan, you know you can always turn to that family. Feeling that bond was very humbling.”

Quance-Julian agreed. “Jeff has drawn a lot of strength from both the USC and swimming communities,” she said. “The feedback, support, resources, stories and connections have been amazing.”

In that mix is oncologist Barbara Gitlitz of the Keck School of Medicine of USC. “Jeff’s first oncologists told him he had months to live and to get his affairs in order,” Quance-Julian said. “Dr. Gitlitz was more proactive and hopeful.”

Julian is undergoing a clinical trial in immunotherapy at UCLA with oncologist Jonathan Goldman, who has joined forces with Gitlitz.

“There are so many gifts I’ve received through this journey,” Julian said. “Getting to hear that I’ve had an impact and inspired people means a lot.”

Summing up things nicely was Naber, master of ceremonies at the Olympian event: “Supporting Jeff and his family is as the saying goes: ‘A trouble shared is half a trouble. A joy shared is twice the joy.’”

With $300 million raised, the department’s Heritage Initiative meets its Campaign for USC goal.

The donation will develop personalized medicine to battle the disease and support the research of David Agus.

Fasting and less-toxic cancer drug could be alternative to chemotherapy

In back-to-back studies, researchers show how fasting combined with a class of cancer-inhibiting drugs can starve colorectal, breast and lung cancer cells.

The creation of Buckybombs could one day be used for demolition of cancer cells.