What do you get combining the work of contemporary composers like Thomas Adès and avant-garde filmmakers such as David Lynch?

In a way, visual music is a very old idea.

The Canada-based Penderecki String Quartet sailed through five challenging musical compositions as film excerpts and animated videos were projected onto the screen behind them and on either side of the stage. Sounds and images worked in harmony to tell stories and create moods in dramatic fashion.

“In a way, visual music is a very old idea,” said Marek Zebrowski, director and curator of the USC Polish Music Center. “It originated from silent film, so it’s a revival of an old idea, which is all the more exciting because these days everything is so produced, down to the last iota, down to the 10th of a frame, and now we are coming back to a raw and visceral way of hearing live music and watching images at the same time.” 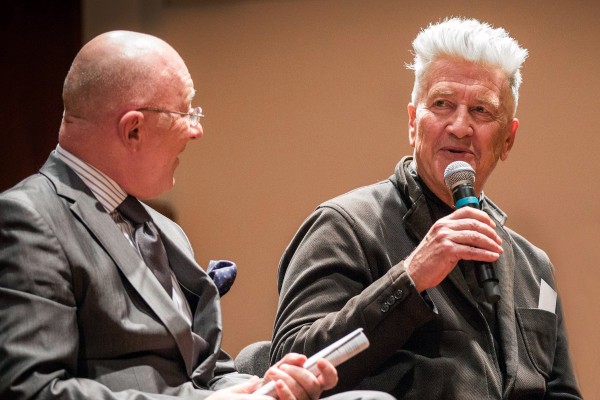 Patterson and Reckinger spent months envisioning and creating animation for “Kirugi” by Jeffrey Holmes, midaregami (Tangled Hair) by Krausas and Arcadiana by Adès. Later, they explored the meaning and energy of the pieces in rehearsal with the Penderecki String Quartet.

The experience reminded the couple of their work together producing videos for MTV in the 1980s, several of which, including their groundbreaking animation for A-ha’s “Take on Me,” are now in the Museum of Modern Art’s permanent collection. They said those pop artists trusted them to unleash their creativity, just like these composers did.

“This is a very special hybrid experience we are creating,” said Reckinger, who also worked with Patterson on a recent visual music project with well-known conductor and Michael Tilson Thomas ’67, ’76 MM, Judge Widney Professor of Music at USC. “What visuals do is create a world and a way to enter the music, where you start to feel and perceive the form and understand the music more,” she added. “It cushions the audience, it envelops them, it intrigues them, it invites them in.”

Through Patterson and Reckinger’s animation, audiences were drawn into worlds of nature and abstraction, Japanese poetry and dancing skeletons. Their imagery opened doors to audiences unfamiliar with contemporary or operatic music.

“With the atonal soprano parts in Veronika’s work, or certain intricate or asymmetrical parts of Tom’s work, or the driving, tearing, erratic moments in Jeffrey’s work, we would pair those sections with lyrical, beautiful moments in the visuals,” Patterson said.

“It was very exciting to get a new perspective on the music with new visuals,” said Krausas, who originally composed the piece as visual music for the string quartet. “I think it adds a sixth element because there are four strings, a voice and the visuals, and they all complement each other really well. They can stand alone, but combined it makes the experience so much more.”

First violinist Jeremy Bell was excited by the collaboration: “We’ve done a lot of work with visuals before, but nothing at this level of sophistication.”

The other collaborations worked somewhat differently.

Scenes from new wave French cinema director Agnès Varda’s Vagabond, a film on many top 100 lists, came to life with the sounds of Joanna Bruzdowicz’s “La Vita.” Bruzdowicz, a Polish composer who lives in France and who has been involved with USC Thornton for more than 30 years, said that Varda discovered the piece in a record store on Paris’ Avenue des Champs-Élysées and asked her to compose music in the same vein for her film.

The collaboration behind Marek Zebrowski’s Music for David, which was composed to accompany Fire (Pożar), a short film written, directed and animated by David Lynch, unfolded in yet a different way entirely.

“The whole point of our experiment was that I would say nothing about my intentions and Marek would interpret the visuals in his own way,” Lynch said. “So I say it was a great successful experiment, and I loved the composition Marek wrote for the Penderecki String Quartet.”

Fire is typical Lynchian surrealism, beginning when a man with a skeletal face and elongated arms lights a match.

“I thought it was a very melancholic film in a certain sense and also very poetic,” Zebrowski said. “Without trying to be too explicit, I tried to illustrate further what David was doing. For example, there is something that looks like a hailstorm, and I used a lot of pizzicato, but I also used a soaring melodic line to add a lyrical element to it.”

Zebrowski and Lynch have collaborated extensively, traveling the world with their live concert improvisations and recording an album, Polish Night Music, and even broadcasting a weather report from Lynch’s home studio.

As the USC Polish Music Center celebrates its 30th anniversary, Zebrowski has his eyes and ears set on the future of live music.

“I feel like we should do this concert two or three times, and outside of this campus so the public at large could see this and be at once transported back to the 1920s and exposed to brand-new technology and live music making,” Zebrowski said. “We have to make sure that live music still has a place in today’s contemporary cultural landscape.”

An Italian master’s student captures a one-piano, eight-hands performance in the Hamptons.

Who wouldn’t want Randy Newman as a musical mentor?

One lucky alum’s 15-minute sit as part of a USC Thornton program turns into a melodious two-hour meeting.

Music and movies come together for Measures & Frames