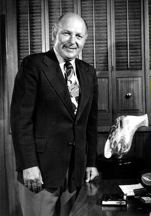 Robert J. Pasarow, age 82, a leading Southern California business and philanthropist, died Jan. 13, of complications from Parkinson’s disease.
A philanthropist leader, “Bob” Pasarow, as he was known to his family, friends and thousands of employees, was president of the Norris Cancer Research Association and gave substantially to the Keck School of Medicine.
He supported many medical institutions including the UCLA Medical School, Good Samaritan Hospital of Los Angeles and the San Pedro Hospital. A chair has been established in his honor at the Keck School for research into Parkinson’s disease.
Pasarow is survived by his wife of 62 years, Claire, his four children Michael, Susan, Anthony, and Jay, his sister Cecile; 13 grandchildren, and three great grandchildren.
His brother, Alan, preceded him in death.
Born in San Francisco in 1917, Pasarow served in the U.S. Army in World War II. He started a food processing business in Los Angeles, CHB Foods, which grew steadily. In 1970, the company sold shares to the public, which were listed on the American Stock Exchange.
CHB processed a wide variety of food, including tomatoes and beans in the San Joaquin Valley and tuna under the name of Pan Pacific Flaheries on Terminal Island, one of the last tuna canneries in California.
Pasarow was especially well regarded by California fishermen, whose causes he championed.
In his later years, Pasarow supervised the activities of the Robert J. and Claire Pasarow Foundation, which annually awards substantial prizes for medical research in the areas of cancer, heart disease and neurosciences.
The recipients of the Pasarow Awards are leading researchers in these fields. For many years and the Pasarow Award winners have presented lectures here.
Claire has been a full partner in all of these philanthropic activities, particularly those of the Pasarow Foundation.