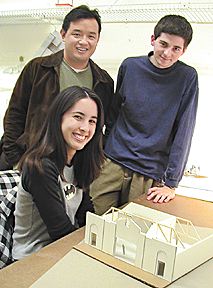 Community Design students Aja Lippincott, left, and Joe Davis with their studio instructor, architect Ken Kurose. The students say that basing their studio in the community surrounding USC helped them with such class assignments as a proposed remodel of the 24th Street Theatre lobby.

When the 24th Street Theatre decided to remodel its lobby, the nonprofit organization north of campus didn’t have to look far for advice.

Architect Ken Kurose, a lecturer in the School of Architecture, dispatched 15 students from his Community Design course, which occupies one of four turn-of-the-century storefronts across Hoover Boulevard from the community theater.

For the fall semester’s first assignment, the fourth-year architecture students came up with five distinct sets of recommendations.

“It helped us look at the lobby in a new way,” said Jon White-Spunner, the theater’s founding director. “We’re probably going to go with a combination of the student proposals.”

In the two years since several USC classes and faculty offices moved to Victorian Village on Hoover at 24th, architecture and public arts students have found the nearby community to be a compelling and receptive laboratory. The activity has meant an increase in foot traffic for local businesses and a heightened awareness of community redevelopment efforts.

“Being off campus improves our relationships with the community, which we hope will result in beneficial projects for the community,” said sculpture professor Jay Willis, director of the public arts program.

“The integration into the neighborhood is wonderful for everyone,” said USC alum Anne-Merelie Murrell, who owns the 24th Street Theatre building as well as the artfully restored storefronts USC leases where Union Avenue and Hoover intersect, forming a block-long, triangular park.

The architecture and public arts studios are a focus for service learning activities that Dean Robert Timme describes as “getting an education in urban renewal by living it.” Hard-pressed to find adequate space for its more than 530 graduate and undergraduate students, the school opened studios for landscape architecture and four-year special topics programs when space became available in Victorian Village in the fall of 1998.

Shortly afterward, Paul Tang and Yo Hakomori, two practicing architects who teach architecture at USC, moved their firm from Culver City into Victorian Village, enabling them to expand their practice and employ USC interns.

While some students say they feel isolated from campus, others are enthusiastic. “It seems more like the reality we’re going to move into [when we graduate],” said Joe Davis, a student in last semester’s Community Design studio.

Davis and fellow fourth-year student Aja Lippincott suggested a lobby remodeling project that was popular with 24th Street Theatre administrators. Davis credits the success of their vision – which included erecting a freestanding wall to hide unsightly pipes and route lobby traffic – to the studio’s proximity to the project.

“I looked at the theater six times,” Davis said. “That’s a lot for a two-week project.”

Proximity also made a key difference for public arts master’s degree candidate Carrie Roche. For her class project last semester, she only had to look out the window of the Public Art Studies Urban Studio. Instead of a barren traffic island, Roche saw the makings for an “Art Triangle,” a 20-page plan that proposes a USC Neighborhood Outreach grant to fund a public arts project. The theme: USC’s community involvement.

“It’s a great opportunity to present the area with a gift,” Roche said.

Boosting the community is a natural byproduct of the faculty’s desire to create a stimulating learning environment for students. And neighbors seem happy about it.

After Murrell dressed up the storefronts she owns with new lights, awnings, planters and cheery, multicolor paint schemes, they sat vacant for two years while she hoped for tenants “who would be supportive of the architecture and the arts.”

“I was delighted when [USC] moved in – one can only hold out so long,” said Murrell.

Meanwhile, Pete’s Burger, a hamburger stand at 24th and Hoover, flourished. The in creased foot traffic allowed owner Pete Zinellis to expand his menu, start a catering service and remodel his 28-year-old business. “I know the students try to help the neighborhood and improve it,” said Zinellis. “I try to do it, too.”

The School of Architecture has one more project in mind that might prove to be a capstone on the neighborhood upgrade: The school has leased a decommissioned water and power distribution station that is listed in the National Register of Historic Places. School administrators hope to upgrade it for use as a base for public outreach and clearinghouse for information on renewal projects for the central city area.