The day Jennifer McCallson’s world turned upside down plays in her mind like a silent film.

The auditorium is rocking with hundreds of high-schoolers on the edge of their seats, pumping up their role models and mentors – college-level cheerleaders in a fierce competition. The finishing number is a showstopper. McCallson opens her palms and lets the energy run through her. She takes off at dizzying speed, gaining momentum – a progression of tumbling passes. She is a treat to watch.

Started in 1981 to help injured All-American swimmer Mike Hyeholt, Swim With Mike has since raised more than $15 million in scholarship funds for physically challenged athletes.

Then life starts to be counted in seconds, fractions, inches. In an instant, she collides midair with her male teammate. He lands on her neck, shattering her fifth cervical vertebra and crushing her spinal cord. She is fully conscious and instantly paralyzed from the neck down.

“One or two inches off, or seconds, and I wouldn’t be here,” McCallson remembers. “Just a slight alteration in my footing – it would have all been different.” A split second – fortuitous or calamitous, depending how you view it.

She was 20, and doctors told her she would never walk again or live independently, let alone participate in any of the sports she loved. Her athletic dream was over. “Move on with your life,” they said.

She’s been proving them wrong ever since. 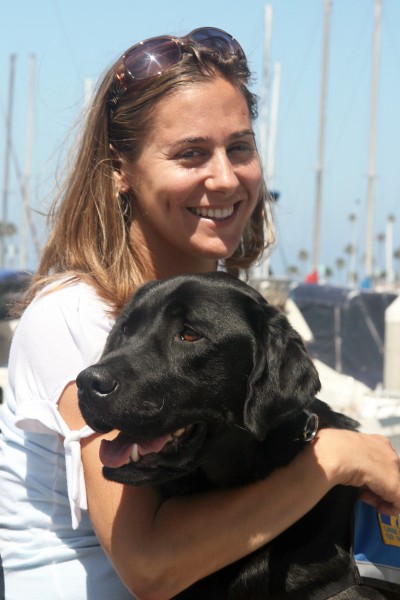 Since that day 15 years ago, McCallson has earned a bachelor’s degree in sports management with an emphasis in wellness and fitness. She hand-cycled a half marathon, snorkeled in the Great Barrier Reef, pedaled at a spin-a-thon, jet-skied in the Pacific and snow-skied on Purgatory Mountain in Colorado. She’s kayaked, swam and surfed. She’s been riding horses for the last four years.

And she volunteers tirelessly for organizations that serve people with physical disabilities. She has made it a matter of principle to encourage the mind to go wherever the heart dares.

“I’m not going to let my fear get in the way of what I’m about to do,” she said. “I’m going to have an amazing life, and it won’t be hindered by the fact that I use a wheelchair.”

Last year McCallson, now 35, enrolled in the USC Master of Social Work program with a scholarship from Swim With Mike. Since its first swim-a-thon in 1981 at USC, Swim With Mike has provided some 178 scholarships for physically challenged athletes at 85 universities.

Swim With Mike events across the U.S.

Founded at USC, Swim With Mike now has affiliated events around the country to benefit physically challenged athletes:

McCallson credits Swim With Mike with inspiring the dream to start her business, Roll With It, a corporate team-building organization that combines sensitivity training and universal design awareness. By using a wheelchair for a day, corporate executives learn skills they can use to expand their vision – and often increase their profits.

Through Roll With It, McCallson works to empower participants to move beyond their perceived limitations.

“Swim With Mike gave me the opportunity to expand my education and build a sustainable career for myself. More than that, they opened the entire USC family network to me, and that’s priceless,” she said.

With her positive outlook, you’d never imagine how many obstacles she had to overcome. Doctors crushing her hopes of ever walking again. Her insurance company denying physical therapy that required years, not just the allowed six weeks. A lack of support from her father, who struggled with drug addiction, and her mother, who defrauded her of a $1 million insurance payout and abandoned her. A boyfriend who walked away and broke her heart.

“Yes, I cried myself to sleep many times,” McCallson admits. “I cried until I was all cried out, then I said I’m not going to live in bitterness. I’m going to find something I’m passionate about and chase that – redirect all that energy toward that goal.”

This weekend, you’ll find McCallson doing just that. Alongside her black service Labrador, Sudo, who she credits for teaching her “to love again,” she will be cheering her fiancé Brady Rice as he competes in an ultra-50K-marathon up and down Oriflamme Canyon in San Diego County.

She may have been interrupted for an instant, but Jennifer McCallson is certainly rolling with it now.

Swim With Mike has accrued more than $15 million for the Physically Challenged Athletes Scholarship Fund.

Expectations are high as the team looks toward fall.

Forced to give up the game after a neck injury, motivational speaker Thomas Williams urges people to pursue their dreams in his new book.