To commemorate the 100th anniversary of the Armenian Genocide in April, the USC Shoah Foundation — The Institute for Visual History and Education will debut a monthlong series of testimony clips from survivors and witnesses of the 20th century’s first genocide.

One clip a day is being released on the institute’s website through the last day of this month, which is Genocide Awareness and Prevention Month. Included on the timeline will be the April 24 anniversary of the Armenian Genocide’s onset.

The clips will showcase some of the more than 400 testimonies from the genocide that will be integrated into the institute’s Visual History Archive, which contains 53,000 testimonies from survivors and witnesses of the Holocaust and other genocides.

To help put the clips into perspective, experts steeped in knowledge about the Armenian Genocide will introduce each one. The presenters will also recommend additional resources for those who would like to learn more.

Richard Hovannisian, one of the world’s leading scholars on the Armenian Genocide and adjunct professor of history at the USC Dornsife College of Letters, Arts and Sciences, introduced the first five clips.

This project will help preserve evidence of a genocide that must be acknowledged.

“This project will help preserve evidence of a genocide that must be acknowledged,” said USC Shoah Foundation Executive Director Stephen Smith. “It will honor the memory of those whose lives were taken, and it will ensure that future generations are able to learn from individuals who experienced the Armenian Genocide firsthand.”

In addition to the Web series, USC Shoah Foundation will also commemorate the 100th anniversary through the following events:

The institute’s Center for Advanced Genocide Research will take possession of its first major donation since it was announced in April 2014 by USC Shoah Foundation founder Steven Spielberg and USC President C. L. Max Nikias. The donation from attorney Vartkes Yeghiayan pertains to the historic agreement reached with New York Life in 2004 that resolved more than 2,000 insurance claims against policies issued by New York Life to Armenians in the Turkish Ottoman Empire before 1915. 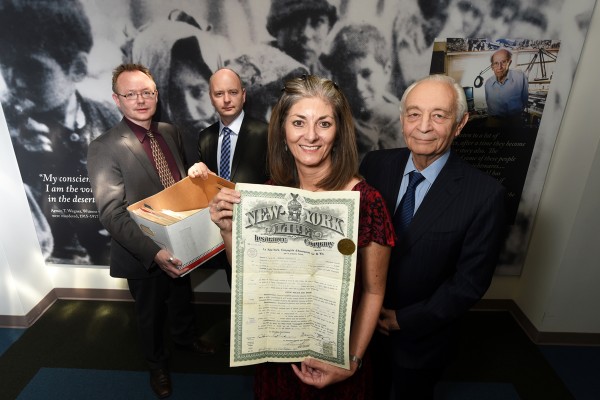 The 40-plus boxes of materials mark the first major acquisition by the center, which is seeking private papers, documents, photographs and films pertaining to genocides to expand the university’s position of being the only world-renowned private research institution with substantial original primary-source material from genocides.

On April 8, the Center for Advanced Genocide Research will hold a lecture with Ugur Ümit Üngör, associate professor of history at Utrecht University and research fellow at the Institute for War, Holocaust and Genocide Studies in Amsterdam. His topic will be “The Kurds and the Armenian Genocide: Collaboration and Resistance.”

Presented in cooperation with the USC Institute of Armenian Studies and DEFY: USC Shoah Foundation Student Association, the lecture will be held at 4 p.m. in the Ronald Tutor Campus Center, Room 450 — The Forum.

On April 24, a contingent from the USC Shoah Foundation — including Hovannisian, Smith and Wolf Gruner, director of the Center for Advanced Genocide Research — will travel to Armenia to participate in official commemoration ceremonies and to further work on bringing the Visual History Archive to that country.

On April 26, Smith will join thousands of Armenians commemorating the 100th anniversary with a special observance at the annual Armenian Genocide Commemoration in Times Square New York.

The 400 Armenian testimonies being integrated into the Visual History Archive were filmed by J. Michael Hagopian and the Armenian Film Foundation between 1972 and 2004 when most of the survivors were in their 70s and 80s. Testimonies in the collection, the largest archive on film of Armenian Genocide interviews in the world, were recorded in 10 countries and 10 languages, including English, Armenian, Arabic, Kurdish and Turkish.

“Thanks to the foresight of Dr. Hagopian, the stories of the Armenian Genocide cannot be denied,” said Carla Garapedian, who is leading the Armenian Film Foundation’s work to preserve and integrate the collection into the Visual History Archive. “These survivors all have important stories to share, and now they will reach a far wider audience.”

The Armenian testimonies were first delivered to the institute in April 2014 to begin the integration process into the Visual History Archive, which included indexing all the testimonies. At the core of USC Shoah Foundation’s indexing system is a one-of-a-kind thesaurus, which includes more than 62,000 terms that describe genocide-related concepts and experiences that cover the Holocaust, Rwandan Genocide and Nanjing Massacre, all experiences reflected in the Visual History Archive.

Hagopian was an Emmy-nominated filmmaker who made 70 educational documentaries. Seventeen of his movies centered on Armenian culture and history, including an epic trilogy on the Armenian Genocide composed of “Voices From the Lake,” “Germany and the Secret Genocide” and “The River Ran Red.”

He was a survivor of the genocide that killed an estimated 1.5 million people in Turkey from 1915–23. In 1979, he founded the Armenian Film Foundation, a Thousand Oaks-based nonprofit dedicated to documenting Armenian heritage. Hagopian died in 2010 at age 97.

The gift will support scholarship of a Ph.D. student examining Eastern Europe.

Stephen Smith and other Trojans help to commemorate the atrocity that claimed thousands of lives.

Listen to a century of voices on the Armenian Genocide